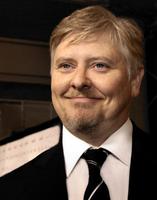 Dave Foley, actor, writer (born at Toronto 4 January 1963). Dave Foley dropped out of an alternative Toronto high school to do standup comedy at age 17. He joined up with Kevin McDonald at improv classes held at Second City Theatre, and they began working as a comedy team in the early 1980s. In 1984 they merged with Mark McKinney and Bruce McCulloch, another comedy team from Calgary, to form The Kids in the Hall along with a fifth member, Scott Thompson. The Kids became popular with their smart, edgy and gay-themed humour, performing regularly at the Rivoli Backstage on Queen Street West in downtown Toronto. They were brought to the attention of Saturday Night Live (SNL) producer Lorne Michaels, who was looking for a new sketch show to launch, and after a pilot successfully aired on the CBC in 1988, The Kids in The Hall television series was born and ran from 1989-94.

Some of Dave Foley's characters included Jocelyn, the French-Canadian prostitute; Bruno Puntz-Jones, Euro-trash man-about-town; manservant Hecubus; and the Polite Axe-murderer. Along with the other four Kids, he was responsible for writing and occasionally directing the series. It was nominated for three consecutive Emmy Awards in 1993, 1994 and 1995, and received nine Gemini Award nominations, winning three times, for best performance in a comedy program or series in 1989 and 1993 and best writing in a comedy program or series in 1989. Then came the series Newsradio on NBC from 1995 to 1999, with Dave Foley as Dave Nelson, the closet-Canadian station manager.

Over the years, Dave Foley has made numerous guest appearances on television shows such as Scrubs, Las Vegas, Will and Grace, King of Queens, Just Shoot Me!, Robson Arms, Little Mosque on the Prairie, Brothers and Sisters, The New Adventures of Old Christine and in the 1998 miniseries From the Earth to the Moon as astronaut Al Bean. In 2001 Foley returned to his roots, appearing along with Kevin McDonald in Sketch Pad, a television show highlighting improv comedy. The Kids in the Hall reunited in 2000, 2002 and 2008 for cross-country comedy tours, and fans were able to revisit some of their favourite characters from the beloved series. In 1996, the feature film Kids in the Hall: Brain Candy was released, and the eight-part miniseries Kids in the Hall: Death Comes to Town aired on CBC television early in 2010.

In 2002, Dave Foley wrote, produced, directed and co-hosted The True Meaning of Christmas Specials for the CBC, for which he received a 10th Gemini Award nomination, and from 2004-06 he hosted Celebrity Poker Showdown on American cable. In 2010 he voiced Wayne in Prep & Landing Stocking Stuffer: Operation Secret Santa, a seven-minute Emmy Award-winning animated short from Disney; Foley was also nominated for his voice work.