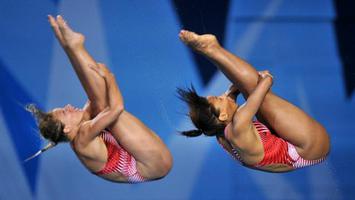 Diver Sylvie Bernier, gold medallist in the 3 m springboard event. At the 1984 Los Angeles Olympics, she won Canada's first gold in Olympic diving and the first-ever for a female athlete from Québec (courtesy Canada's Sports Hall of Fame, www.sportshall.ca).

Diving, the sport of plunging into water from a platform. It is an acrobatic sport, involving a series of spins and rolls performed while jumping off a spring or stationary platform, either solo or in tandem.

The sport of diving can be traced back to 400 BC through pictures on Egyptian and Roman vases. Plain diving was practised from cliffs to the oceans during the 8th to 10th centuries by Vikings in Sweden and later in the 1770s by Indians in Acapulco, Mexico. Between 1800 and 1820 a new form of the sport developed in Germany and Sweden. Acrobatic gymnastics over water was the beginning of the fancy diving known today.

Competitive diving is separated into men's and women's springboard and platform events. In springboard diving, competitors perform a set number of dives, each of which is marked on a scale of one to 10 by a panel of five or seven judges, leading to a final total score.

Competitive diving began in the 1880s in Germany and in 1904 became an OLYMPIC event, but it did not commence until the 1920s in Canada, under the auspices of the Canadian Amateur Swimming Association. In 1969 Vaughn L. Baird incorporated the Canadian Amateur Diving Association as a member of the Aquatic Federation of Canada, a development largely responsible for the continued growth of the sport, which is now practised in nine provinces.

Alfie Phillips was the first nationally recognized Canadian diver, winning 10 straight national championships 1926-35 and finishing 7th in both the 1928 and 1932 Olympics. During the 1940s and 1950s, George Athans, Bill Patrick and Irene MacDonald competed internationally for Canada. MacDonald won a bronze medal in the springboard event at the 1956 Melbourne Olympics and finished 6th at Rome in 1960. Beverley Boys won 4 Commonwealth gold medals in diving and was 7th in the 1968 Olympics, 5th in 1972 in the springboard and 4th in 1968 in the platform. Cindy Shatto was 5th in the platform event at the 1976 Montreal Olympics.

The crowning achievement of Canadian competitive diving was Sylvie BERNIER's gold medal in 1984 in Los Angeles. In August 1987 at the Pan-Am Games, Canada won 3 medals: a silver in the 10 m tower, a bronze in the springboard and a bronze in tower diving. Canadian divers fared less well at the 1988 Olympics in Seoul, managing only one 9th- and one 10th-place finish, and at the 1992 Olympic Games in Barcelona, with only one 8th-place finish (Mary De Piero in the 3 m springboard). De Piero and Anna Dacyshyn won gold medals in their events at the 1990 COMMONWEALTH GAMES. Annie Pelletier won a bronze medal in women's springboard at the 1996 Olympic Games in Atlanta. At the 2000 Sydney Olympics 3-time Olympian Anne Montminy finally made it to the podium, winning silver in the 10 m synchro diving (with 18-year-old Emilie Hymens) and bronze in the women's 10 m platform. Montminy was Canada's only double medal winner of the Sydney Games.

Alexandre Despatie, a three-time world champion and two-time Olympic medalist, is one of Canada's most-accomplished divers. Despatie won silver in the 3 m springboard diving event at the 2004 Olympic Games in Athens, and in 2008, at the Games in Beijing, Despatie won silver again in the same event. He has also won nine gold and two bronze medals at the Commonwealth Games, including three gold medals at the 2010 Games held in New Delhi. As a result, he is Canada's most-decorated Commonwealth Games athlete.