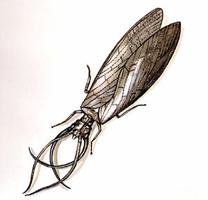 The dobsonfly is a freshwater insect. It has two pairs of wings but is a feeble flier (artwork by Jan Sovak, 1989).

Dobsonflies deposit 2000-3000 dark brown eggs in rows forming large masses on objects near rapidly flowing water. Larvae hatch in 10-14 days, make their way into water and usually settle under stones or other debris. While adults do not feed and are short-lived, larvae are predaceous and take 2-3 years to develop. Fully-grown larvae leave the water to pupate in a cell in soil, moss, under stones, etc. Adults, appearing in early summer, are feeble fliers usually found near water and are short-lived.

Six species occur in Canada: Corydalis cornutus found in southeastern Canada, with a wingspread of about 130 mm, is perhaps the best-known species.

Larvae and adults are food for many fish and bait for anglers, particularly larvae of C. cornutus (sometimes called hellgrammite). 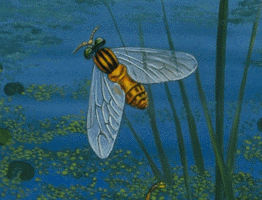