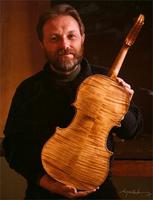 Dominik Zuchowicz in 1972 in the shop of James Croft and Son in Winnipeg (photo by Tony Eston).
PreviousNext

Dominik (James) Zuchowicz. Luthier, born Winnipeg 26 Mar 1949, died Ottawa 8 Feb 2011. Zuchowicz, of Polish heritage, was one of a small group of luthiers who were part of Canada's emerging early music movement that began in the 1960s and grew significantly in the 1970s and later. He apprenticed 1970-4 at the workshop of James Croft and Son in Winnipeg. In 1974, he briefly established a shop at the Winnipeg Folklore Centre, then in 1975 settled in Ottawa, founding the repair shop of the Ottawa Folklore Centre. Zuchowicz made a variety of violas da gamba as well as period and modern violins, violas, cellos, and a few historical keyboard instruments and guitars. He developed particular expertise in making violones (the double bass of the viola da gamba family). In 1975, he sold his first viol to Peggie Sampson for her programme at York University. With assistance from the Canada Council, Zuchowicz researched historical instrument collections in Canada, the USA, and Europe. In the early 1980s, he served as a restoration specialist for collections belonging to the Boston Symphony Orchestra and the New England Conservatory.

His instruments have been owned and played by professional musicians in Apollo's Fire (Cleveland), the Boston Early Music Festival Orchestra, Colonial Williamsburg, La Favoritte (Ottawa), Philharmonia Baroque (San Francisco), the Portland Baroque Orchestra, the Studio de Musique ancienne de Montréal, and Tafelmusik, and are found in collections at the Canadian Museum of Civilization, The Juilliard School, and many universities: Carleton, Johns Hopkins, McGill, Montréal, and Western Ontario among them.

In a 1995 interview Zuchowicz stated, "I find I'm most interested in the reason for a particular instrument; I try to get into the taste of the particular time. Those linkages are always the most interesting aspect, and they're the most informative as to what the right sound and appearance of an instrument might be."

Gambist, cellist, and teacher Barbara Zuchowicz (born Toronto 13 Apr 1948) collaborated professionally with her husband for many years. In 2011 she initiated an online database of Zuchowicz's oeuvre, which is estimated at well over 300 instruments, and a discography of recordings in which they were used.