Eddie Steven Phillip Shack, hockey player, TV personality (born 11 February 1937 in Sudbury, ON; died 25 July 2020 in Toronto, ON). Eddie Shack played left wing with six NHL teams over a 17-year career, and was a popular member of the Toronto Maple Leafs when they won four Stanley Cups in 1962–64 and 1967. A three-time All Star, he played more than 1,000 career games and was widely known for his entertaining style of play. His antics earned him the nickname “The Entertainer,” a persona he drew on in a second career as a TV pitchman. He is an iconic figure in Canadian hockey and the inspiration for the hit song “Clear the Track, Here Comes Shack.”

Eddie Steven Phillip Shack, hockey player, TV personality (born 11 February 1937 in Sudbury, ON; died 25 July 2020 in Toronto, ON). Eddie Shack played left wing with six NHL teams over a 17-year career, and was a popular member of the Toronto Maple Leafs when they won four Stanley Cups in 1962–64 and 1967. A three-time All Star, he played more than 1,000 career games and was widely known for his entertaining style of play. His antics earned him the nickname “The Entertainer,” a persona he drew on in a second career as a TV pitchman. He is an iconic figure in Canadian hockey and the inspiration for the hit song “Clear the Track, Here Comes Shack.” 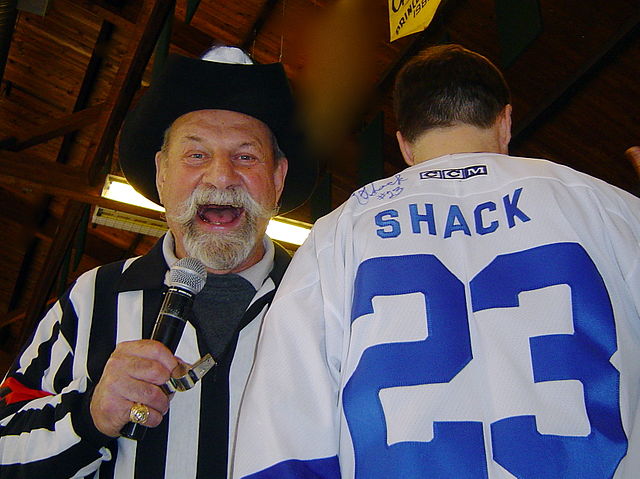 Eddie Shack with one of his fans at an NHL old-timers event in Prince Albert, Saskatchewan, 13 January 2007.

Eddie Shack was the second child of Bill and Lena Shack, a hardworking couple of Ukrainian descent, who also had a daughter, Mary. As a child, Eddie did not do well in school. Illnesses derailed much of his schooling between grade one and three, yet each year he was still passed into the next grade. As a result, he remained illiterate and dropped out of school at a young age. After quitting school, he focussed his substantial energy on his job at a local butcher shop, where he displayed considerable talent as a salesman.

Shack was a young teen working at the butcher shop in Sudbury when he tried out for the Guelph Biltmores of the Ontario Hockey Association (OHA) in 1952. He made the team and eventually became one of its stars; in his fifth year (1956–57) he notched 47 goals and 57 assists in only 52 games — the second highest points total in the league. He was named to the Junior A All-Star team for his efforts.

The young Shack continued to work during his time with the Biltmores. Soon after arriving in Guelph, he found a job at a meat market and another on a coal truck. The physical labour helped to keep him exceptionally strong for his age.

Early Struggles with the Rangers

In 1957, Shack reported to training camp with the New York Rangers, the parent club of the Guelph Biltmores. He immediately clashed with Rangers head coach Phil Watson and was shipped off to the AHL affiliate, Providence Reds, where his season was cut short with a broken leg. The next season he made the Rangers, where he would play for most of the next two and a half seasons.

Shack disliked his time in New York. Although he had been a prolific scorer in junior hockey, with the Rangers he was expected to play a role as a checker. As a result, he only scored 16 goals in three seasons with the Rangers. In 1959, he was demoted to the Springfield Indians of the AHL; a move that Shack believed resulted from his criticism of the coach during a team meeting in Montréal.

In February 1960, Shack was traded to the Detroit Red Wings as part of a deal for Red Kelly. However, the trade was annulled when Kelly refused to report to the Rangers. A second attempt to trade Shack was more successful. In November 1960, he was traded to the Toronto Maple Leafs, where his struggling career took a turn for the better.

Shack not only played hard, but also managed to liven things up for the fans. Canadian hockey writer Stephen Cole compared him to “a big puppy let loose in a wild field.” A powerful skater with a cannon of a shot, Shack was all over the ice, often playing both wings on the same shift. If anyone happened to get in his way — whether opponent or teammate — he would skate right through them. One of his most notable victims was Gordie Howe, who found himself in the hospital with a concussion and stitches after a collision with Shack in 1961.

Shack was also a willing combatant. In the 1964 playoffs, he ended up in a fight with Henri Richard. After landing several good punches early in the fight, Shack found his arms pinned and head-butted Richard, sending him out of the game for stitches. Later in the game, Shack continued the chaos by injuring Jean Béliveau with a hit into the boards. Toronto would win the game — and the series — en route to the Stanley Cup.

Sometimes reckless and always exuberant, Shack left mayhem in his wake wherever he played. This led to a lot of penalty minutes, which his fans loved. While he played the game with an almost boyish enthusiasm, Shack was also serious about winning, and was known to fire up his teammates in the dressing room between periods. He could also be a comedian if he felt the team needed to loosen up. Much to the chagrin of his coaches, he would often have a cheeky retort when reprimanded, which could be hilarious for his teammates.

Shack won four Stanley Cups with the Maple Leafs in 1962, 1963, 1964 and 1967. Even though he spent a lot of time on the bench as the 10th forward, he did manage to score some goals. Most famously, he scored the Stanley Cup-winning goal in 1963, a goal that he claimed he unintentionally deflected into the net with his backside. During his time in blue and white, he also played in three All Star Games from 1962 to 1964.

The 1964–65 season was the worst of Shack’s NHL career, with only 5 goals and 9 assists in 67 games. At the start of the 1965–66 season he was temporarily demoted to the AHL, where he played for the Rochester Americans and proved to be an instant boon to attendance. Upon his return to the Maple Leafs, he impressed with his best NHL season yet, scoring 26 goals. 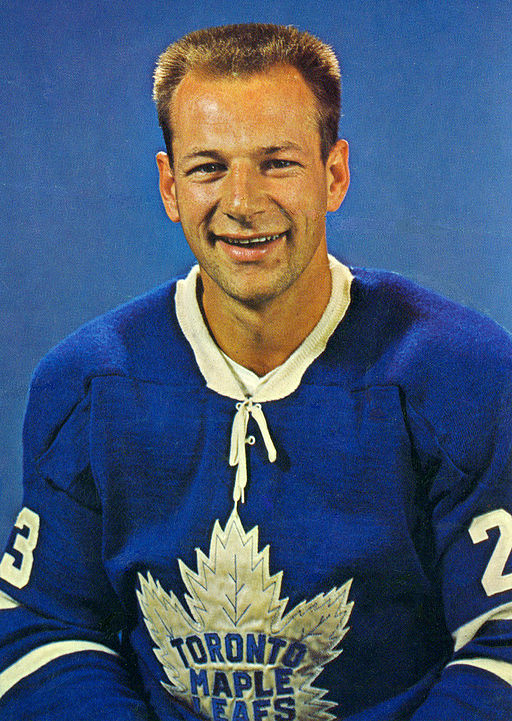 Shack was traded to the Boston Bruins on 15 May 1967. The move gave him a chance to finally play as a regular instead of the 10th forward on the bench. By now a seasoned veteran with four Stanley Cups to his name, he scored 23 goals in his first season with the team and was an energetic force both on the ice and in the dressing room.

It was while playing for Boston that Shack had his famous stick fight with Larry Zeidel of the Philadelphia Flyers on 7 March 1968. For several minutes the two struck each other with their sticks, while the referees were helpless to intervene. For his part in the altercation, Shack was suspended for three games and fined $300.

Shack’s penchant for taking bad penalties, a consequence of his natural exuberance, eventually led to another disagreement with management; and Boston decided they didn’t need an entertainer anymore. On 14 May 1969 Shack was traded again, this time to the Los Angeles Kings. He scored 22 goals and 12 assists in his first season with his new team. The next season he rarely played, and on 24 November 1970 he was traded to the Buffalo Sabres. Following the trade, he scored 25 goals for his new team, giving him a career-high 27 goals and 46 points for the 1970–71 season. On top of his scoring, Shack’s reputation and unique skill set helped fill seats for the Sabres in their first NHL season.

The Pittsburgh Penguins, another expansion team, acquired Shack on 4 March 1972 in a trade with the Sabres. The trade paid immediate dividends for the Penguins, as Shack helped fire up the team and led them into the playoffs with his rambunctious play and 25 goals. This was the fifth time that Shack scored at least 20 goals with a different team.

On 3 July 1973, Shack was traded to the Maple Leafs and returned to Toronto, where he played two more seasons before retiring from the NHL in 1975. During his 17 years in the NHL, Eddie Shack amassed 239 goals, 226 assists and 1,437 penalty minutes in 1,047 regular season games, and an additional 6 goals, 7 assists and 151 penalty minutes in 74 playoff games.

Following his retirement from the NHL, Shack was involved in charity hockey games and old-time player tours throughout the country.

In 1966, while Shack was playing for the Toronto Maple Leafs, Brian McFarlane wrote the song, “Clear the Track, Here Comes Shack”:

Clear the track, here comes Shack,
He knocks them down and he gives them a whack.

Sung by The Secrets, the song was number one on Toronto’s CHUM-AM 1050 radio station’s charts for two weeks, and remained on the chart for over two months.

Life Outside of Hockey

In 1972, Shack became co-owner of the Vaughan Valley Golf Club with three partners: ex-NHLer Dave Creighton; and lawyers Bob Watson and Gerry Ublanski. Shack was actively involved in the day-to-day operations of the course and wasn’t afraid to get his hands dirty. On one occasion, he dug through the trash to find some missing silverware that had been thrown out with the garbage by club employees. He also personally redesigned several of the holes so that more golfers could play in a day.

Like his one-time Leafs teammate Tim Horton, Shack also lent his name to his own chain of donut shops. The Eddie Shack Donuts chain opened its doors in 1994.

As a recognizable and colourful figure, Shack starred in many television ad campaigns following his retirement, acting as a spokesman for companies such as Esso, Journey’s End Hotels and, perhaps most famously, the Pop Shoppe. In 1976 he began appearing on billboards and in radio spots, and represented the soda company at events.

Shack remained in demand as a motivational speaker into his later years; he showed the same flair for entertainment that he showed on the ice. He used his fame to advocate for literacy in schools, trying to motivate children to study so they won’t face the same struggles that he did. A biography, Clear the Track: The Eddie Shack Story, was written by Ross Brewitt and published by Stoddart in 1998.

Eddie Shack married his wife, Norma, in 1962, while he was playing for the Maple Leafs. The couple had two children: a daughter, Cathy, and a son, Jimmy.