Edmontosaurus is one of the largest hadrosaurs (or duckbilled dinosaurs) known. Adults were in excess of 13 m long and weighed 7.5 tonnes. It had powerful hindlimbs, shorter forelimbs, a long muscular tail, and a large head perched at the end of a short neck. Its feet had three toes and its hands four fingers. Three of these fingers were wrapped together in a fleshy “mitten.” The last finger (the pinky) was isolated and capable of grasping like a thumb. This “mitten” strengthened the hand to support the weight of the animal when it walked on four legs, although Edmontosaurus could rear up on two legs to feed on trees.

Edmontosaurus belongs to the subfamily Hadrosaurinae (or Saurolophinae). The Hadrosaurinae were a group of hadrosaurs that lacked the large, hollow, bony crest characteristic of the other hadrosaur subfamily, the Lambeosaurinae. Instead, hadrosaurines had a pronounced nasal arch, like a “Roman nose.” Paleontologists also believe hadrosaurines, including Edmontosaurus, may have had inflatable air sacs on their snouts, somewhat like the inflatable noses of male elephant seals today. These hypothetical, soft-tissue structures could have been used to attract mates or amplify calls. In addition, one specimen of Edmontosaurus preserves the fossilized impression of a lobe-shaped, fleshy crest on top of its head.

Like all hadrosaurs, Edmontosaurus had a duck-like, bony snout covered by a beak. Inside their mouths were hundreds of closely-packed teeth. When the upper teeth came in contact with the lower teeth, both wore down to form a tooth pavement. Different parts of this “pavement” were harder than others, making it ideal for grinding plant matter.

Several specimens of Edmontosaurus include vast expanses of fossilized skin. These “mummies” demonstrate that Edmontosaurus was covered with scales. Raised clusters of large (< 5 mm), pentagonal scales were scattered in a background of small (1-3 mm), round scales. The colour of the skin is unknown. 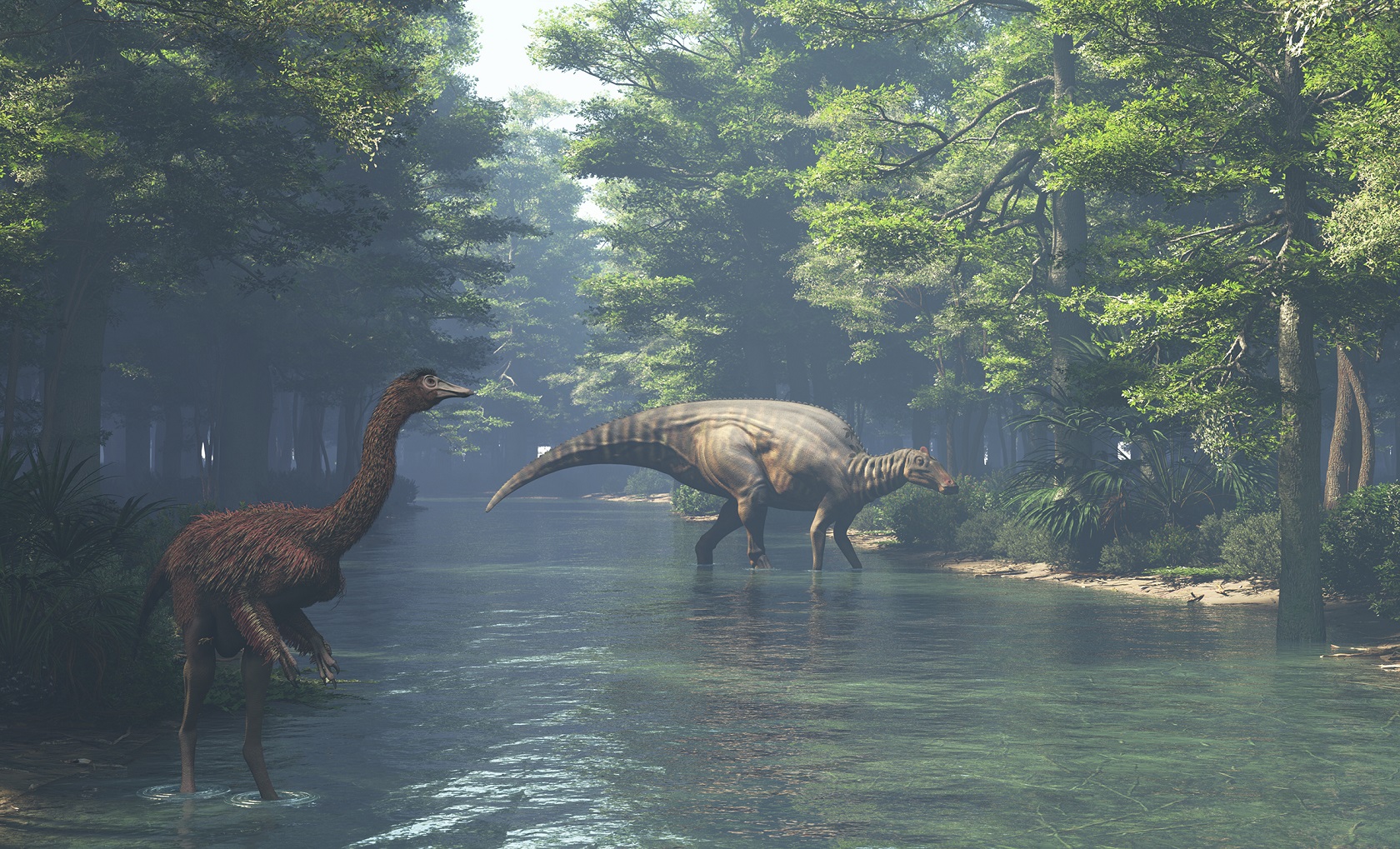 Paleontologists recognize two species of Edmontosaurus: E. regalis and E. annectens. Fossil remains attributable to Edmontosaurusregalis are found in the lower part of the Horseshoe Canyon Formation of southcentral Alberta, the Wapiti Formation of northwestern Alberta, and possibly the St. Mary River Formation of southern Alberta. The fossils date to between 73.1 and 71.5 million years ago. In contrast, fossil remains attributable to Edmontosaurusannectens are found in the Hell Creek Formation of Montana, North Dakota, and South Dakota, the Lance Formation of Wyoming, and the Frenchman Formation of Saskatchewan. These fossils date to between 68 and 66 million years ago. In addition, rare hadrosaur remains found in the Scollard and Willow Creek formations of Alberta could belong to E. annectens, but are too incomplete to confirm their taxonomic identity.

Edmontosaurus lived in wetlands and seasonally waterlogged forested environments. These environments were located on the western coastal plain of the Western Interior Seaway, an inland sea that connected the modern-day Arctic Ocean to the Gulf of Mexico, dividing North America in two.

Edmontosaurus lived in herds of tens to hundreds of individuals.

Even though paleontologists have not identified Edmontosaurus eggs, it is presumed to have laid clutches similar to the closely-related hadrosaurine Maiasaurapeeblesorum. The clutches consisted of 16 spherical eggs, about 9 cm in diameter, although the eggs of Edmontosaurus may have been slightly larger.

Paleontologists have discovered rare remains of hatchling and juvenile Edmontosaurus individuals. Edmontosaurus babies are estimated to have weighed between 1 and 4 kg upon hatching and measured approximately 1 m in length. Its forelimb and hindlimb bones grew at a constant rate, indicating its gait did not change during its lifespan — Edmontosaurus primarily walked on all fours throughout its life.

Did you know?
Edmontosaurus babies weighed about the same as a human baby, despite being roughly twice as long. This is because Edmontosaurus, like most dinosaurs, had very long, very light, tails. For example, a metre-long baby hadrosaur, less its tail, might measure between 40 to 50 cm, a size comparable to that of a newborn human.

Edmontosaurus was herbivorous. Its beak allowed it to crop food from plants and trees. Hadrosaurs could not chew by moving their lower jaws from side-to-side like mammals. Instead, the lower jaw bone rotated inward, allowing the upper teeth to grind against the lower teeth to pulverize plant matter. Stomach contents preserved in Edmontosaurus mummies and the chemical composition of their teeth suggest these animals may have fed heavily on evergreen trees.

Edmontosaurus, like most hadrosaurs, was a gregarious animal. There are numerous bonebeds preserving hundreds to thousands of bones belonging to individuals ranging in size from late juveniles to adults. These bonebeds indicate Edmontosaurus lived in herds of tens to hundreds of individuals. The bones of very young Edmontosaurus are not usually found in bonebeds. However, fossil trackways preserving the footprints of both small and large individuals suggest the young may have travelled with the herd. Although fastest running speed cannot be determined from trackways, computer modeling suggests that a subadult Edmontosaurus could have galloped at a speed of up to 57 km/h.

The first specimen to be called Edmontosaurus was discovered in 1912 in the Drumheller area of Alberta. The skeleton was put on display in the Hall of Fossil Vertebrates of the Geological Survey of Canada in Ottawa in 1913. It was the first mounted dinosaur skeleton ever put on display in Canada. However, it wasn’t until 1917 that it was officially named Edmontosaurus regalis, after the rock unit in which it was discovered, the lower Edmonton Formation (now called the Horseshoe Canyon Formation). 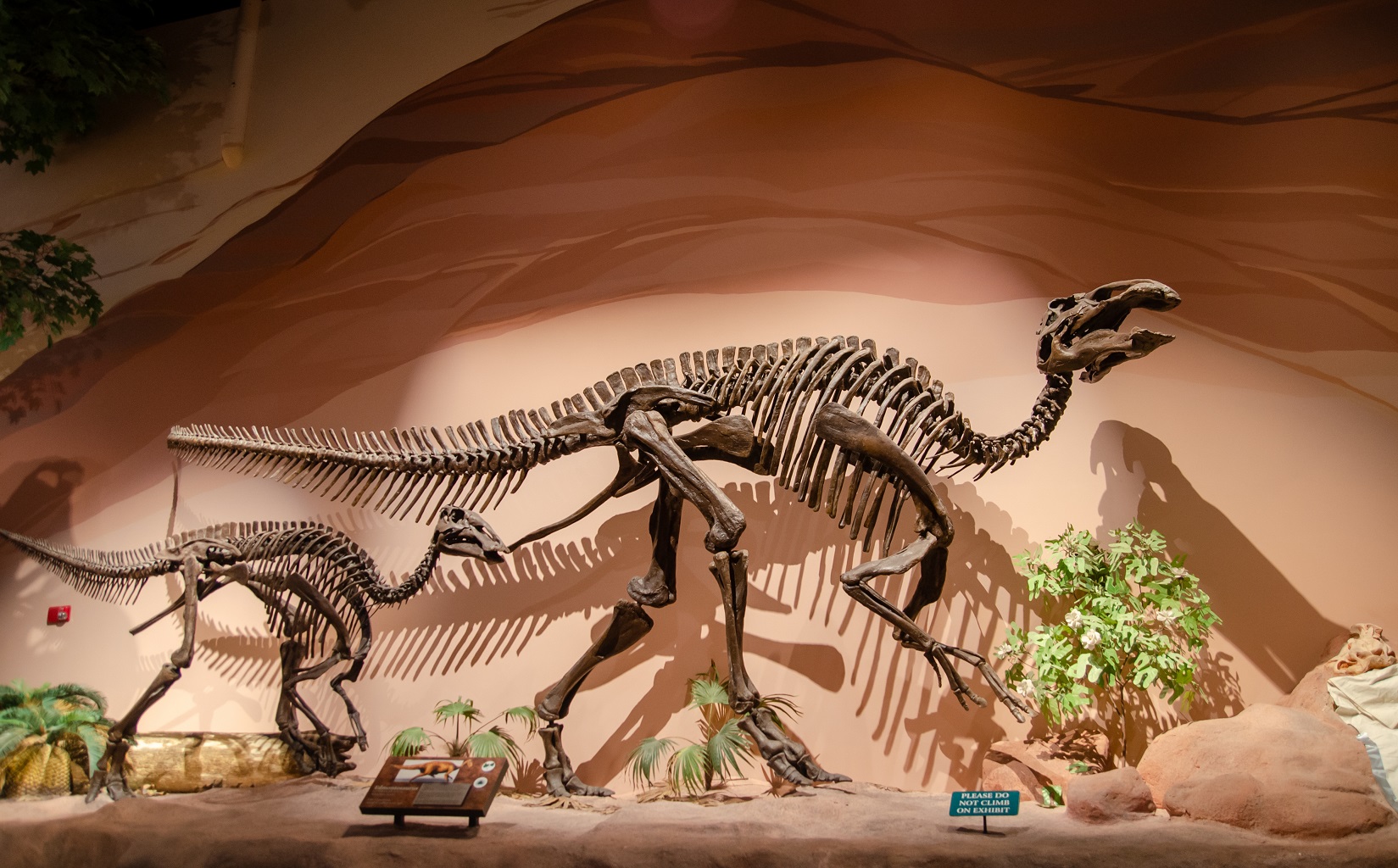 An Edmontosaurus skeleton on display at the Museum of Ancient Life in Lehi, Utah.