Evangelical Christian Church, often called the Christian Church (Christian Disciples), is a denomination stemming from the early 19th century Restoration Movement led by Barton Warren Stone and Walter Scott of Kentucky, Thomas and Alexander Campbell of Virginia, and once in Canada, Baptists in Nova Scotia.

The Evangelical Christian Church, founded in 1804 in the US, joined with the Disciples of Christ in 1832, and the first Canadian Evangelical Christian Church was formed in 1810 near Charlottetown, PEI. In 1832, the Stone-Campbell movement united the Kentucky and Virginia leaders and their congregations. The leaders sought to reform the church along non-sectarian, non-creedal lines, embracing Stone's motto of "Let the unity of Christians be our polar star." The name of the newly united groups incorporated "disciples" and "Christians" and became known as the Evangelical Christian Church (Christian Disciples). Scholars combined rationalism in biblical studies with the philosophy developed during the second Great Awakening, an evangelical religious revival movement (1790-1840). From its earliest beginnings in Canada, many autonomous congregations emerged as members who embraced the simple lines of the organization.

In the latter part of the twentieth century a Plan of Union was developed in partnership with the United Church of Canada but was rejected in a close vote by assembly delegates in 1976. The restructuring of congregations during the 1960s and early 1970s culminated in the publication of the constitutional document, Design (1978). Since then, the church has been governed by the decisions of delegates at biennial General Assemblies and resolutions are implemented by each congregation and other church units. Within the North American ECC, the Region of Canada, which had 30 churches and some 3500 members in the mid-1990s (down from 38 churches in the 1980s), is unique in that it functions as a national church and has full denominational status at national and international levels.

Today, the ECC offers the Eucharist to all Christians and baptism by immersion for new Christians. The prior baptism of persons transferring from other denominations is recognized and accepted, a practice known as "open membership." Ordination of women and men to the ministry normally follows graduation from theological study in an accredited seminary, with credentials granted by the national church on behalf of the whole church. Congregations are involved in cultural and charitable activities in their communities and in world development and local and international mission projects.

Disciples hold non-sectarian views, working to unite all Christians under the restored authority of the New Testament. They are actively involved in social issues and cultural life, nationally and internationally. This participation, like the Disciples' sacramental life, which consists of believers' immersion baptism and weekly celebration of the Lord's Supper, is a response of obedience to the teachings, life and ministry, death and resurrection of Jesus. The Disciples distinguish between clergy and laypersons on functional rather than sacramental grounds. Congregations are led by elders and deacons who are neither ordained nor appointed for life. Lay elders, many of them women, often take charge of a Lord's Supper celebration. Regions ordain clergy to the ministry of the whole church and clergy are granted credentials by the regions. 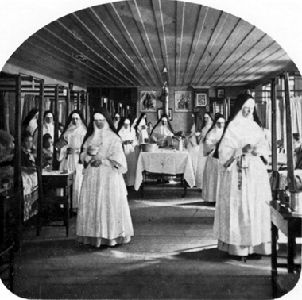