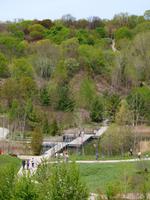 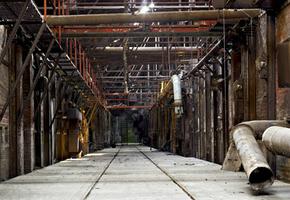 In 2010, Evergreen Brick Works opened as an innovative public space and a year-round community environmental centre that inspires and equips visitors to live, work, and play more sustainably. It is home to a number of events and groups that are working to build a more sustainable future for TORONTO and for cities across Canada.

Located in Toronto's Don Valley, Evergreen Brick Works helps to reconnect Torontonians with the rich natural heritage and invaluable recreational opportunities in the Don Valley Watershed. Evergreen Brick Works is part of a growing effort to preserve important green spaces in urban environments, such as Toronto's ravines, and maintain a "green infrastructure" that sustains the health of urban environments and the people that live within them.

The site's revitalization involved many partners but was spearheaded by Evergreen, a national charity that empowers Canadians to make cities more livable throughout the country. Founded in 1991, Evergreen grew out of a deep connection with the Don Watershed, and some of its earliest projects involved tree plantings and other re-naturalization projects in the Lower Don River. Evergreen was involved in the creation of the Weston Family Quarry Garden (the quarry from the old Don Valley Brick Works), and in 2002 began developing the plans for the innovative site that would become the Evergreen Brick Works. In 2006, Evergreen began hosting a Farmers' Market on site (now the largest in Toronto) and in 2008 construction began on the new community environmental centre.

The origins of the site that became the Evergreen Brick Works lie as far back as the spring of 1882 when a young farmer named William Taylor was building a fence on his property in the Don Valley. While digging the postholes, he discovered clay that would turn out to be perfect for making the red bricks favoured by builders at the time. In fact the site sits on a floodplain at the confluence of Mud Creek and the Don River. Thousands of years ago this was the mouth of a glacial river, which explains the presence of so much clay.

In 1889, Taylor and his two brothers opened the Don Valley Brick Works, which would remain active until 1984. The bricks were of such good quality that, in 1893, the DVBW won the highest award at the World's Columbian Exposition in Chicago. The brothers were also able to dig a quarry on the site that revealed an abundant source of shale. Four chimneys were built each of which carried one word of the name spelled out in white bricks: "Don", "Valley," "Brick," and "Works."

After the great fire in 1904 destroyed much of the downtown core of the City, a law was passed prohibiting the use of wood as a primary material for new buildings, and the fortunes of the Don Valley Brick Works were secured. At the peak of its activity the Brick Works produced over 43 million bricks a year, and provided the materials used to build many of Toronto's most important buildings - including MASSEY HALL, Old City Hall and HART HOUSE at the U of T - as well as many of its residential neighbourhoods.

After the Brick Works closed in the early 1980s, the site was expropriated by the City of Toronto and the Toronto and Region Conservation Authority (TRCA) and designated an Area of Natural and Scientific Interest by the Province of Ontario. In 2002, the 16 buildings making up the industrial site of the former Don Valley Brick Works were designated as Heritage Buildings. Today, the site showcases these buildings along with an adjacent 16-hectare public park in the former quarry, known as the Weston Family Quarry Garden. In the early 2000s the remaining industrial buildings at the Brick Works, which had sat unused since their closing in 1984, were taken over by Evergreen and transformed into a centre for educational programs that help foster stronger connections between people and nature, as well as a living demonstration of sustainable URBAN DESIGN.

The former quarry at the Don Valley Brick Works contains areas of great importance to the understanding of the geological history of Ontario.

The walls of the quarry contain geological evidence of cyclical changes in climate in the region going back millions of years, including two ice ages and the conditions that formed the ravines that give Toronto its characteristic geography. The north wall of the former quarry is world-famous as one of a very few sites where the geological record is so clearly displayed.

The layers of rock depicted on site show evidence of several significant geological eras. The uppermost layer contains yellow-coloured beach sands, called the Iroquois Sands, deposited 12 000 years ago. The sands are named after Lake Iroquois, a larger precursor to Lake Ontario that drained after the last ice age, carving out Toronto's distinctive ravines and leaving behind the sands and FOSSILS of bear-sized giant BEAVERS that once lived in the area.

Below that are the Sunnybrook Drift, made up of grey-coloured mud and glacial stones, evidence of a time between 13 000 and 50 000 years ago when Southern Ontario was covered by a thick sheet of ice, and the Scarborough Drift, created by a large river that once drained into an ancestral LAKE ONTARIO at least 45 metres deeper than the current lake and stretching nearly to Montreal.

Beneath those layers lies the Don Formation, which contains fossil evidence of plants and animals that lived in the region around 130 000 years ago when the climate of southern Ontario was much like it is today. This layer also shows, through the record of fossilized species contained in it, the transition from this temperate climate to a colder, boreal climate at the onset of the last ice age.

Finally, the Georgian Bay Formation is shale bedrock containing rocks dating back 440 million years, and fossilized mollusks, gastropods, TRILOBITES and crinoids ("sea lilies"), from an ancient seabed. These rocks were formed when continental drift was creating the super-continent Pangaea, before breaking apart to form the continents we know today.

The geological heritage at the Brick Works has been studied by scholars from all over the world and has made important contributions to our understanding of the historical patterns of climate change. In 1926, the famous geologist A.P. Coleman, then teaching geology at the U of T, published Ice Ages Recent and Ancient, an influential book that used evidence from his study of the Brick Works quarry to show that the Earth had experienced multiple ice ages over its history. The site continues to be of great significance to geologists.

A clay and shale quarry for 100 years, this 16.5-hectare area has been transformed into a thriving green space managed by Toronto Parks, Forestry and Recreation.

The creation of the Weston Family Quarry Garden marked the beginning of the transition that made the site what it is today. Opened in 1996, the park today includes wetlands, hiking trails and wildflower meadows, and is home to many species of animals including birds, turtles, frogs and small mammals.

Evergreen Brick Works is located in the Don Valley floodplain. Mud Creek, a tributary of the Lower Don River, runs through the site, and four ponds filter stormwater and provide habitat in Weston Family Quarry Garden.

Covering 360 square kilometres, the Don River watershed is home to over 800 000 people - Canada's most urban watershed - a main part of Toronto's unique ravine network. "The ravines are to Toronto what canals are to Venice and hills are to San Francisco," wrote Robert Fulford in his book Accidental City. "They are the heart of the city's emotional geography, and understanding Toronto requires an understanding of the ravines."

Citizen groups and government agencies have been working to "bring back the Don" since the late 1980s, and the City of Toronto, the TRCA and Evergreen will continue to work together to preserve the unique ecological, industrial and geological heritage of the site and its natural surroundings.