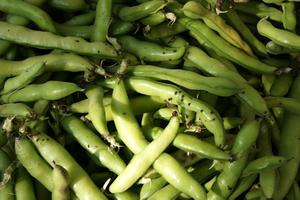 The faba Bean, or broad bean (Vicia faba or Faba vulgaris), is a legume family member, which is not a true bean but a vetch. It originated in Eurasia, and archaeological evidence indicates that it was known to various ancient Western civilizations. The faba bean has a high protein content (25%) and has played a key role in human nutrition, being used in the green, immature state (as a shelled green vegetable) or dried and stored for future use. A cool-season plant, the faba bean does not thrive where summers are hot and dry. Black aphids constitute its principal pest. Plant height varies among the half dozen or so cultivars (commercial varieties), from 59-118 cm. Leaves are pinnately compound (ie, featherlike) and turn blackish with age. Flowers are white with wings marked by a large black spot.

The main cultivar is the Broad Windsor, of English origin. Selections have been made resulting in varying plant size and heat resistance. Seeded in spring (mid-May), the bean matures in 65-85 days, depending on location and cultivar. Broad beans for home consumption may be produced in most garden areas across Canada. Commercial production in Canada began in 1972; by 1980, 23 000 ha were cultivated, but hectarage decreased substantially in 1987 to 10 900 as a result of limitations in the export market. Faba beans are grown as a silage crop and as a vegetable; there is increasing interest in smaller-seeded types for use as a source of vegetable oil. Crop research is concentrated at Morden, Manitoba, and Lethbridge, Alberta.