This article was originally published in Maclean's Magazine on March 11, 1996

FashionTelevision (FT for short) is a rare Canadian TV success story.This article was originally published in Maclean's Magazine on March 11, 1996 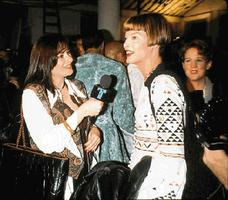 Fan-waving German couturier Karl Lagerfeld is practically a household name. Supermodels Naomi Campbell and Kathy Ireland appear in potato-chip commercials. Bus drivers and construction workers (well, some of them, anyway) can pronounce Italian designer Gianni Versace's last name. Fashion - for so long the domain of European debutantes and American wanna-bes - has never been so widely in fashion. And one of the reasons for that shift from fashion house to household is a TV show made by a skeleton crew in Toronto - hardly the world's haute couture capital. "It used to be that fashion was for those fashionistas, people who really did care about hem lengths and what they said about society," says Jeanne Beker, host of FashionTelevision, the hip, sexy fashion news show that is celebrating its 10th anniversary this year. "I think we've helped make people understand that fashion is something we can all take part in."

FashionTelevision (FT for short) is a rare Canadian TV success story. Produced at local Toronto TV station City TV, FT is now available in syndication not only across Canada, but also in the United States (where it has been on the VH-1 cable channel since 1993), Vietnam, Hong Kong, Germany, France, Iceland, Bulgaria, Singapore, Yemen, Saudi Arabia - the list goes on. In all, the show has a potential audience of more than 100 million in 120 countries.

Back in 1985, the notion of devoting a half-hour show to fashion was a novel one, but one that series co-creator Jay Levine, then a 28-year-old producer in City TV's on-air promotions department, saw was ripe for television. Part of the idea, says Levine, now FT's producer, came from Vogue magazine - "very sexy. It had a stimulating visual effect." Television, Levine reasoned, could take the imagery of fashion and give it action and emotion, complete with a rock 'n' roll sound track. "Add it up," says Levine, "and it's entertaining." Enter Beker, who was then co-hosting a rock magazine show, The NewMusic. "I was keen to sort of move beyond the rock 'n' roll thing," says Beker. At first, she met resistance from supervising producer Marcia Martin, who wanted a model - or at least a woman who looked like one - to host the show. "I said, 'Whatever you're doing, I want to do it,' " recalls the effervescent Beker, 43. " 'Please, please, please, please let me.' " Martin did. And FT, which premiered in September, 1986, became an instant hit.

The basic format has not changed much in 10 years. At the centre is Beker, constantly grinning, wryly asking impertinent questions and hobnobbing with fashion's most stuffed shirts, all the while maintaining an ironic distance from her flamboyant subjects. "I still don't describe myself as a fashion person - a lot of people in the fashion world get pissed off at me for saying that," says Beker, who travels at least twice a month to Europe or New York City to cover shows. "But we're able to sit on the fence and not get caught up in the hype." Although its bread and butter is clips from the major fashion shows, FT avoids critiques of the clothes. And the program goes beyond bell bottoms and bustiers, featuring magazine-style pieces on art and architecture. "We like to be smart every once in a while, too," says Levine.

Still, no one could accuse FT of being highbrow. And its street-level view distinguishes it from a host of competitors attempting to capitalize on the fashion TV phenomenon. CNN has Style, hosted by the aloof Elsa Klensch; MTV has the ultra-hip House of Style with Cindy Crawford; CBC Newsworld offers the esoteric musings of Toronto Life Fashion contributing editor Tim Blanks in Fashion File. And FT itself has spawned a younger sister, the half-hour City TV-produced Oo La La, which focuses on style for a younger audience.

FT clearly outdoes the competition in one department - nudity - by frequently showing nipple-baring models on prime-time TV. Levine says the nudity merely reflects what is happening on the runways in Paris, Milan and elsewhere. "But yeah, it's made a better show," he acknowledges. "It's part of the sexual nature of the industry." Beker, a mother of two and wife of Toronto radio personality Denny O'Neil, says that she occasionally has qualms about FT's flirtation with flesh. "I mean, I've had to defend it to my mother," she says. "I go, 'Ma, it's fashion, it's art' - you know, with a small 'a.' " The eye candy, as Beker calls its, has certainly broadened the appeal of a program on women's fashion: in fact, between 30 and 40 per cent of its 250,000 viewers in the Toronto area are men. There is even a story - no doubt apocryphal - that FT is the most popular program in Canada's prisons. "Yeah, I've heard that," says Levine. "I'm sure if you were in prison and there were a lot of sexy girls on TV, you'd watch that show - especially if it's up against 60 Minutes."

But if it sometimes pushes the limits of discretion - VH-1 in the United States edits the show for nudity - FT's mix of sex and style is clearly a formula that works. And despite its success, the show has avoided getting too big for its britches. It still operates on a shoestring, with only six full-time staff producing 39 half-hour shows each season on a budget of less than $100,000 per episode. But a small budget has not prevented FT and Beker from becoming major players in the international fashion media. This month, the loquacious host will be billed as "FashionTelevision's Jeanne Beker" as she begins a twice-weekly fashion commentary segment on NBC's Real Life, a new morning magazine program. After 10 years covering the trends and foibles of the image industry, Beker and FashionTelevision have proven themselves to be more than a fad.