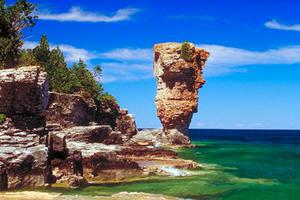 Fathom Five park is located off the northern tip of the Bruce Peninsula and is a continuation of the geological formation, the Niagara Escarpment. Changing water levels have carved tall stone pillars, called "flowerpots," from the dolomite cliffs. The park's 20 islands support populations of rare ferns and orchids. Cedars, part of the oldest forest in eastern North America, grow out of the islands' cliffs. Fathom Five, along with nearby Bruce Peninsula National Park, protects core areas of the Niagara Escarpment Biosphere Reserve.

People of our First Nations followed migrating caribou some 8000 years ago along rocky shores that now lie 30 m below the surface of the waters of the park. Within its boundaries, Parks Canada protects the remains of 22 historic shipwrecks. Sail and steam, they represent the technology of another time.

Clear, clean water and many shipwrecks make Fathom Five National Marine Park very popular with scuba divers and snorkelers. Visitors wishing to dive within its boundaries must register at the visitor centre in the town of Tobermory. From this scenic fishing village, glass-bottom tour boats make regular excursions into Fathom Five, visiting shipwrecks and Flowerpot Island, where visitors may camp or hike the trails.