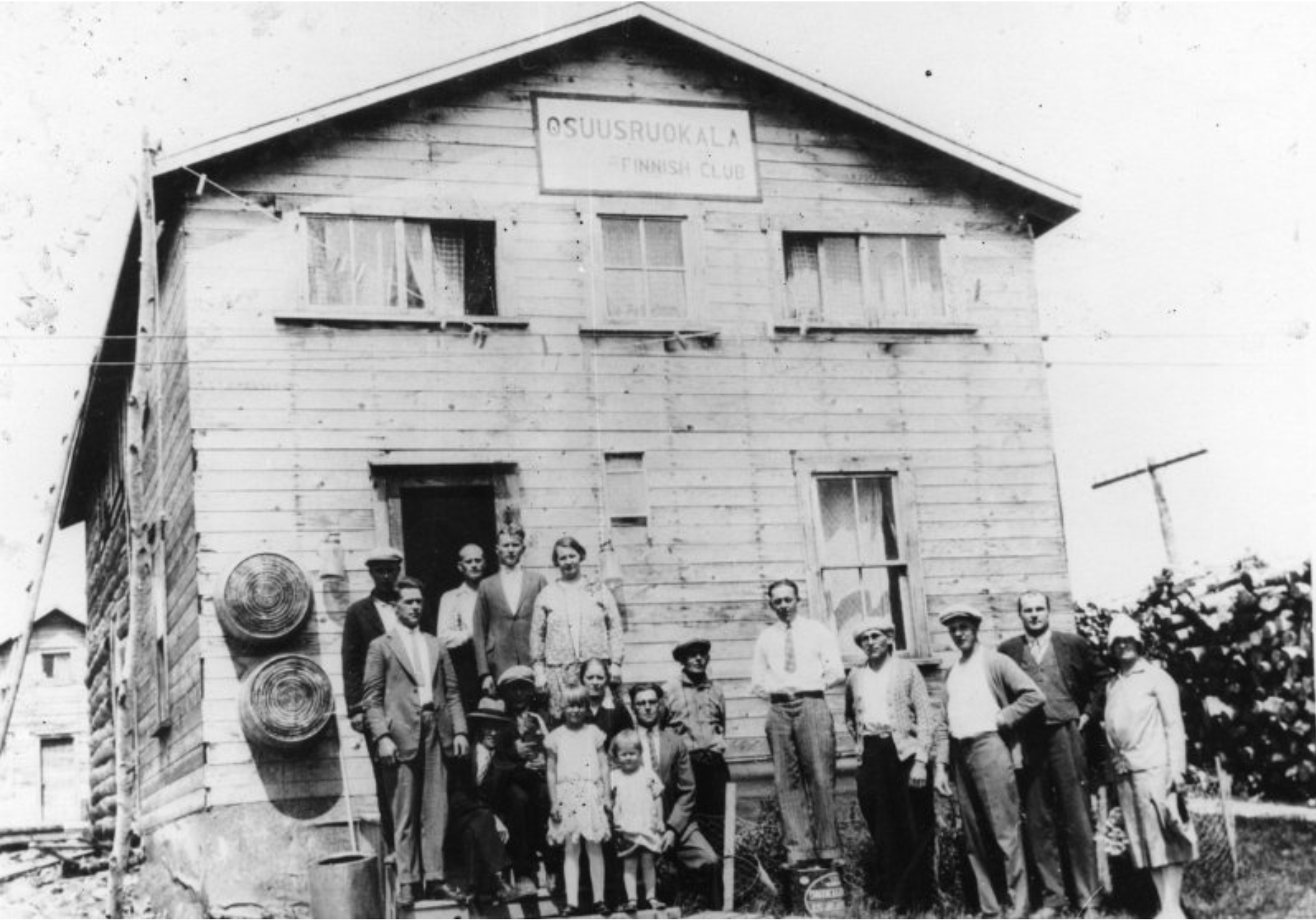 Finland was part of Sweden until 1808, when it was ceded to the Russian Empire. In December 1917 the Finnish Parliament declared its independence from Russia. This was followed by a bitter civil war in 1918, in which the conservative White Guard defeated the Red Guard workers. Finns had been immigrating to North America in large numbers prior to the First World War (WWI) and continued to do so in the first decade of Finnish independence, primarily for economic reasons. A large population explosion in rural areas coincided with a lack of available farmland, forcing many rural inhabitants to look elsewhere. The overseas migration was mainly from the provinces of Vaasa, Oulu and Turku-Pori in southeastern Finland, and later from Helsinki. Other factors encouraging immigration included religious freedom and a desire to escape compulsory military service in the Russian army.

The first Finnish immigrants to arrive in North America were part of a group of settlers who established the colony of New Sweden along the banks of the Delaware River between 1641 and 1655. They were soon assimilated into the American mainstream. Until 1914, most Finnish emigrants went to the US, although a substantial minority came directly to Canada. Others came to Canada via the US during periods when the Canadian economy was attractive. When the US established entry quotas in the 1920s, Canada became the main destination of emigrants from Finland. Landless groups with no economic prospects in their homeland made up the largest proportion of overseas emigrants.

Finns again immigrated to Canada in large numbers (20 000) between 1950 and 1960. They were seeking better economic opportunities than were available in postwar Finland. These Finns were generally from urban areas, were better skilled and educated, and were more willing to settle in the urban areas of Canada than pre-1930 Finnish immigrants. Since 1960, with the expansion of the Finnish economy, few Finns have immigrated to Canada.

Ontario and British Columbia have traditionally attracted the largest numbers of Finnish immigrants. In Ontario, Finns settled as pioneers in Thunder Bay, Sault Ste Marie, Sudbury, Kirkland Lake and Timmins. Before WWI some Finns settled in Toronto but their population there increased after the Second World War (WWII). Small Finnish communities were also established in Windsor, Hamilton and St. Catharines, Ont, in the 1950s. There has been an active Finnish community in Montreal, Quebec since the 1920s, but few settled elsewhere in the province. Some small rural Finnish communities were established in Alberta and Saskatchewan.

Many of the first Finnish settlers worked on the construction of the Canadian Pacific Railway (CPR). Later, jobs were found in mining and lumbering. Many of these early Finnish immigrants worked in industry and then settled on small farms outside these urban centres. This was particularly the pattern in northern Ontario. Many single women arrived to work in domestic service. It was not until after WWII that children of Finnish farmers left the farms for jobs in industry. Finnish immigrants arriving in Canada in the 1950s settled immediately in the urban centres, where some established businesses and moved into other forms of professional work.

Finns established temperance societies, sports clubs, churches, and clubs for dances, drama, choirs, bands, and folk dancing to meet their community and cultural needs. Many Finns of the pre-1930 period were of working age and spoke only Finnish; consequently, there was a very real need for these social activities and a close bond linked the members. The Finnish Organization of Canada (FOC), established 1911 (originally the Finnish Socialist Organization of Canada), is the oldest Canadian nationwide cultural organization for Finns. The pro-labour activism of some of its leaders in the 1920s and 1930s occasionally brought it into confrontation with the Canadian authorities and caused some dissension within the Finnish community itself.

In 1940, several Lutheran churches and non-FOC clubs organized the first of the Finnish Grand Festivals that was held to raise funds for Finland during WWII. These festivals, featuring track and field, gymnastics, folk dancing, choirs, drama, and a wide range of social activities, have continued as an annual summer event. The Finnish Canadian Cultural Federation (with some 40 member groups) was founded in 1971 to undertake the activities of the Grand Festival and to serve as a nationwide organization to promote Finnish culture in Canada.

Most of the Finns in Canada are Lutherans, although only a minority participate actively in the Lutheran churches. Finnish Lutheran congregations have been established in Montreal, Toronto, Timmins, Sudbury, Sault Ste Marie, Thunder Bay and Vancouver. Some Finns support the United Church, others the Finnish Pentecostal Church, which has a number of active Finnish-language congregations, primarily in Ontario (see Pentecostal Movement in Canada). Several significant Finnish-language newspapers were founded in Canada including the independent Vapaa Sana (1931), published in Toronto, the leftist Vapaus, published in Sudbury from 1917 to 1975 and the independent Canadan Uutiset, published in Thunder Bay since 1915 (see Newspapers in Canada). However, since few Finnish immigrants have arrived in Canada since 1960, the readership of the Finnish-language press in Canada will probably decline.

The children of Finnish immigrants adapted readily to the Canadian educational system, but the Great Depression prevented many from moving up the social scale. The children of many of the earlier Finnish immigrants who settled in the rural areas of northern Ontario retained the Finnish language and customs. In the 1970s, as a result of a growing cultural consciousness and support from various government agencies, a number of Finnish-language schools were established. In the 2016 Canadian census, 16, 345 people reported speaking Finnish as a mother tongue language (first language learned).

Many Finns played a leading role in the Canadian labour movement and in the establishment of co-operatives; during the 1930s some FOC leaders were prosecuted by the authorities for supporting communism. Many Finns within the FOC at that time opposed this activism and broke away to form new social clubs.