The Pentecostal movement, also known as Pentecostalism, is a charismatic faith known for expressions of the Holy Spirit through its members. According to the Pentecostal Assemblies of Canada, the largest Pentecostal denomination in Canada, around 235,000 people attend services in more than 40 languages across the country.

The Pentecostal movement, also known as Pentecostalism, is a charismatic faith known for expressions of the Holy Spirit through its members. According to the Pentecostal Assemblies of Canada, the largest Pentecostal denomination in Canada, around 235,000 people attend services in more than 40 languages across the country. 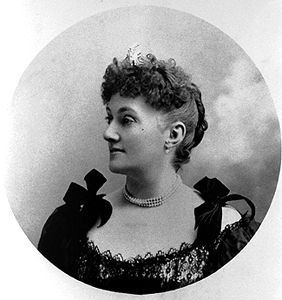 McPherson's theatrical pulpit techniques made her the most publicized revivalist in the world (courtesy Library and Archives Canada/C-52134).

The Canadian Pentecostal movement began in the early twentieth century with EvangelicalChristians who believed that the world was ready for a spiritual revival and organized prayer services. Many early Pentecostals were from Holiness Churches. They believed that the faithful must be sanctified by the Holy Spirit after they had been saved. After learning that a revival had begun under a man named W.J. Seymour in Los Angeles, some Canadian evangelicals travelled there to participate in what became known as the Azusa Street revival meetings. Seymour was a prominent African American religious leader, preacher and the son of freed slaves. He is widely acknowledged as one of the founders of modern Pentecostalism.

The message of the "baptism of the Holy Spirit" was accepted first at the Hebden Mission on Queen Street in Toronto. Soon Anglicans, Mennonites,Roman Catholics, and Methodists were joining those from evangelical and holiness denominations in affirming that they, like Christ's apostles on the first Christian Pentecost (Acts 2), had spoken in other, unlearned languages. Speaking in tongues was seen as evidence of this "second blessing."

Speaking in tongues, a way of speaking that some consider a holy language, often occurs during a Pentecostal church or religious service. Speaking in tongues is thought by some to be a gift of the Holy Spirit. Pentecostal believers also perform adult baptisms. The baptism is a water immersion given to those who have accepted the faith and have established a personal connection with God. (See also Baptists.)

Hostility from local churches and the need to share their experiences led the revivalists to form the Pentecostal movement, an umbrella structure that includes a range of theological and organizational perspectives. The Pentecostal Missionary Union was formed in 1909, initially for missionary purposes. Some leaders were reluctant to formalize the movement into an organization, either because they regarded church governance as man-made, or because they feared the inflexibility of their old church hierarchies.

By 1917 the Pentecostal society was required to register with the government to obtain building permits for churches, orphanages and schools that were necessary to accommodate the growing congregations' needs. This fact, combined with the existence of government regulations for missionaries sent abroad and the need for doctrinal and disciplinary structure within the movement, led to the formation of different associations. These centred on doctrinal issues (the Apostolic Church of Pentecost, for example, which rejected trinitarianism), ethnic identity (the German Pentecostal Church) or locale (the Pentecostal Assemblies of Newfoundland).

Pentecostals have remained somewhat traditional on matters of social policy. In the past, Pentecostal ministers could not marry people who had been divorced because divorce was regarded as a sign of sin. In 1993, however, within the Pentecostal Assemblies of Canada (PAOC), the policy was changed to allow remarriage. As the movement became more middle class, it allowed for the adoption of popular music into its rituals and using radio and television to reach people. Pentecostals have moved to the suburbs and built highly organized programs focused within large auditorium buildings. At the same time, many smaller churches in rural areas have either merged or closed.

Pentecostals have had similar problems as other denominations in attracting and holding enough ministerial staff for the small rural congregations. In some cases, independent groups will establish themselves where the larger organizations no longer wish to support the group financially. By the same token, independents have undertaken initiatives on their own. For example, among Indigenous populations so that today it is possible to see Pentecostal churches on small reserves, often served by a local preacher who lives among his or her parishioners but without affiliation to any of the larger Pentecostal organizations.

Another example this trend is the Toronto Airport Christian Fellowship (TACF). In 1994, a group of about 360 people would meet at the end of a runway Toronto’s Pearson International Airport. Held as an "outpouring of the Spirit," the revival came to be known as "The Toronto Blessing."

Pentecostals in Canada have been more restricted in their use of television than their American counterparts. There, preachers such as Oral Roberts drew a massive number of followers through TV; in Canada, theCRTChas restricted the use of national TV for denominational purposes. The most recognized Pentecostal TV evangelist in Canada was David Mainse, former host of100 Huntley Street, whose message was required to be nondenominational in its emphasis. Historically, Canada's best-known Pentecostal preacher was Ontario evangelist Aimee Semple McPherson who moved to Los Angeles and established the International Church of the Foursquare Gospel, an American organization with branches in Canada.