Dawson (also Dawson City), Yukon, incorporated as a town in 1904, population 1319 (2011c), 1327 (2006c). The Town of Dawson is located on the east bank of the Yukon River at the mouth of the Klondike River, 530 km north of Whitehorse. The name Klondike comes from the native name Tron-Duick or Tron-Deg. believed to mean "Hammer Water" from the fact that the Han hammered stakes into the river bottom, creating a trap to catch salmon. They dried the salmon on the flat at the Klondike's confluence with the Yukon. In August 1896 Joseph Ladue, a trader and prospector, staked the flat as a townsite in anticipation of a rush into the Klondike valley (see Klondike Gold Rush).

The townsite was surveyed by William Ogilvie and named after George M. Dawson, director of the Geological Survey of Canada and leader of the expedition that explored the region in 1887. Although Dawson became the Yukon capital in 1898, it lacked municipal institutions until after the turn of the century, when it received its charter as a city (1902).

At the axis of two transportation corridors, Dawson grew quickly as the transshipment point for men and materials destined for the Klondike goldfields. As a port, it developed service industries for the people who disembarked, and it became the mercantile and distribution centre of the Yukon. At the height of the gold rush in the summer of 1898, the Klondike region had a population of about 30,000, of whom some 16,000 could be found in Dawson.

In April 1899 there was a devastating fire that destroyed 117 buildings, but Dawson was rebuilt by that summer. However, the gold had run out and news of a gold strike in Nome, Alaska, nearly emptied Dawson by summer's end. Shortly after receiving civic status it was reincorporated as the town of the City of Dawson (1904), hence it remains commonly known as Dawson City. The town continued to decline throughout the following decade as the introduction of sophisticated mining technology slowly drove people from its hinterland, thus reducing the need for its services.

World War I further curtailed mining activity, and the next 20 years saw little development in the Klondike. Dawson experienced some growth when the mining industry expanded in the 1930s, but World War II disrupted gold production again.

The building of the Alaska Highway enabled Whitehorse to supersede Dawson as the commercial and administrative centre of the territory, and the capital was transferred south in 1953. The opening of the Klondike Highway in the same period put an end to commercial traffic on the Yukon River and rendered Dawson's port facilities obsolete.

Another blow came in 1966, when the Yukon Consolidated Gold Corp shut down its last dredge in the Klondike valley at Bear Creek. Since then, tourism has been the major industry for Dawson's permanent residents.

In the early 1960s Parks Canada began to refurbish and reconstruct buildings in Dawson, including the Palace Grand Theatre (1899) and the Commissioner's Residence (1901). Parks Canada has restored and stabilized not only buildings in Dawson, but Dredge No 4 on Bonanza Creek - the largest wooden-hull, bucket-line dredge in North America - and the sternwheeler, S.S. Keno. They have also acquired the community of Bear Creek with all of its buildings. Altogether, these conservation and restoration efforts comprise the National Historic Sites of Canada in the Klondike.

The Dawson City Museum is housed in the Old Territorial Administration building (designed by Thomas Fuller and built 1901). People from throughout the Yukon flock to Dawson to celebrate Discovery Day, a territorial holiday commemorating the discovery of gold on 16 August 1896 (the claim was staked on August 17) by George Carmack, Skookum Jim and Tagish Charley. 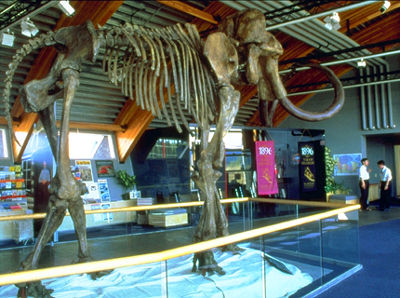