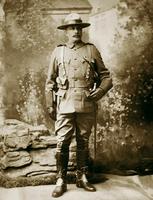 A man of enormous physical strength and endurance, Steele managed to be where the action was hottest (courtesy Library and Archives Canada/PA-28146).

Fort Steele, BC, unincorporated area within East Kootenay region, now centred by Fort Steele Heritage Town, a provincial heritage site located at the junction of Wild Horse Creek and the Kootenay River, 17 km northeast of CRANBROOK. The region was originally settled by the KOOTENAY (Ktunaxa). In 1864 the Wild Horse Creek gold rush brought European settlers to the area. The ferry crossing on the Kootenay River was operated by John Galbraith, and was called Galbraith's Ferry. The establishment of INDIAN RESERVES and renewed settlement pressures created friction between the native and European settlers, resulting in the establishment of the first NORTH-WEST MOUNTED POLICE (NWMP) post west of the Rockies in 1887. Commanded by Samuel B. STEELE, the NWMP departed in 1888 after defusing tensions. The townsfolk petitioned Ottawa to change the name from Galbraith's Ferry to Fort Steele.

From 1892 to the present, mining (gold, lead, zinc and silver) has been an important part of the economic development of the immediate region. The construction of the BC Southern Railway to Cranbrook in 1898 sealed the fate of Fort Steele, which quickly faded. In 1963 the provincial government acquired the townsite and restored it as its premier heritage site. Today the more than 60 original and recreated display buildings anchor a region predominantly supported by tourism and some ranching.