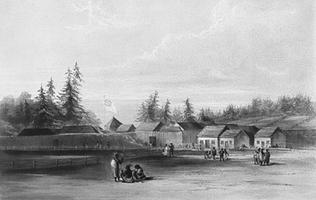 Fort Vancouver, a HUDSON'S BAY CO fur-trade post, was originally constructed in 1825 by Dr. John McLoughlin about 150 km inland on the north bank of the Columbia River, 8 km above the mouth of the Willamette. In 1829, the site was shifted closer to the Columbia, about 2 km west of the old fort. The newer structure is Fort Vancouver, the remains of which were unearthed and are now a historic monument in Vancouver, Washington. Strategically located to protect British interests, it was the company's Columbia district headquarters, and all trading and shipping operations west of the Rockies were directed from it. The fort was enclosed by a large stockade and was self-supporting, with farming, fishing and sawmilling being developed adjacent to it. The OREGON TREATY of 1846, which placed the fort in American territory, forced the company to transfer its depot to FORT VICTORIA in 1849, eventually abandoning the fort in 1860.