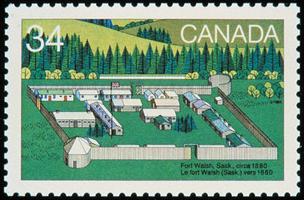 As inspector in the North-West Mounted Police, he dealt fairly with Sitting Bull and his followers (courtesy Royal Canadian Mounted Police).

Fort Walsh, located in the CYPRESS HILLS, 170 km southwest of present-day Swift Current, Saskatchewan, was an early North-West Mounted Police post constructed in 1875 by men under the command of Inspector James WALSH, for whom it was named. It became the headquarters of the force in the West in 1878, and until it was dismantled and abandoned (1883), Fort Walsh played a vital role in preparing the Canadian West for peaceful settlement. A bustling frontier town sprang up near the fort. After the fort was dismantled, the population moved to establish MAPLE CREEK, Sask.

Following the defeat of General George Custer (1876), the Mounted Police centered at Fort Walsh were called upon to mediate with refugee Sioux who had followed Chief SITTING BULL across the US border, thereby creating an international incident. With the coming of the railway, the signing of treaties and the return of the Sioux to the US in 1881, Fort Walsh was abandoned. In 1942 the RCMP established a remount ranch to breed and raise horses for the force. In 1968 the property was transferred to Parks Canada and became a national historic site.