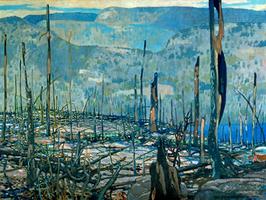 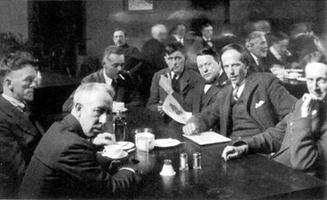 Education and Early Life and Career

Among those who founded the Group of Seven in 1920, Frank Johnston was unusually well trained in academic practice, first at Toronto's Central Technical School with Gustav Hahn and at the then Central Ontario School of Art with William Cruikshank and George Andrew Reid. He studied in brown autumn landscape, the clouds mirroring the colour of the landscape.

The Group of Seven and Beyond

A versatile artist equally comfortable painting in oil, watercolour or tempera, Johnston painted everything from pastoral scenes in the Ontario and Québec countrysides to the landscape and peoples of the Arctic, where he was sent in 1939 by Gilbert LaBine, vice president of Eldorado Gold Mines. As his career evolved, he moved toward a traditional form of realism closer to that of 19th-century painters such as Homer Watkins than to the more modernist approach of such artists as Tom Thomson or Lawren Harris. Serenity (1922), for instance, is a view out over a lake from a slight elevation, the centre of the picture dominated by a huge, sun-struck cloud. A factory smokestack spewing smoke is visible in the distance; dark rainclouds creep into the scene from the image’s upper edge. Mid-Summer Woods (1930), on the other hand, is an intimate and brightly coloured view of a break in the woods, sun and blue sky shining down through the dappled green leaves. And in what may be his most famous work, Shack in the Woods (1940), there is a humble cottage nestled in snow woods, sunlight glancing off the fresh snow.