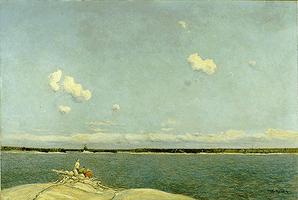 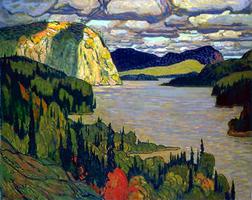 James Edward Hervey MacDonald, painter (b at Durham, Eng 12 May 1873; d at Toronto 26 Nov 1932). Among the Group of Seven, of which he was a founder, J.E.H. MacDonald was one of the best trained, first at the Hamilton Art School from about 1887 and, after 1889, in Toronto lithography houses and at the Central Ontario School of Art and Design, where he studied with William Cruikshank. In 1895 he joined Grip Ltd, an important commercial art firm, where he encouraged the staff (which included Tom Thomson from about 1907) to develop as painters. MacDonald was a key member of the later Group. Lawren Harris recalled that a show of MacDonald's in 1912 at the Ontario Society of Artists gave him his first recognition of the Group's "ethos."

MacDonald was Harris's greatest early friend among the Toronto painting community. Together in 1913 they went to the Albright Art Gallery in Buffalo, NY, to see the survey of Scandinavian landscape painting which was to influence their work. Around this time MacDonald introduced more colour into his dark panels. Algoma, north of Lake Superior, which he visited several times with Harris's help from 1919, became the country of his heart. His best paintings were done there, often of great vistas in a turbulent, patterned style. The sketch Mist Fantasy, Sand River, Algoma (1920, National Gallery of Canada) shows how he used the sketches he made in Algoma: the finished canvas (1922, now in the Art Gallery of Ontario), with its long ribbons of mist, was noted by a later critic as the height of MacDonald's way of stylizing form. In 1924 he made the first of 7 trips to the Rockies, another favourite painting place.

MacDonald's palette was dark, tough and rich, like A.Y. Jackson's, but his colouring was more fiery and his style more elegant. His sense of composition was oriented towards his meditation on design, a subject in which he was a master (he was the greatest calligrapher of the period and a designer of consequence). Like other members of the Group, he loved Chinese and Japanese art.

Among other tasks he performed was the decoration of St Anne's Church, Toronto (1923), and teaching at the Ontario College of Art. He also wrote poetry after a nervous breakdown in 1917. He was an eccentric gardener and enjoyed playing on a set of chimes made of old plough points. One of his favourite authors was Henry David Thoreau, for whom he named his son, illustrator Thoreau MacDonald. 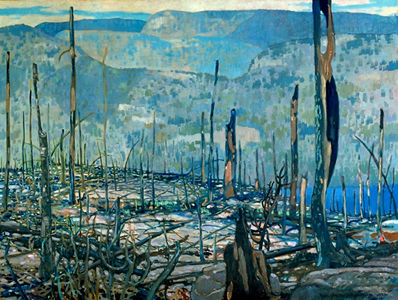