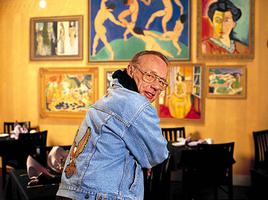 Freeman Wilford Patterson, photographer (b at Long Reach, NB 25 Sept 1937). Freeman Patterson is one of Canada's most popular landscape photographers. He is particularly acclaimed for his sensuous colour and technical skill in images that evoke the spiritual qualities of nature.

Patterson developed an interest in photography while studying for a Master's of Divinity at Union Theological Seminary, New York, during the early 1960s. In 1965 he gave up a position teaching religious studies in Alberta in order to devote himself to photography full time. Patterson's photographs are best known through pictorial publications. His contributions to such NATIONAL FILM BOARD OF CANADA photographic books as Canada: A Year of the Land (1967) and Between Friends/Entre Amis (1976) first drew an enthusiastic public to his work.

A teacher and frequent writer on photography, Patterson is the author of several instructive guides on photographic technique and aesthetics including Photography for the Joy of It (1967), Photography and the Art of Seeing (1979) and Photography of Natural Things (1982). In addition, he also edited the journals Photo Flash (1964-1968) and Camera Canada (1968-1982). Since the 1980s, Patterson has been best known for his own photographic books depicting the beauty of nature, including Namaqualand: Garden of the Gods (1984), Portraits of Earth (1987), In a Canadian Garden (1989), The Last Wilderness: Images of the Canadian Wild (1990) and One Planet, One Man (1994).

Patterson has been the recipient of many awards, among them the ORDER OF CANADA (1985) and the Photographic Society of America's prestigious Progress Medal (1990).