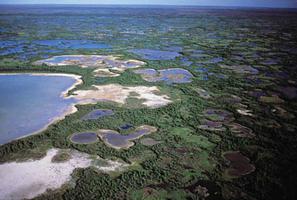 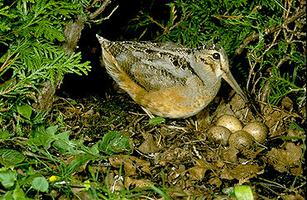 The nest of the American woodcock is a sparingly leaf-lined depression on the ground (Corel Professional Photos). 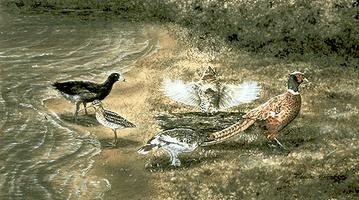 Game bird is not a scientific term, but refers to any bird that is hunted. There are 2 categories in Canada, migratory and nonmigratory. Migratory game bird seasons are regulated by the federal government under authority of the Migratory Birds Convention Act (1917) (see also waterfowl). Although nonmigratory, 2 species of murres are regulated by the federal governement. These seabirds can only be harvested by residents of Newfoundland and Labrador.

Provinces and territories have the authority to set hunting regulations for upland game birds which are considered to be nonmigratory, although some grouse populations may migrate long distances. This article deals with upland game birds.

Nine members of the grouse family (Tetraonidae) are found in Canada: spruce grouse (Dendragapus canadensis) in coniferous forest everywhere except Prince Edward Island and introduced to Newfoundland; blue grouse (D. obscurus) in coniferous forest and savannah in Alberta, BC, the Yukon and southwestern Northwest Territories; sage grouse (Centrocercus urophasianus) in southern Alberta and Saskatchewan and formerly BC on sagebrush ranges; ruffed grouse (Bonasa umbellus) everywhere in deciduous forest, introduced into Newfoundland; sharp-tailed grouse (Tympanuchus phasianellus) in open and brushy habitat in muskeg and grassland from the James Bay region of Québec west to BC; white-tailed ptarmigan (Lagopus leucurus) in alpine areas of the West; rock ptarmigan (L. mutus) in tundra and alpine habitats in BC, the Yukon, the Northwest Territories, Nunavut, Québec and Newfoundland, in winter to northern Saskatchewan, Manitoba, and Ontario; willow ptarmigan (L. lagopus) in tundra, sub-tundra and alpine habitats in BC, the Yukon, the Northwest Territories, Nunavut, Alberta, Manitoba, Ontario, Québec, Newfoundland and in winter in northern Saskatchewan. The greater prairie-chicken (T. cupido), formerly found on the prairies and in Ontario, has been extirpated (see Endangered animals and COSEWIC ).

Seven species of the pheasant family (Phasianidae) are found in Canada. The northern bobwhite (Colinus virginianus), found in brushy areas near agricultural land in Ontario, where it is now endangered, was introduced successfully to BC and unsuccessfully to Manitoba and Alberta; California (Callipepla californica) and mountain quail (Oreortyx pictus), introduced to southern BC from the US, occupy wooded and brushy range.

From Europe and Asia came the ring-necked pheasant (Phasianus colchicus) and the grey partridge (Perdix perdix), now established on agricultural land locally in all provinces but Newfoundland; and the chukar (Alectoris chukar), established in the dry interior of BC and in southern Alberta. The wild turkey (Meleagris gallopavo) disappeared from Ontario around 1902 but has been introduced locally in Ontario, Manitoba, Saskatchewan and Alberta.

The sandhill crane (Grus canadensis; family Gruidae) breeds on tundra and muskeg from Baffin Island and the James Bay area of Québec west to Siberia and locally on the Prairies. It migrates through western Ontario, the prairies and BC. The endangered whooping crane (G. americana) breeds in Wood Buffalo National Park and winters in the US. It is totally protected.

Six species of the migratory rail family (Rallidae) are widespread enough to be hunted in marshes in Canada, and 7 more are of casual occurrence. The American coot (Fulica americana), west of New Brunswick, and the common moorhen (Gallinula chloropus), in southern Ontario and southwestern Québec, are most commonly hunted. The smaller Virginia rail (Rallus limicola), absent only from Prince Edward Island, and the sora rail (Porzana carolina), found in all provinces, are rarely taken; the tiny yellow rail (Coturnicops noveboracensis), absent from Newfoundland, Prince Edward Island, Yukon, Nunavut and BC, is rarely shot; and in southern Ontario the king rail (R. elegans) is fully protected as endangered.

The American woodcock (Scolopax minor; family Scolopacidae), found from Manitoba to the east in woodlands, and the common snipe (Gallinago gallinago), found in all provinces and territories, are hunted in marshes and wet pastures.

Two members of the pigeon family (Columbidae) are hunted: the band-tailed pigeon (Columba fasciata) in the forests of western BC and the mourning dove (Zenaida macroura) found in agricultural land in all provinces except Prince Edward Island and Newfoundland. The once abundant passenger pigeon (Ectopistes migratorius) is extinct.

Not all the species mentioned above are legally hunted wherever they occur. Harvest is controlled by bag limits and by length and timing of seasons. The harvest in Canada exceeds 2.8 million. Precise figures for provincially regulated species are not available. Approximate figures for migratory species are 100 000 American woodcocks, 45 000 common snipes, 10 000 American coots, 5500 sandhill cranes, 600 mourning doves, 1300 band-tailed pigeons and 800 rails.

Hunting in the 19th century was probably responsible for the extinction of the passenger pigeon and endangered the whooping crane. Degradation of habitat caused the extirpation of the greater prairie-chicken and endangers the king rail and the northern bobwhite.