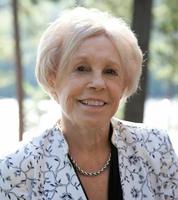 Geneviève Salbaing, née Nehlil, dancer, choreographer and director (b at Paris, France 2 Feb 1924). As co-founder and for many years artistic director of LES BALLETS JAZZ DE MONTRÉAL, Salbaing has championed a style of dance in Canada that blends classical BALLET with the freer forms of jazz-dance to produce dynamic, accessible stage entertainment.

Although born in Paris, Salbaing was brought up in Casablanca, Morocco, where she received her ballet training. Later, in Paris, she studied with such famous Russian expatriates as Egorova and Kchessinska. She also took her baccalaureate in philosophy and studied for one year at the Sorbonne before leaving with her husband for the United States. She danced for 3 years with the Washington Concert Ballet and then moved to Montréal in 1946 where she soon met and performed with French-Canadian dancer Fernand NAULT.

The late 1940s were early days for ballet in Québec. Ballet was still regarded with suspicion by the Roman Catholic church. However, the arrival of television offered opportunities for performing and choreographing, and it was through Radio-Canada that she met another immigrant, Ludmilla CHIRIAEFF, and began to dance for her company. An injury forced Salbaing to redirect her interests towards theatre and, with a young family to raise, towards volunteer work in the performing arts, although she still occasionally took on choreographic projects.

In 1972, Salbaing co-founded Les Ballets Jazz with Eva VON GENCSY and Eddie TOUSSAINT. When they left to pursue independent interests, Salbaing became artistic director. Under her guidance the company, although often suffering financial hardship, toured widely in Canada and abroad. Under her direction Les Ballets Jazz travelled to 54 countries on 5 continents, giving almost 1500 performances. Salbaing also opened ancillary schools of Les Ballets Jazz in Québec City, Laval, Saint-Jean and Toronto and sought in Montréal to create a professional centre where those interested in choreographing and dancing to jazz music could find a creative home.

Although by the 1980s the style of Les Ballets Jazz (now BJM) was out of step with the genre of dance theatre and European "New Danse" that was sweeping Montréal, Salbaing persevered and broadened the choreographic scope of her company with the introduction of works by Argentine Mauricio Wainrot, American David Parsons and veteran Canadian Brian MACDONALD. She retired as artistic director in 1992 but retains a keen interest and involvement in its activities.

She was appointed a member of the ORDER OF CANADA in 1987. During celebrations of Queen Elizabeth I's Golden Jubilee in 2002 the Governor General of Canada paid tribute to Salbaing for her dedication to the company. A medal from the Federation du Canada commemorated BJM's 25th anniversary and Geneviève Salbaing, who guided the BJM through its initial 20 years, was received as an officer into the NATIONAL ORDER OF QUEBEC in 2012 for her work with the company.