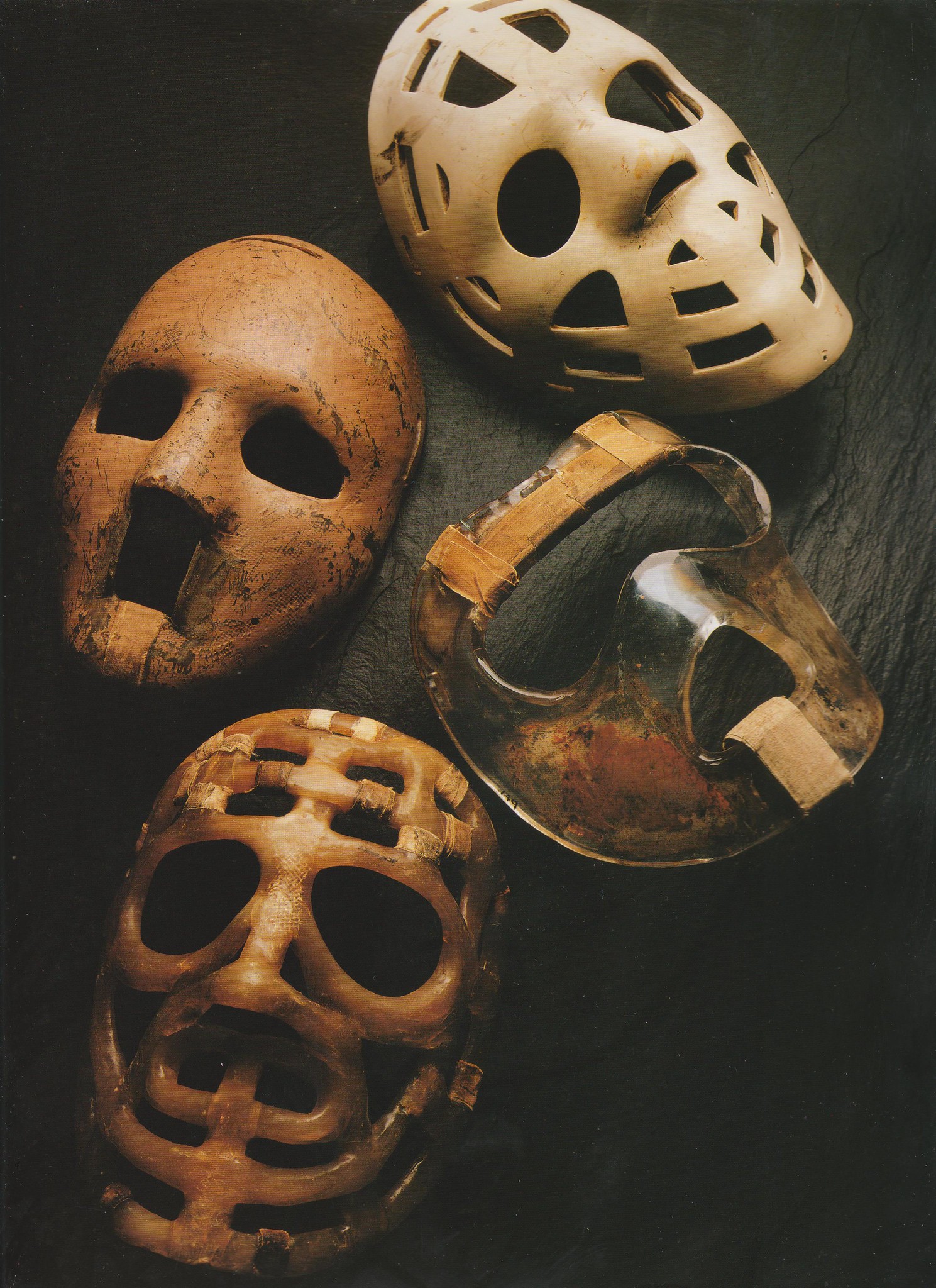 First Goaltenders to Wear a Mask

The first goaltender to wear a mask at any level of organized hockey was 21-year-old Elizabeth Graham of Queen’s University. On 7 February 1927, Graham wore a fencing mask in a 3–2 victory over the University of Toronto. According to Graham’s son Stewart, she wore a mask because “it made practical sense.” She had also recently had dental work done and wanted to protect her teeth.

On 20 February 1930, Clint Benedict became the first goaltender in the NHL to wear a mask. Benedict wore a thick leather face pad for the first time while playing for the Montreal Maroons in a game against the New York Americans at Madison Square Garden in New York. He wore the mask to protect a shattered cheekbone and broken nose that he had suffered from a shot by Howie Morenz on 7 January 1930. According to hockey historian Stephen Smith, Benedict looked like he “was appearing as a visitor from Mars.” However, the face shield was only temporary for Benedict, since he believed the large nosepiece impaired his vision. 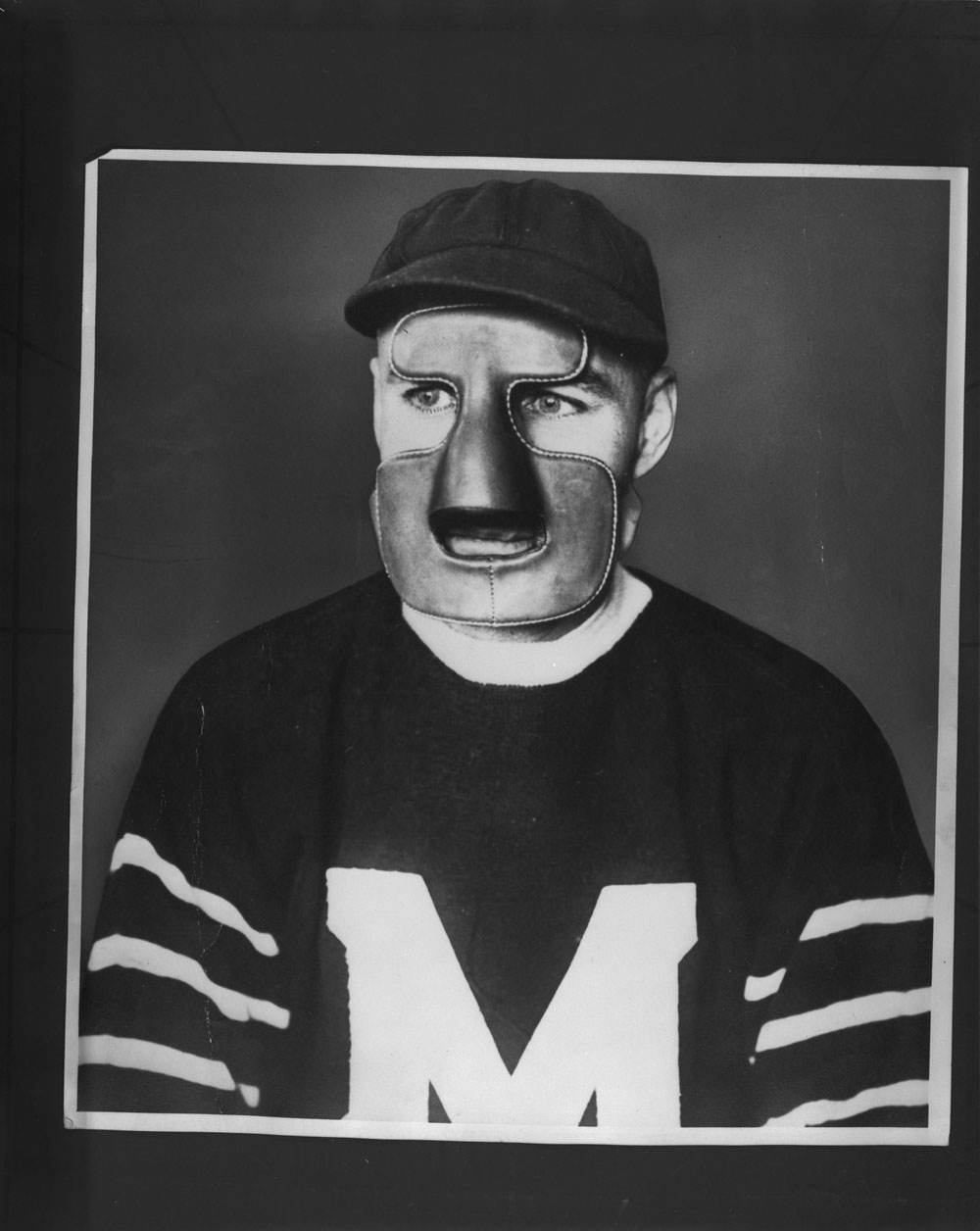 The first goaltender to wear a mask in competition at the Olympic Winter Games was Teiji Honma of Japan in 1936. He wore a metal cage over leather face padding, similar to a baseball catcher’s mask, to protect his glasses.

On 1 November 1959, Montreal Canadiens goaltender Jacques Plante received a cut on his face after blocking a slapshot from Andy Bathgate. Plante refused to go back into the game unless he wore a mask, which he used regularly in practice. The mask was custom-made for him by Bill Burchmore, a children’s hockey coach and Canadiens fan who worked at Fiberglas Canada in Montreal. Burchmore had proposed the mask to Plante in a letter earlier that year. At that point in Plante’s career, he had been in the NHL for seven seasons and had received 150 stitches on his face.

The person that needed to be convinced the most was Canadiens head coach Toe Blake; he believed Plante could not see low shots well if he wore a mask. Even after the injury, Blake pressured Plante not to wear a mask. On 8 March 1960, Plante played without a mask in a 3–0 loss to the Toronto Maple Leafs. After that, Plante always wore a mask. He played 11 more seasons in the NHL and one in the World Hockey Association (WHA).

Plante was widely criticized as a coward for his decision to wear a mask. Fellow goalie Gump Worsley once said, “Anyone who wears one is chicken. My face is my mask.” However, by the 1973–74 season, even Worsley wore a mask while with the Minnesota North Stars. The last NHL goalie to play without a mask was Andy Brown of the Pittsburgh Penguins in 1974. 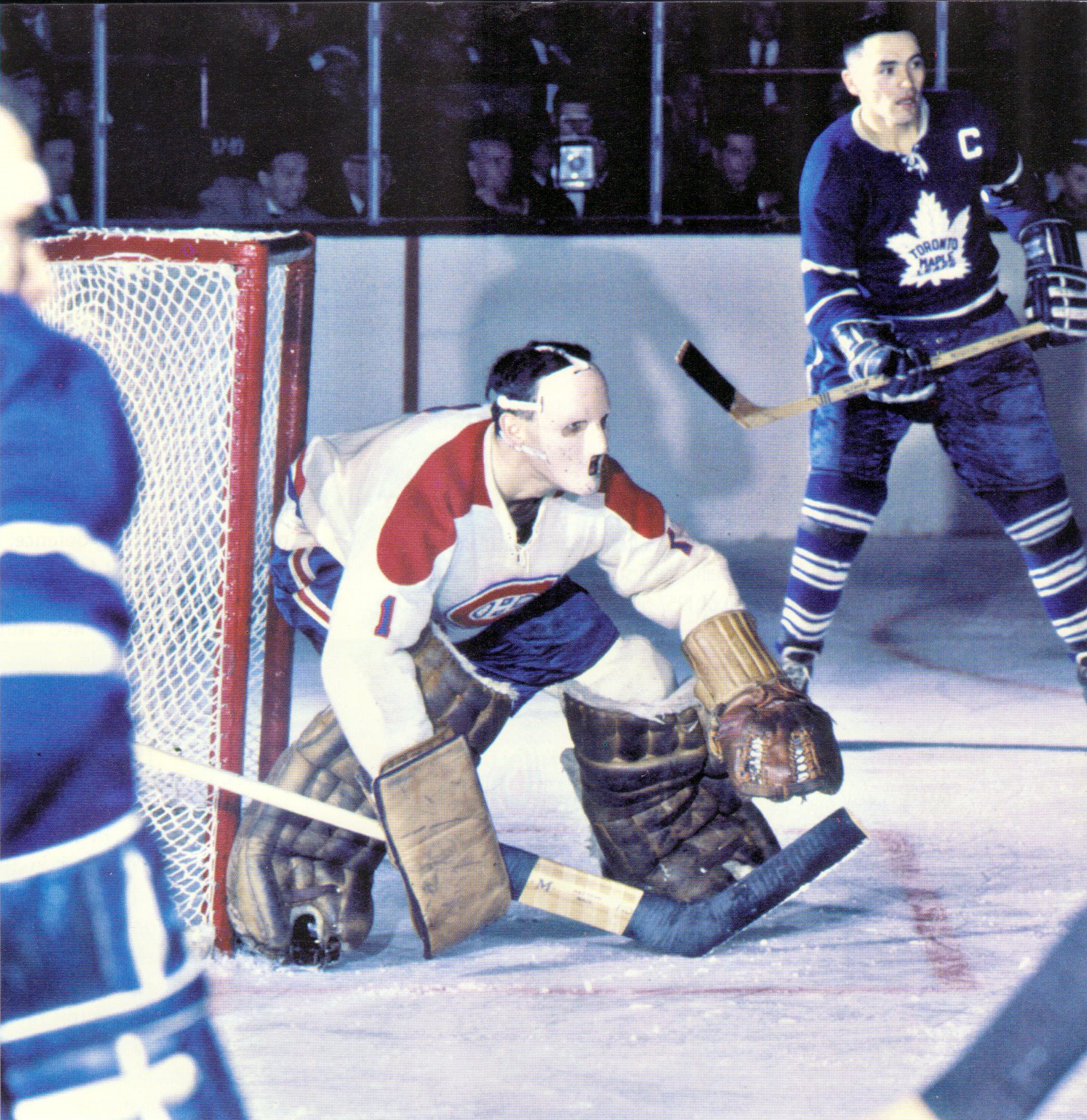 The initial type of mask Plante wore was a face-hugging mask. These masks covered the entire face except for the eyes and sometimes mouth. In addition to Plante, it was worn by Jim Rutherford, Gerry Cheevers, John Davidson, Bernie Parent and Grant Fuhr. The main issue with the face-hugging mask was its insufficient eye protection. Parent’s career ended when a stick hit him in the eye in a game against the New York Rangers in 1979. 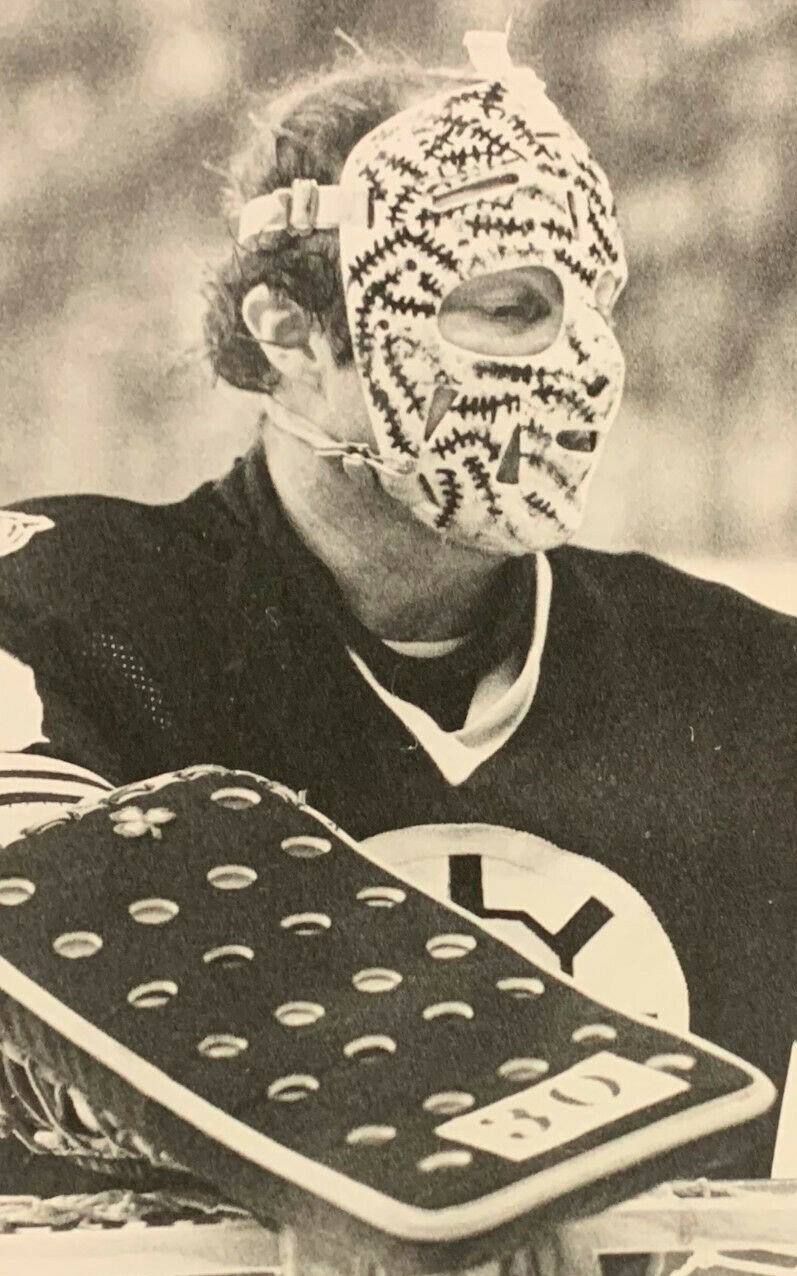 Boston Bruins trainer John “Frosty” Forristall painted a new stitch mark on Gerry Cheevers's mask every time he got hit in the face with a puck.

In 1978, Dave Dryden and Greg Harrison invented a fibreglass face mask with a cage over the eyes and nose. Dave Dryden, the older brother of Hockey Hall of Fame goaltender Ken Dryden, first started wearing this type of mask when he played with the Edmonton Oilers of the WHA in 1978–79. The popularity of the mask increased after Patrick Roy started wearing it in the 1985–86 season, and after Fuhr switched from a face-hugging mask to a mask designed by Harrison. 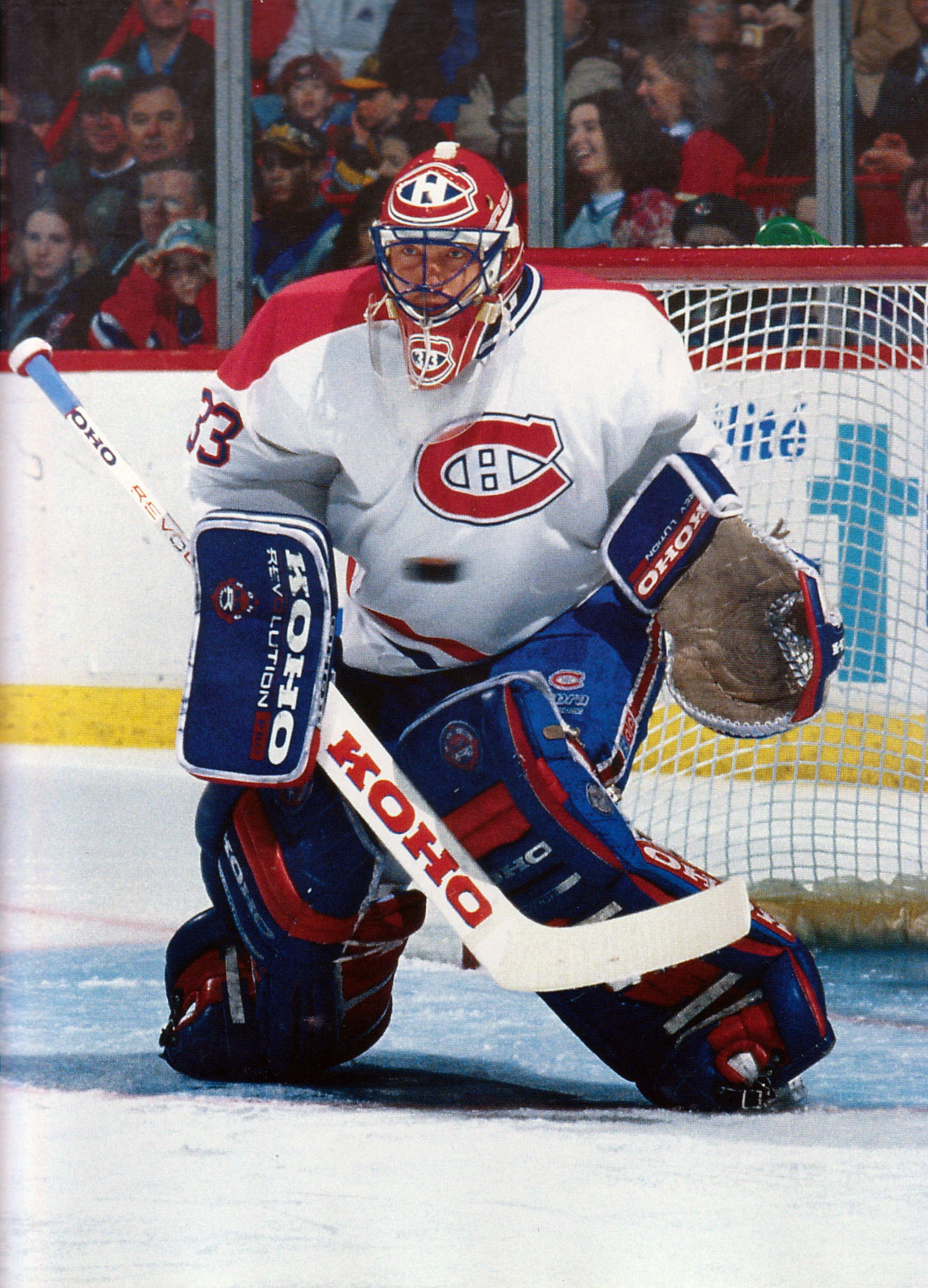 Hybrid-style masks with a fibreglass shell and face cage became more popular after Patrick Roy began using one during the 1985-86 season.

In the 1980s and early 1990s, many goalies wore a helmet and face cage (or “birdcage”) combination; they included Mike Vernon, Glenn Healy, Dominik Hasek and Clint Malarchuk. The helmet and cage combo was pioneered by Soviet goaltender Vladislav Tretiak in the early 1970s and became more commonly used in Europe.


However, a major problem with any goalie mask proved to be a lack of throat protection. On 22 March 1989, Malarchuk had his throat slashed by an errant skate blade during a game. He nearly died from the injury and needed 300 stitches to close the wound. Soon after, it was common for goaltenders to wear a Plexiglas neck visor attached to their mask. With throat protection, goalies could stretch themselves out more without a risk of serious injury. Goalies who added neck protection in the 1990s included Curtis Joseph, Chris Osgood, Kelly Hrudey and Bill Ranford.

On 13 September 1996, Charlie O’Brien of the Toronto Blue Jays became the first Major League Baseball (MLB) catcher to use a hockey-style mask in an MLB game. The mask was designed by O’Brien and Van Velden Mask Inc. of Hamilton, Ontario. The league initially had safety concerns, but O’Brien successfully made his case that goalie-style masks were safer than traditional catcher masks. The hockey-style mask generally provides better vision and ear protection, and it does not need to be taken off mid-play to catch pop-ups.


Since then, the goalie-style mask has been used by many MLB catchers, including Buster Posey, Martin Moldonado and Gary Sanchez. However, concerns have arisen over the ability of the goalie-style mask, which sits more firmly on the face, to properly protect against concussions. MLB catchers Alex Avila and David Ross, for example, both switched to old-school steel catcher masks (as opposed to newer catcher masks with titanium cages) after suffering concussions while wearing hockey-style masks.

When making a specialized mask, manufacturers make an impression of the goaltender’s head. After the impression is air-dried, plaster is then poured into the mold and a bust is created. The focus is then on creating the actual mask and making sure the area around the nose, mouth, and ears are properly sculpted. The next step is to make sure the masks are thick enough. Fibreglass and epoxy resins are placed on the bust to make the mask as smooth and as durable as possible. Rubber or foam padding is then added to the interior of the mask to add comfort and protection.

Once a facial opening is cut out and the mask is painted, a cage is fastened to the mask with stainless steel fasteners. The cage is made of either steel or titanium. Titanium is more commonly used because it is lighter and therefore more comfortable. A steel cage is heavier but also stronger and safer, since it gives under pressure and therefore transfers less energy from an impact to the head.

In 2011, Hockey Night in Canada analyst Glenn Healy, who wore a helmet and face cage combo in his career as an NHL goalie, expressed concern over the construction of hybrid-style goalie masks worn by NHL goaltenders. He argued that the league was not testing goalie masks and that goalies with poorly constructed masks were getting head injuries. In 2015, equipment manufacturer Bauer recalled three types of goalie masks from Canada and the US after reports of nine instances where the titanium cages had been broken.

In the 2017–18 NHL season, 13 goaltenders suffered concussions. As a result, the NHL increased the testing of goalie masks. Previously, the masks only had to pass a safety standard test, which was established in 2014–15. Now, with expanded testing, scientists can study the impact of slapshots from all directions and analyze how the masks hold up. The league now also provides players with detailed specs on specific styles and brands of masks, similar to information on helmets that the National Football League (NFL) provides to its players. 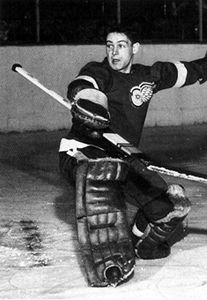 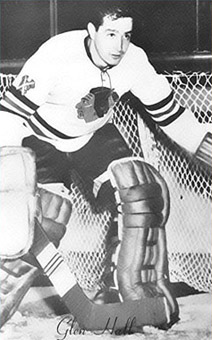