Hartland, NB, incorporated as a town in 1918, population 947 (2011c), 947 (2006c). The Town of Hartland is located at the mouth of Becaguimec Stream, 124 km upriver from Fredericton on the SAINT JOHN RIVER. First settled in 1802 by William Orser, a New York LOYALIST, the community developed in the 19th century from being the commercial centre for the surrounding farms to being the site of many small manufacturers. This varied economic base shifted towards specialization in the 20th century with the development of potato-chip production (Humpty Dumpty Ltd) and trucking (Day and Ross Ltd, one of the 10 largest transport companies in Canada). 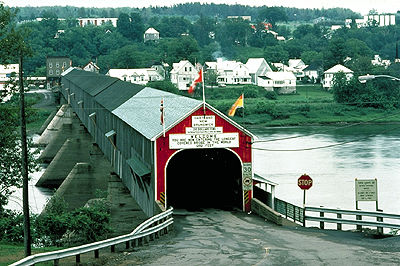 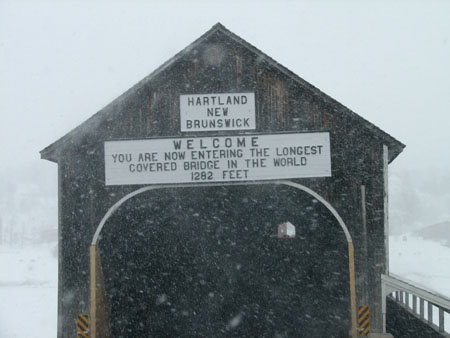 Although the town's main street has been considerably altered by fire and flood in the last few decades, Hartland is steeped in history. Three New Brunswick premiers (James Kidd FLEMMING, Hugh John FLEMMING and Richard HATFIELD) have hailed from here. The 391 m Hartland Covered Bridge is the longest covered bridge in the world, attracting visitors from around the world. Potatoes are still the staple of the economy. At the middle of New Brunswick's Bible belt, Hartland is the home of the New Brunswick Bible Institute.