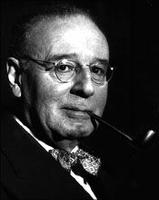 James Healey Willan, composer, organist, choir director, educator (b at Balham [London], Eng 12 Oct 1880; d at Toronto 16 Feb 1968). A dominant figure in Canadian musical life for over half a century, Willan influenced several generations of composers, organists, choir directors, singers and audiences through his teaching and example. After immigrating to Canada in 1913 he taught at the Toronto Conservatory (1913-36) and U of T (1937-50).

From 1921 until his death he was organist-choirmaster of the Anglican Church of St Mary Magdalene. In 1940 an American visitor said there were only 2 places worth visiting in Toronto. One was the Chinese collection at the Royal Ontario Museum, the other was to hear the music at St Mary Magdalene with its choirs of blended voices using a pure, even sound without vibrato. Apparently uninfluenced by musical innovations of the times, Willan's compositions reflect variously the enthusiasms of his boyhood and training in Anglo-Catholic liturgy, choral music of Tudor and contemporary English masters and the rich romanticism of Brahms and Wagner.

He composed operas, symphonies, concertos and music for band, piano, organ, choir and solo voice - some 800 works in all. The Introduction, Passacaglia and Fugue (1916) for organ and An Apostrophe to the Heavenly Hosts (1921) for unaccompanied choir represent Willan's most opulent style, contrasting with the more austere liturgical music most frequently performed. Recordings of his choral motets, masses, and organ works on the Virgin and Gothic labels have been among the best-selling classical CDs of the late 1990s. Willan was made a Companion of the Order of Canada in 1967. In his memory an award of $5000 to the best amateur choir in Canada happens at the biannual choral competition sponsored by the CBC. Also his choral heritage is continued in the Healey Willan Singers of Toronto, a female choir founded in 2005.