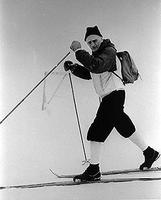 A pioneer in all forms of skiing, Johannsen acted as organizer, instructor, coach and official well into his nineties (courtesy Canadian Ski Museum).

Herman Smith Johannsen, "Chief Jackrabbit" (from his Cree name), ski pioneer (b at Horten, Norway 15 June 1875; d at Tønsberg, Norway 5 Jan 1987). One of the best all-round skiers in Norway during the early 1890s, he became a salesman of heavy machinery and made Montréal his headquarters in 1919. In 1932 he settled in Piedmont, Qué, and began spreading ski trails throughout the Laurentians.

A pioneer in all forms of skiing, Johannsen acted as organizer, instructor, coach and official well into his nineties. He was patron of the CANADIAN SKI MARATHON, and in 1979 became involved in the Jackrabbit Ski League, a nationwide children's ski program started in his honour that has trained over 125 000 young skiers since its inception. He was awarded the Order of Canada in 1972 and inducted into the Canada Sports Hall of Fame in 1982.