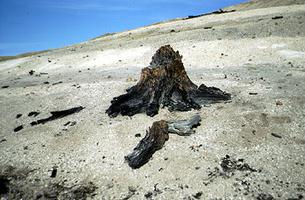 About 350 million years ago, a brackish lagoon near Miguasha, Québec, was the burial site of outstandingly preserved specimens of about 2 dozen species of lungfish and lobe-finned fishes. 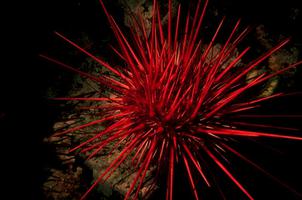 Their effectiveness in capturing other planktonic animals makes jellyfish an integral part of oceanic food chains (artwork by Claire Tremblay). 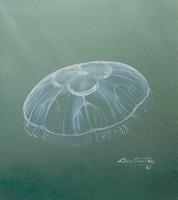 A fossil plant from the progymnospermopsida group, which were the trees that made up the planet's first forests (photo by Brian Chatterton).
PreviousNext

The study of FOSSILS was a relatively new science when the geological exploration of Canada began. The first Canadian geologist, and the first to apply the principles of geochronology (GEOLOGICAL DATING) in Canada, was William LOGAN, a native of Montréal, trained in the geology of England and Wales. In 1842, he was appointed to make a geological survey of the United PROVINCE OF CANADA. He began in 1843 by measuring, mapping and systematically subdividing the Devonian rocks (408-360 million years old) of the Gaspé Peninsula. Within the next few years he extended his surveys to the earlier Palaeozoic formations of the Eastern Townships of Québec, as well as to the non-fossil-bearing rocks of the Lake Superior region.

Thanks to the progress that had been made in identifying and mapping the Palaeozoic rocks (570-245 million years old) of western New York and northern New England, Logan was able to establish the broad correlations of the formations in the St Lawrence region. However, he did not have the time, and probably not the knowledge, to work out the details of the fossil succession. In 1856 he appointed Elkanah BILLINGS of Ottawa to be the full-time palaeontologist of the GEOLOGICAL SURVEY OF CANADA (GSC).

Billings, a successful lawyer and journalist, was an enthusiastic collector and student of fossils. In the next 20 years he amassed large collections of Palaeozoic fossils, which he described and assigned to their stratigraphic positions. Although concentrating on the Ottawa and St Lawrence river valleys, he extended his collecting and identifying to southwestern Ontario and Nova Scotia. He was especially interested in fossil ECHINODERMS and BRACHIOPODS.

While Logan and his colleagues were working out the GEOLOGY and fossil sequence for central Canada, J.W. DAWSON was doing the same for the Maritime colonies. In the process, he began the study of FOSSIL PLANTS in Canada, describing the flora of the "Coal Measures" (Pennsylvanian or Upper Carboniferous period, 320-286 million years ago) of Nova Scotia and the Devonian of Gaspé. He became the first principal of McGill and founded there the Redpath Museum, a centre for palaeontological research. Fossil plants from western Canada came to his notice, and he described AMPHIBIANS and MOLLUSCS from the hollow tree stumps associated with the coal seams of Nova Scotia.

Billings was succeeded (1876) as palaeontologist of the GSC by J.F. WHITEAVES of Montréal, an all-round naturalist. By this time, the geological exploration of the then North-West Territories and of Manitoba was beginning with the work of G.M. DAWSON and his GSC colleagues. Their fieldwork brought to light a series of new faunas, Ordovician (505-438 million years old), Silurian (438-408 million years old) and Devonian in Manitoba; Cretaceous (144-66.4 million years old) and Tertiary (66.4-1.6 million years old) from the future Saskatchewan and Alberta.

These were described by Whiteaves, who made correlations with faunas discovered in the western US. Whiteaves also began the study of fossil FISHES in Canada. His detailed accounts of the Devonian fish faunas of the Baie des Chaleurs area (Québec and New Brunswick) revealed persistent archaic groups (ostracoderms, antiarchs) contemporary with early lungfish and teleosts and, most exciting, a fringe-finned fish that was on the verge of becoming a limbed VERTEBRATE. Meanwhile, palaeontological work was proceeding in the classic fossil fields of central and eastern Canada.

The basic work on the Palaeozoic faunas of Ontario, begun by Billings, was refined and expanded by W.A. PARKS of University of Toronto, and by E.M. KINDLE, M.Y. Williams and Alice E. WILSON of the GSC. The older (Mississippian or Lower Carboniferous, 360-320 million years old) floras of New Brunswick and Nova Scotia were studied by G.F. Matthew of Saint John and W.A. Bell of the GSC. Their work, added to that of J.W. Dawson, established the sequence of plant life for the late Palaeozoic.

Dinosaur and Other Fossil Discoveries in Western Canada

The Cretaceous DINOSAUR faunas of Alberta and Saskatchewan are famous. They were first revealed by G.M. Dawson in 1874, and by his successors in the 1880s. L.M. Lambe, assistant to Whiteaves, provided the early descriptions of these fossils, but it was not until Barnum Brown of the American Museum of Natural History came to Alberta with a staff of well-trained collectors (1910) that the wealth and excellence of preservation of Canadian dinosaurs came to be realized.

To share in these discoveries, the GSC engaged the services of C.H. Sternberg of Kansas and his 3 sons. Their work, and especially that of the second son, C.M. STERNBERG, resulted in the assemblage, at the National Museums of Canada, of a very important dinosaur collection described by Lambe and later by Sternberg. W.A. Parks, assisted by Levi Sternberg, the youngest of the brothers, built up a fine collection of Alberta dinosaurs at the Royal Ontario Museum, and made them known to science. Fossil MAMMALS of Oligocene age (36.6-23.7 million years old) were found (1883) in the Cypress Hills, Saskatchewan, by R.G. McConnell of the GSC and described by E.D. Cope of Philadelphia. Subsequently, Lambe collected and described additional specimens, correlating them with the White River Group of South Dakota.

A late Miocene mammalian fauna (23.7-5.3 million years old) was found (1929) in southern Saskatchewan by C.M. Sternberg. L.S. Russell described Palaeocene mammals from Alberta and Saskatchewan, a late Eocene mammalian fauna from Saskatchewan and an early Oligocene fauna from southeastern BC. Another famous fossil occurrence in Canada is in the Middle Cambrian BURGESS SHALE in the Rocky Mountains near Field, BC. This was discovered (1909) by C.D. Walcott of the Smithsonian Institution, who was a specialist in Cambrian faunas. The remarkable aspect of the Burgess Shale fauna, revealed by Walcott's 5 seasons of excavation and by numerous monographs, was the presence of a rich assemblage of soft-bodied animals, remains of which would ordinarily not be preserved.

Early in the 20th century, commercial companies began drilling for PETROLEUM in the plains and foothills of Alberta. To carry out this activity intelligently, the companies required detailed stratigraphic data, which depended on knowledge of the succession and correlation of fossil faunas. A major step in this direction was provided by the work of F.H. McLearn of the GSC. He revised the Triassic (245-208 million years old), Jurassic (208-144 million years old) and Lower Cretaceous fossil molluscs of the foothills and northern plains of Alberta and those of Haida Gwaii, and established correlations with similar faunas in the US, Europe and Asia. P.S. Warren of University of Alberta also made important contributions in this field, as well as with the late Palaeozoic faunas of the Rocky Mountains and the Subarctic.

The Study of Microfossils

Interest in exploration for oil and gas also stimulated the study of "microfossils," mostly Foraminifera, the hard parts of which could be recovered from well cuttings. Although some pioneer observations on such fossils had been made by G.M. Dawson, modern investigation of them in western Canada was begun (1927) by J.A. Cushman of Harvard and continued by one of his students, R.T.D. Wickenden of the Geological Survey. Among more recent workers in this field have been J.H. Wall and C.R. Stelck in Alberta and W.G.E. Caldwell in Saskatchewan and Manitoba.

A similar use has been made in Palaeozoic biostratigraphy of the jawlike and toothlike microfossils known as "conodonts." In 1897 G.J. Hinde, then at University of Toronto, described conodonts from local Ordovician rocks. In recent years there has been a revival of interest in them because of their stratigraphic importance; faunas have been described from Alberta, Ontario and farther east. Other Canadian palaeontologists have become recognized specialists on particular groups of fossils. W.A. Parks was noted for his numerous papers on stromatoporoids (Palaeozoic colonial organisms which superficially resemble corals).

Madeleine FRITZ, of University of Toronto, has contributed much to the knowledge of Palaeozoic Bryozoa. G.W. Sinclair, of the GSC, specialized in the Conularida, early Palaeozoic organisms possibly related to JELLYFISH. INSECTS are rare as fossils, but numerous specimens do occur in the Eocene tuffaceous shales of interior BC. These were described by S.H. Scudder of Boston and Anton Handlirsch of Vienna, Austria. Scudder also described late Palaeozoic insects from Nova Scotia.

Almost every university in Canada has a collection of fossils, mainly used in teaching; but for size and number of type specimens, the most important collections are those of the GSC and the National Museum of Natural Sciences in Ottawa, the Redpath Museum of McGill University in Montréal, the Royal Ontario Museum in Toronto, University of Alberta in Edmonton and the Saskatchewan Museum of Natural History in Regina.