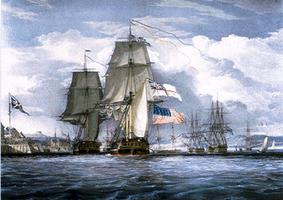 Few British ships are as celebrated for their victory in the War of 1812 as HMS Shannon. In June 1813, after a tough and bloody fight, the ship defeated and captured the USS frigate Chesapeake, dragging the symbolic American vessel to Halifax.

HMS Shannon was a fully-rigged, 38-gun Leda-class frigate, one of the largest frigates built for the Napoleonic Wars. It had two decks, with the main armaments on the upper deck, and could take on a complement of 330 men. Launched in 1806, the frigate was under the command of Captain Philip Broke, a graduate of the Royal Naval Academy who had served aboard Druid. Broke was already a veteran and had served aboard HMS Southampton at the battle of St. Vincent in 1797, where Britain defeated the Spanish fleet of Admiral Don Jose de Cordoba. Broke would soon make his mark as commander of Shannon.

During the Napoleonic Wars, the vessel served as part of Commodore Edward Owen's efforts against Boulogne, participating in a rocket attack of the town with the bombardment of Congreve rockets. It also engaged in protecting British fishing interests off the coast of Greenland (the island of Shannon is named in the ship's honour). Shannon participated in the taking of Madeira (1807), conducted towing operations for captured French vessels, and captured the privateer vessel Pommereuil.

Such varied experiences prepared the crew well for the war across the Atlantic. Under Broke's command, Shannon became one of the finest gunnery ships of the Royal Navy; Broke's crew was trained to fire at the hulls of enemy vessels instead of the masts. Broke steeled himself for individual ship-to-ship combat, refusing to capture American merchant vessels because such captures would require him to put crew on board the captured vessels to sail them to Halifax, which would cripple Shannon's efficiency.

HMS Shannon was ordered to service in North America in 1811, and stationed at Halifax. Broke was given command of a squadron charged with the maintenance of the naval blockade of France, and as the War of 1812 erupted, Shannon captured an early victory in the form of USS Nautilus, taken in July 1812. But Broke and his squadron's attempt to capture the USS frigate Constitution met with failure after a 60-hour chase. Indeed, most of the early British engagements with the US navy during the war met with failure. At the time, many American frigates were larger and faster, and some had more cannon than their Royal Navy counterparts. The results were often deadly.

In June 1813, Shannon recovered from her losses with the bloody capture of Chesapeake, the infamous vessel that had been the storm of controversy in 1807. Broke had drilled his men into a deadly and efficient war machine and while Chesapeake fought bravely, victory would belong to the British ship. Although damaged, and with many casualties among the crew, including Broke himself, Shannon captured Chesapeake and dragged it to Halifax in the aftermath of what some believe was the finest "ship-to-ship action" of the age of sail.

Later Career and a Namesake

Broke was made a baronet. HMS Shannon was passed on to the command of Humphrey Senhouse and underwent repairs. The vessel was placed in the reserve in 1831, renamed St Lawrence in 1884, and broken up in 1859 without ever matching its earlier glory, the pinnacle being the defeat of Chesapeake. A Liffey-class frigate was named HMS Shannon in 1855, serving during the Indian Mutiny, and was the ship from which the naval crew was launched during the Siege of Lucknow. Among the crew was William Neilson Hall, the first Black, the first Nova Scotian and the first Canadian naval recipient of the Victoria Cross.