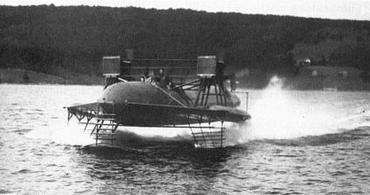 The hydrofoil was the creation of Alexander Graham Bell, his wife Mabel Bell and the engineer F.W. Casey Baldwin. On September 9, 1919, on the tranquil waters of the Bras d'Or, the hydrofoil raced across the surface of the lake faster than any person had ever travelled on water. At a time when the greatest steamships of the world made less than 60km/h, the HD-4 hydrofoil vessel was clocked at 114km/h.

Alexander Graham BELL, famous for inventing the telephone, developed the first successful hydrofoil, which he called the "hydrodrome." He conceived of the "heavier than water craft" in 1906. Bell, along with his wife, Mabel Bell, and colleague Frederick W. BALDWIN, began developing it in 1908 at Baddeck, NS.

Attempts to create a hydrofoil were made in England as early as 1861. A hydrofoil sustains its motion by the lift achieved by hydrofoil-plates that function in the water as airplane wings do in the air. As speed increases, the submerged hydrofoils, supported by vertical stanchions, raise the hull out of the water, thereby reducing the friction between the water's surface and the boat's hull, allowing even greater speed. If speed is increased further, the hydrofoils come out of the water, reducing lift to the weight of the boat. Resistance to forward motion remains constant at increased speed. In conventional watercraft, increasing speed increases resistance.