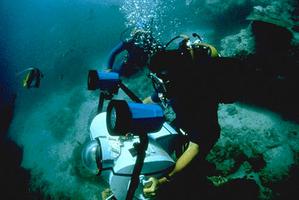 The IMAX camera in its underwater housing (courtesy Imax Systems).

Toronto-based IMAX Corporation is the world's most successful large-screen cinema system. Since its origins as Multi-Screen Corporation in 1967, IMAX has developed and operated many technologies aimed at an audience's complete immersion into the film experience. IMAX's business and aesthetic practice assumes that innovations in film technology lead to new advances in film realism.

IMAX emerged from the Expo 67 cultural context. Corporation co- founders Graeme Ferguson, Roman Kroitor and Robert Kerr all participated in some of the popular large- and multiple-screen film experiments that were part of the Montréal Expo. Along with engineer William Shaw, another co-founder, they developed a camera system that allowed for high-resolution images and enlarged projection. The Fuji group commissioned them to produce a large-format film for the Osaka, Japan, Expo 70 using their newly developed camera system. The film was Tiger Child (Donald Brittain, 1970), the first IMAX film. In 1971, the first permanent IMAX theatre was opened in the Cinesphere at Ontario Place, Toronto. The first Omnimax (or IMAX Dome), with its curved screen, was permanently installed at the Reuben H. Fleet Space Theatre, San Diego, in 1973.

IMAX projection systems have been installed in 129 theatres worldwide, as of December 1995. Many of these are located in specially constructed sites at tourist and educational institutions, such as the National Air and Space Museum in Washington, D.C., Taman Mini Park in Jakarta, Indonesia, and the Museum of Civilization in Hull. IMAX theatres and films have also appeared as centrepieces to pavilions at many expositions. This includes the Canadian Pavilions at Expo 86 in Vancouver, which screened the 3D film Transitions (Colin Low and Tony Ianzelo, 1986) and at Expo 92 in Seville, which presented Discovery (Colin Low and Tony Ianzelo, 1992). Discovery was an IMAX HD film, shot at twice the conventional speed (48 frames per second instead of 24) to provide high definition images.

The standard IMAX film uses 70mm film stock, turned on its side, with 15 perforations (that is, the sprocket holes on the side of the celluloid) designating the size of each frame. When projected the image is ten times the size of conventional commercial 35mm film, making it approximately eight stories high. To accommodate this format, the projectors advance the film forward using the "Rolling Loop" developed by Australian Ron Jones. This unique method operates by moving the film with a wave-like action, in this way assuring high standards for the focus and the steadiness of the giant projected image. As a special venue cinema, IMAX Corporation is vertically integrated, and is involved with production, post-production, distribution, theatre design, as well as the leasing of projection and camera technologies.

Always interested in more innovative ways to engulf the audience in its sound and image experience, IMAX continues to develop new cinema systems. Experiments include the advanced 3D IMAX Solido, IMAX Simulator Rides and IMAX Magic Carpet, which includes a transparent floor through which a second screen can be seen, thus creating a more effective illusion of flight. More recently, IMAX has become increasingly involved in the production of "ride films," short theme-park, film-based attractions designed to create a sensation of movement. The first of these film rollercoasters was the ride "Back to the Future", which opened in 1991 at Universal Studios Florida.

Over 180 IMAX films make up its library, though the corporation has distribution rights to only approximately 40%. The films have primarily been documentary, the most popular of which include The Dream Is Alive (Graeme Ferguson, 1985), about a Space Shuttle mission; Fires of Kuwait (1993), nominated for "Best Documentary" by the Academy Awards; Titanica (Stephen Low, 1991), about an expedition to the famed shipwreck; and the environmentalist The Blue Planet (Ben Burtt, 1990). Other popular films include the Rolling Stones concert film At the Max (Julien Temple, 1991) and the dramatic feature Wings of Courage (Jean-Jacques Annaud, 1995).

Roman Kroitor's esteemed work as part of the National Film Board's Unit B in the 1950s, the history of appropriating personnel from the NFB, and the primarily educational focus of the IMAX films are all evidence of a strong connection between IMAX and the film board. Some NFB filmmakers who have made IMAX films include Colin Low, John Spotton, Donald Brittain, Tony Ianzelo, John N. Smith and Ernest McNabb. Thematically and aesthetically, one can see aspects of the humanism and holistic world view typical of English-Canadian documentary in the 1950s, as well as careful attention to technical perfection reflected in IMAX productions.

IMAX received an Academy Scientific and Engineering Award from the Academy of Motion Picture Arts and Sciences for technological innovation and excellence (1986), a Canada Export Award from the Department of External Affairs (1988) and an Award of Excellence for contributions to Canadian culture from the Department of Communications (1991). In 1997, IMAX received an additional Academy Award for scientific and technical achievement.

In seeking to increase its capital for corporate expansion, IMAX corporation was sold to a US investment group, WGIM Acquisition Corporation, in 1994. It was then restructured and merged with Trumbull Company Inc. These changes left Hollywood special effects wizard Douglas Trumbull as Vice Chairman of IMAX and President of its Ridefilm division. Though its headquarters remains in Toronto, many wonder about the future consequences of the US ownership of this excellent extension of the Canadian experimental and documentary film traditions.