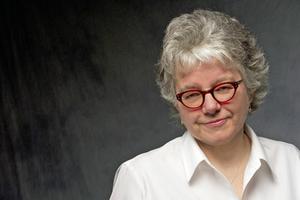 Jackie Maxwell has gradually relaxed the Shaw Festival's original mandate to produce plays by Bernard Shaw and his contemporaries, and championed the work of women playwrights and directors (photo by David Cooper, courtesy of Shaw Festival).

Jackie Maxwell, director, dramaturge (born 1956 in Belfast, Northern Ireland). Jackie Maxwell is a forceful and influential figure in contemporary Canadian theatre and is currently artistic director of the Shaw Festival in Niagara-on-the-Lake, Ontario.

Jackie Maxwell was educated at Belfast's Victoria College prep and grammar school from 1961to1973 and was a member of that city's Lyric Theatre youth program from 1966 to 1971. She graduated from the University of Manchester, England, in 1977 with an honours Bachelor of Arts degree in drama and settled in Canada in 1978 after meeting and marrying Canadian actor Benedict Campbell.

Jackie Maxwell honed her directing skills as an assistant to the artistic director at the National Arts Centre in Ottawa from 1979 to 1982 and as associate director at Toronto's Factory Theatre from 1982 to 1986. She was Factory's artistic director from 1986 to 1995, helping to create and develop new works by people such as George F. Walker, Michel Marc Bouchard, Sharon Pollock, Ann-Marie Macdonald and Michel Garneau.

Among Maxwell's critically acclaimed productions were Sally Clark's Moo (1988) and Raymond Storey and John Roby's 1992 musical Girls in the Gang (which won Maxwell a Dora Award for best direction).

From 1998 to 2000, Jackie Maxwell was director of new play development at the Charlottetown Summer Festival in Prince Edward Island and also continued to work as a freelance director. In 1998, she directed her playwright friend Shelagh Stephenson's The Memory of Water at Tarragon Theatre; the production won the Olivier Award when it was remounted in London and was presented by Mirvish Productions in 2000 at the Elgin/Winter Garden Theatre. She also directed the English-language premiere of Serge Boucher's Motel Hélène at Tarragon in April 2000 and Adam Pettle's Zadie's Shoes at the Factory Theatre in 2001 (later remounted for Mirvish Productions at the Elgin/Winter Garden Theatre).

Jackie Maxwell has been the Shaw Festival's artistic director since 2002, gradually relaxing the festival's original mandate to produce plays by Bernard Shaw and his contemporaries, and championing the work of women playwrights and directors.

Prior to taking up her appointment, she directed a well-received production of William Inge's Picnic at the festival in 2001; other Shaw credits since then include a number of Bernard Shaw plays (including an outstanding Saint Joan in 2007, a production that travelled to the Chicago Shakespeare Theater), Chekhov's Three Sisters, Marc Michel Bouchard's The Coronation Voyage and Githa Sowerby's Rutherford and Son (later seen at Ottawa's National Arts Centre). Among Maxwell's 2010 assignments was Brief Encounters, consisting of three one-act plays by Noel Coward, and in 2011 she directed the world premiere of the Jay Turvey/Paul Sportelli musical Maria Severa.

Jackie Maxwell has been dramaturge and teacher at the Banff Centre for the Arts, York University, George Brown College, Queen's University and the National Theatre School in Montréal. She was also guest artist/lecturer at the Graduate Centre for Study of Drama at the University of Toronto for eight years.

For her services to Canadian theatre, Jackie Maxwell has received the National Theatre School's Gascon-Thomas Award, an honorary degree of Doctor of Humanities from the University of Windsor, and the Herbert Whittaker/Drama Bench Award.