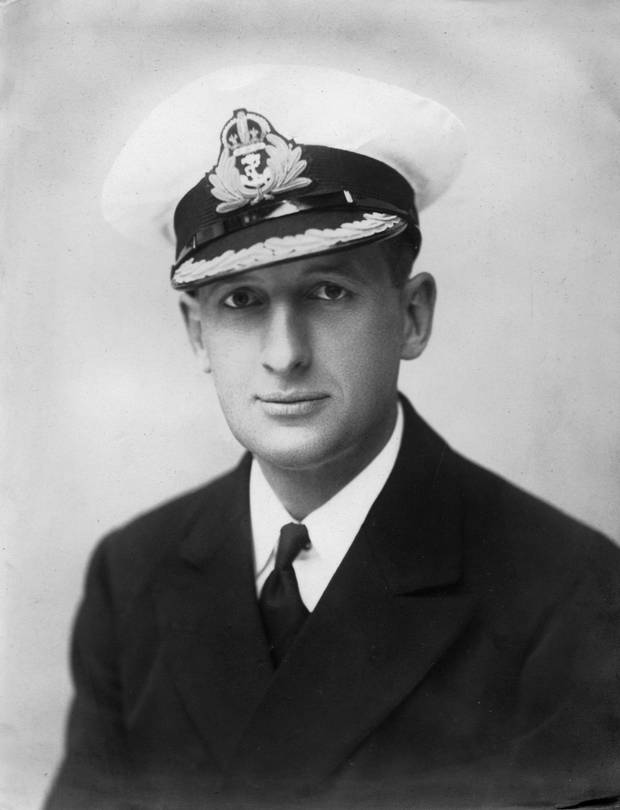 James Campbell Clouston — known as Campbell — was the eldest child of William Stewart Clouston and Evelyn Campbell. He was part of a prominent Montréal family with links to the business and financial sectors, as well as the thriving amateur sports scene. In the late 18th century, Clouston’s great-grandfather arrived in Canada from Orkney, Scotland, through his work as an agent of the Hudson’s Bay Company. His grandfather, James Stewart Clouston, was chief factor at the Lachine post, while his uncle, Sir Edward Seaborne Clouston, and his father, William Stewart Clouston, both held positions with the Bank of Montreal. Sir Edward played in what many consider to be the first organized game of indoor hockey at the Victoria Skating Rink in Montréal on 3 March 1875. On his mother’s side of the family, her sister Edith Campbell served as matron (chief nurse) with the Canadian Army Medical Corps during the First World War and received the Military Medal and Royal Red Cross, among other honours.

Campbell Clouston grew up in Pointe-Claire and is believed to have attended Selwyn House School shortly after its founding in 1908. After graduating from Lower Canada College, he spent one year as an engineering student at McGill University in 1917–18. He then left Canada to enter the Royal Navy.

Clouston joined the Royal Navy in 1918 as a special entry cadet and in 1920 became a midshipman, thereafter progressing through the ranks to sub-lieutenant (1921), lieutenant (1922), lieutenant commander (1930) and commander (1934). Clouston served in various ships and postings throughout his career, including the Mediterranean, America and the West Indies, and the Atlantic fleet, as well as the Royal Naval Gunnery School at HMS Excellent in Portsmouth.

Senior officers described him as “zealous, keen” and with a “pleasing personality,” although one did note that he was “sometimes a little harsh with [the] men.” He was also athletic: Clouston “keeps fit” and “plays most games and is good at them”, Captain McKinnon noted in his service file. Historian Walter Lord provides a similar description in The Miracle of Dunkirk: “Clouston was a Canadian — big, tough, athletic, amusing. He was a fine ice hockey player, and when stationed in Portsmouth, typically he had organized the staff into a hockey team.”

In 1935, Clouston married a young woman from Berkshire, Gwyneth Lilian Vanderpump. In 1937, he became commanding officer of the destroyer HMS Isis. After sustaining damage during the Norwegian campaign, the Isis headed to the docks for repair, and Clouston was transferred first to Dover and then to the French port of Dunkirk [Dunkerque].

Beginning on 10 May 1940, German military forces began their invasion of the Low Countries (the Netherlands and Belgium) and northern France. On 14 May the Dutch army surrendered, while Belgian resistance collapsed on May 27. By this point, British, French and Belgian divisions had been forced to the coast, pursued by the quickly advancing Germans. Facing the potential loss of the British Expeditionary Force, as well as thousands of French and Belgian allies, the British government launched Operation Dynamo, a massive rescue operation of soldiers from Dunkirk. From 26 May to 4 June, about 198,000 British troops were evacuated, along with 140,000 French and Belgian soldiers. In addition to naval vessels, around 700 civilian boats (including yachts and fishing boats) were employed to transport the men, making multiple trips across the English Channel while under fire by enemy aircraft.

DID YOU KNOW?
Humans weren’t the only passengers on board the rescue ships from Dunkirk. It is estimated that at least 170 dogs were evacuated as well.


Admiral Bertram Ramsay, based in Dover, England, was in overall command of Operation Dynamo. At Dunkirk itself, Captain William Tennant, Royal Navy, was in charge of the evacuation. Tennant was appointed Senior Naval Officer at Dunkirk on 26 May and left Dover the following day with a staff of 12 officers and 160 seamen, among them Clouston. The men travelled aboard the destroyer Wolfhound, which was dive-bombed by German Stukas as it crossed the Channel. Tennant briefed his staff on board, assigning Clouston the responsibility of maintaining liaison with the evacuation fleet and organizing the loading and departure of the ships. They arrived at around 7:00 p.m. to find Dunkirk in flames, under attack by enemy aircraft. 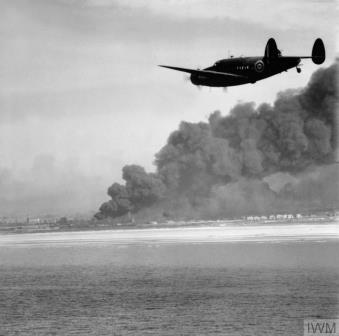 A Lockheed Hudson of No. 220 Squadron RAF approaches Dunkirk on a reconnaissance patrol during the evacuation of the British Expeditionary Force from the port in May-June 1940 (Operation Dynamo).

Since German bombers had destroyed much of the harbour, the British had to find another way to quickly embark thousands of troops. Ships were ordered to wait offshore, while small boats evacuated troops from the beaches. However, this was a slow and cumbersome process. Later that evening, they decided to test the eastern breakwater or mole (which was about 1.6 km long) as a makeshift pier. After both the St. Seiriol and the Queen of the Channel successfully embarked hundreds of men from the pier, it was decided to use this as the main loading zone. Troops would continue to be lifted from the beaches as well. 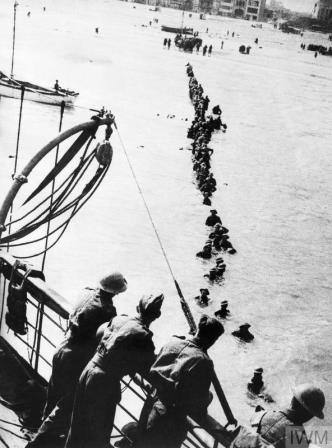 British soldiers wade out to a waiting destroyer off Dunkirk during Operation Dynamo.

Coordinating thousands of troops and hundreds of ships required exceptional organizational abilities and a cool head. Clouston, who had been appointed pier master, faced disorganized, disheartened and sometimes disorderly troops, enemy fire, and a steady stream of ships and boats at the makeshift pier. From 27 May to 2 June, he oversaw the evacuation of nearly 200,000 men from Dunkirk — more than four times the original estimate for the entire operation. 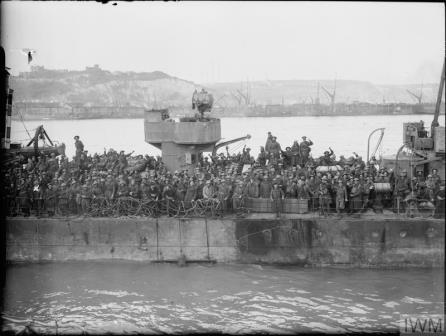 British troops crowd the deck of a Royal Navy destroyer at Dover, 31 May 1940.

On the morning of 2 June 1940, after overseeing the evacuation for six days and nights with very little rest, Clouston left Dunkirk to attend a conference in Dover with Admiral Ramsay, head of Operation Dynamo. Clouston was returning from Dover that evening when his boat, RAF Seaplane Tender No. 243, was attacked by German aircraft near Gravelines, not far from Dunkirk. After the survivors took to the water, the crew of nearby RAF Seaplane Tender No. 276 tried to rescue them, but since they were still under fire themselves, Clouston waved them off and ordered them to proceed to Dunkirk. Only two men from No. 243 survived. The others, including Clouston, perished.

According to documents held by the Commonwealth War Graves Commission, Clouston’s body was found on 3 June and he was buried at Cuxhaven in Germany. The circumstances of his discovery and burial are a mystery. Following the Second World War, in December 1946, his body was reburied at Becklingen War Cemetery in Niedersachsen, Germany.

Clouston left behind a young son, Dane, as well as his wife, Gwyneth, who was pregnant with their second son, Moray. In July 1940, Clouston was posthumously awarded a Mention in Despatches (MID) in recognition of his service and bravery.

By 4 June, the final day of Operation Dynamo, nearly 240,000 had been evacuated from the harbour. Combined with the numbers evacuated from the beaches, around 340,000 British, French and Belgian troops were saved. The success of the operation ensured that Britain could continue its fight against Hitler’s Germany.

In his books, Dunkirk (1945) and The Nine Days of Dunkirk (1959), author David Divine — who took part in Operation Dynamo — referred to Clouston’s death as one of the “great tragedies of Dunkirk.”

Commander Clouston was responsible for the traffic of the Mole from the beginning of the operation. Under his guidance 200,000 men had passed down its narrow plankway to safety. It is impossible to exaggerate the importance of his achievement. It was carried out under conditions that could have been surmounted only by a strong spirit. Darkness, wind, sea, enemy shellfire, and incessant bombing conspired always against those who tried to control the traffic of the Mole. The plankway itself was wrecked by direct hits. The loading berths were blocked by sunken ships. The flow of troops was irregular, and the difficulties of dealing with men unaccustomed to the sea and heavy with the exhaustion of defeat were indescribable. Throughout it all Commander Clouston maintained the very highest traditions of the Royal Navy. His service to the BEF and to his country is not to be measured in words.


Clouston also received high praise from John Masefield, in The Nine Days Wonder (1941): “Commander Clouston had been of the utmost service in helping the escape of nearly two hundred thousand men under frightful conditions of strain and danger. It was a grief to many that he did not live to see the lifting brought to an end.” Similarly, Walter Lord credited Clouston’s organizing ability for the evacuation of “far more men…from the mole than anyone had dared hope.” The 1990 CBC documentary We Shall Fight on the Beaches! includes a long segment about Clouston, including interviews with his family and with veterans who remembered him as pier master.

Interest in Clouston was revived in 2017 with the release of Christopher Nolan’s film Dunkirk, featuring Kenneth Branagh as pier master Commander Bolton. Members of Clouston’s family expressed their disappointment that his role and name were fictionalized and that he wasn’t recognized in the credits. The filmmakers maintained that Commander Bolton’s character was a “composite” character, informed by the stories of a number of individuals, and that all characters in the film had been fictionalized. Yet despite the fact that Clouston is not mentioned in the film, Dunkirk revived interest in his story in Canada and overseas, leading to the dedication of a commemorative plaque on the shores of Lac St-Louis in Lachine, Montréal, in September 2017.

Our thanks to Jeffrey Street for his advice and assistance.