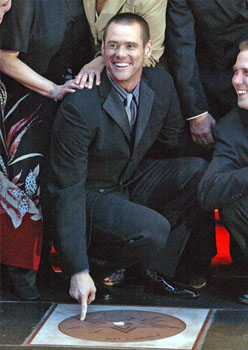 James Eugene Carrey,"Jim," actor (born at Newmarket, Ont 17 Jan 1962). Jim Carrey, perhaps the most successful of the Canadian comic actors who have gone to Hollywood and made good, left a heavy imprint on American film comedy in the 1990s. His almost frighteningly manic attack, his gymnastically rubber face and his boundless appetite for excess go well beyond the limits of his predecessors. His characters swing wildly between the poles of monstrously fatuous pride and hysterical self-abasement, between sadistic megalomania and masochistic abjection.

Jim Carrey has been compared to Jerry Lewis in his willingness - even eagerness - to embarrass himself and others and to enact a manic-depressive crisis of self-worth in hyperkinetic comic terms. It is doubly ironic and appropriately incongruous that Carrey's uncontained and infantile spasms are performed by a body that is tall, muscular and even physically heroic (which can pass unnoticed, so powerful is the actor's will to the grotesque). His appetite for extremes of plasticity has led him (and in this he is in tune with the times) to the action cinema of fantasy and special effects, where his innate immoderation can be enhanced through animation, stunts and other cinematic tricks - most clearly seen in The Mask (1994).

After dropping out of high school to help his family at a time of financial crisis, he turned a childhood appetite for performance into a career as a teenage standup comic at the Yuk Yuk's club in Toronto. In 1981, when he was 19, Carrey moved permanently to Los Angeles and worked as a standup comedian (at the Comedy Store), in series television - The Duck Factory (1984) and In Living Color (1990-94) - and in movie bit parts. In 1994 his career exploded with starring appearances in 3 hit movies: The Mask, Dumb and Dumber and Ace Ventura: Pet Detective. The following year came Batman Forever and Ace Ventura: When Nature Calls. Jim Carrey's arrival was so loud and sudden that within a single month in 1995 he was featured on the covers of both Newsweek and Rolling Stone. In 1996 he received a startling $20-million fee to star in The Cable Guy, which failed to be the surefire hit it was supposed to be and drew comments that it was too "dark" to be funny. He followed this in 1997 with another typical Carrey film, Liar, Liar, and then played against type with the offbeat, popular and critical success The Truman Show (1998), in which he played a man gradually becoming aware that his whole life is displayed on a TV show watched by millions.

By this point in his career, Jim Carrey could choose his projects with complete freedom. After an acclaimed appearance as comedian Andy Kaufman in Man on the Moon (1999), and as a man with multiple personalities in the manic comedy Me, Myself and Irene (2000), came the sentimental neo-Capra epic The Majestic (2001). It was a critical and box-office failure; however, the release of Dr Seuss' How the Grinch Stole Christmas (2000), with Carrey in the central role of the Grinch, grossed over $260 million, making it the biggest hit of his career to date.

The Grinch was followed by Bruce Almighty (2003), the critically acclaimed Eternal Sunshine of the Spotless Mind (2004), Lemony Snicket's A Series of Unfortunate Events (2004), Fun with Dick and Jane (2005), and the thriller The Number 23 (2007). Carrey starred in Yes Man (2008) in a typically manic role (a variation on Liar, Liar) and then, in a change of pace, portrayed a gay character in love with a fellow prison inmate played by Ewan McGregor in the comedy-drama I Love You, Phillip Morris (2010). Due to its "difficult" subject matter, the film was held back from distribution, and when it was released it "only" made $20 million, another rare box-office failure for Carrey. The critics were not kind to the animated A Christmas Carol (2009), in which he played Scrooge and all 3 ghosts in a motion-capture suit, or to Mr. Popper's Penguins (2011), where Carrey mugged along with live and computer-generated penguins.

Jim Carrey has won numerous Golden Globes and MTV Movie Awards (the most by any celebrity in MTV history) and was inducted into Canada's Walk of Fame in 1998. With an accumulative box-office gross in excess of $2 billion, he is without doubt the most powerful and influential Canadian-born actor working in Hollywood since Mary PICKFORD's reign as queen of the American cinema during the 1920s.