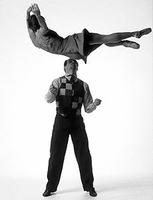 Kudelka is acknowledged internationally as the leading Canadian ballet choreographer of his generation.\r\n(photo by Cylla von Tiedemann/courtesy National Ballet of Canada).
PreviousNext

James Kudelka, choreographer, dancer, director (b at Newmarket, Ont 10 Sept 1955). James Kudelka is acknowledged internationally as the leading Canadian ballet choreographer of his generation, He has evolved a unique style that draws from both classical ballet and modern dance to produce works of unusual technical inventiveness and emotional power. Kudelka's musical tastes are exceptionally wide-ranging, from pop to classical - The Beatles to Bartok. He has also commissioned several original scores. He is rare among contemporary choreographers in taking on major symphonic compositions, such as Beethoven's Symphony No. 6 for Pastorale (NATIONAL BALLET OF CANADA, 1990). Kudelka is adept at choreographing complex ensemble dances and highly original and expressive solos and duets, such as Fifteen Heterosexual Duets (TORONTO DANCE THEATRE, 1991). Although his choreography is often lyrical and poetic, it can be starkly visceral and percussive. Even when not choreographed in an overtly narrative mode, his works are animated at a human level by strong, psychological undertones. Kudelka has shown a fascination with themes of love and loss, sex and death. He has tackled such difficult subjects as sexual and family dysfunction in The Miraculous Mandarin (1993) and Spring Awakening (1994), both for the National Ballet of Canada.

Kudelka began choreographing while a student at the NATIONAL BALLET SCHOOL and continued while performing as an accomplished member of the National Ballet of Canada. He won serious critical attention for such overtly dramatic ballets as A Party (1976) and his first fully narrative ballet, Washington Square (1979). Seemingly disgruntled by what he claimed was a lack of creative commitment at the National Ballet, Kudelka joined LES GRANDS BALLETS CANADIENS in 1981. There his choreography shifted toward a less overtly dramatic style in such acclaimed works as In Paradisum (1983) and Alliances (1984).

He was resident choreographer of Les Grands Ballets from 1984 to 1990, and contributed regularly to its repertoire while also creating works for other companies in Canada and abroad, such as DANCEMAKERS, LES BALLETS JAZZ DE MONTRÉAL, MONTRÉAL DANSE, the Joffrey Ballet, the San Francisco Ballet and the American Ballet Theatre. Kudelka returned to the National Ballet of Canada as artist in residence in 1992 and continued to create works for it and other companies. He undertook his first reworking of a major Russian classic, The Nutcracker, for the National Ballet in 1995. The production's success doubtless influenced the decision in 1996 to appoint Kudelka as artistic director after the unexpected resignation of Reid ANDERSON.

Anderson's departure had been prompted by his frustration with government funding cuts. Kudelka inherited a company with much diminished resources. Financial constraints forced him to reduce the roster of dancers. Nevertheless, he embraced the challenge of sustaining the company through difficult times and placed an emphasis on creative vitality. He made it his goal to rethink the nature of what a traditional classical ballet repertory company should be in the 21st century. Kudelka commissioned works from such company alumni as Dominique Dumais and Matjash Mrozewski and from renowned Montréal modernist Jean-Pierre PERREAULT. He also continued to contribute to the company repertoire with new works and others, such as Cruel World, Terra Firma, and There, below, previously created for other companies. Among the most successful of the original works were new versions of the full-length Swan Lake (1999) and Cinderella (2004), a popular hit that was quickly acquired by Boston Ballet and American Ballet Theatre. His settings of Vivaldi's The Four Seasons (1997) and Stravinsky's The Firebird (2000) were both subsequently filmed for television. The Actress (1994), created as a vehicle for the mature talent of ballerina Karen KAIN, was widely seen across Canada during the famous ballerina's 1997 farewell tour. Kudelka experimented with traditional narrative ballet modes in his unusual and controversial The Contract (2002), an interpretation of the Pied Piper story, and in his full-length adaptation of the 19th-century French farce, An Italian Straw Hat (2005).

Kudelka also acquired existing masterworks from the international catalogue, notably several by the great 20th-century choreographer George Balanchine. Despite financial constraints, Kudelka was eager to present the National Ballet to foreign audiences. In October 1998 Kudelka took his company on a critically acclaimed tour to New York, its first visit to such a major dance capital in almost a decade, and, as part of a United States tour, returned there in 2004.

Kudelka made no secret of his distaste for many of the administrative and public relations aspects of his role as artistic director and in May 2005, after serving longer in the post than anyone since National Ballet founder Celia FRANCA, resigned. He was immediately named the company's resident choreographer and continues to create works for the National Ballet and other leading companies across North America. For example, in 2008 he was named resident choreographer for the contemporary dance company Coleman Lemieux & Compagnie, which performs both existing and new works.

Kudelka was appointed an officer of the ORDER OF CANADA in 2005.