Naismith invented the game of basketball while working as an instructor at the YMCA International Training School in Springfield, Mass (courtesy Library and Archives Canada/C-80002).

James Naismith was the eldest son of Scottish immigrants Margaret and John Naismith. Margaret (née Young) was part of a large family that moved to Canada in 1852 and settled in Ramsay Township, Lanark County. A year later, 18-year-old John Naismith left his parents in Scotland and immigrated to the same county.

James Naismith was born on 6 November 1861 in Ramsay Township near Almonte, Ontario, a mill town in the Ottawa Valley, where he attended grade school. In 1870, his parents died of typhoid fever. Naismith, along with his older sister, Anne, and younger brother, Robbie, moved to live with their uncle, Peter Young, in nearby Bennie’s Corners.

Naismith spent the bulk of his free time outdoors playing games with friends, developing a passion for sports and physical activity. A popular game he often played was called “duck on a rock.” He and his friends would gather near a large stone at the blacksmith’s yard near the one-room schoolhouse they attended. A rock — called “the duck” — was placed on the stone while one person acted as a guard. The others stood 10–15 feet away, trying to displace it from its perch by hurling rocks of their own. It wasn’t long before the kids realized that trying to throw the rock directly past the guard like a baseball wasn’t effective. Instead, they began lobbing it high in the air, arcing over the guard. The rules of the game — and the development of the lob shot — stuck with Naismith and later became the basis of basketball.

Naismith attended Almonte High School beginning in 1875 but struggled to get good grades and left after just two years, Instead, he chose to work on the Young family farm in the summers and spend his winters at a logging camp. He returned to high school four years later, in 1881, and completed his high school equivalency by the spring of 1883.

In the fall of 1883, the 21-year-old Naismith enrolled at McGill University in Montreal, where he studied philosophy and Hebrew and graduated with a Bachelor of Arts in 1887. He was a standout multisport athlete at McGill, competing in lacrosse, football, rugby, soccer and gymnastics. In 1885–86 he was the gymnastics champion of his junior class. The following year, he won the Wicksteed gold medal, awarded to the top athlete of the graduating class. He was also a starter on McGill’s football team for three consecutive seasons. 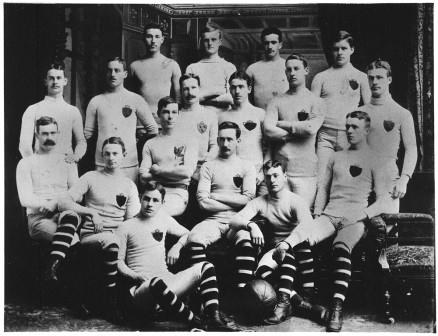 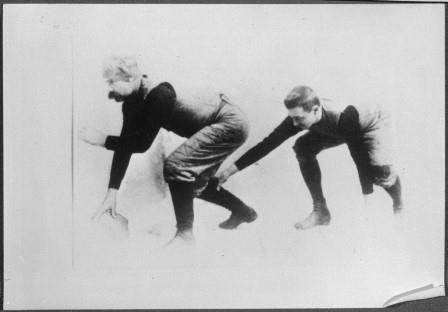 Naismith went on to study theology at nearby Presbyterian College and earned money to pay for his tuition by teaching physical education at McGill, becoming the school’s first full-time athletics instructor in the fall of 1889. He earned a diploma in theology in 1890.

He decided, however, that he could have a greater influence through sports than through traditional ministry. That year, he decided to leave Montréal to train as a YMCA Physical Director at the International YMCA Training School in Springfield, Massachusetts. In 1891, he became an instructor at the school.

Sport played a large role at the YMCA training school (later named Springfield College), with students and faculty participating in outdoor sports like football, soccer and lacrosse. Searching for a way to utilize the school’s gymnasium during the winter months, physical education director Dr. Luther Gulick tasked Naismith with establishing a game that could be played indoors. His only instructions were to “make it fair for all players, and free of rough play.”

Using “duck on a rock” — the game from his childhood — as inspiration, Naismith devised a game in which participants scored by throwing a soccer ball into a box guarded by an opposing team. (Naismith asked the building’s superintendent, Pop Stebbins, if he had two spare boxes, but all Stebbins could offer were two peach baskets.) He soon realized that because of the gymnasium’s tight confines, players could easily crowd in front of the box, making it difficult to score, so he decided the box would be placed above the players’ heads. Like “duck on a rock”, the ball would be have to be thrown in an arcing motion in order to score.

On 21 December 1891, the first game of basketball was played at Springfield College. Naismith fastened the baskets on ten-foot balconies at opposite ends of the gym, posted the rules on a nearby wall and waited in anticipation.

“I busied myself arranging the apparatus, all the time watching the boys as they arrived to observe their attitude that day," Naismith wrote in his journal. "I felt this was a crucial moment in my life as it meant success or failure of my attempt to hold the interest of the class and devise a new game.”

He split the group into two teams of nine. The first game, Naismith recalled, was very rough. “Well, I didn’t have enough [rules] and that’s where I made my big mistake,” he said in a 1939 radio interview. “The boys began tackling, kicking and punching in the clinches. They ended up in a free-for-all in the middle of the gym floor. Before I could pull them apart, one boy was knocked out, several of them had black eyes and one had a dislocated shoulder.” In response, Naismith introduced a rule that players couldn’t run with the ball, which helped to eliminate the violence from the game.

He settled on 13 rules for his sport, which he named Basket Ball. On 15 January 1892, Naismith’s 13 rules were made public when they were printed in the Springfield College school newspaper, The Triangle. 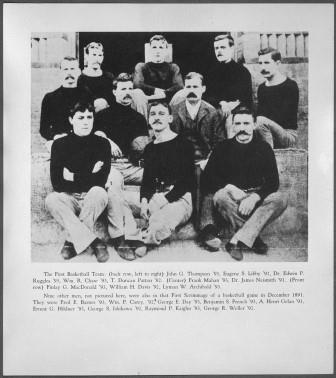 As basketball gained popularity at Springfield College, many of the students took the sport with them when they became instructors at other YMCA institutions, introducing it to new regions in North America. So did Naismith.

On 20 June 1894, he married Maude Sherman in Springfield. The following year they moved to Denver, Colorado, where Naismith was hired as the physical education director at the local YMCA while pursuing a medical degree at the Gross Medical School at Colorado University.

In 1898, he graduated from medical school and accepted the positions of associate professor of physical culture and chapel director at the University of Kansas. That same year, he founded the university’s men’s basketball program, which as of 2017 has accumulated more victories than any other college program in the United States, except the University of Kentucky. Naismith compiled a 55–60 coaching record at Kansas before handing head coaching duties to former student Forrest “Phog” Allen in 1907. Ironically, Naismith is the only coach in Kansas history without a winning record.

In 1916, Naismith volunteered as a chaplain for the Kansas Army National Guard and served with the First Kansas Infantry. From July to October the regiment patrolled the national border with Mexico, following a raid by revolutionary Pancho Villa earlier in the year. In this role Naismith organized sports leagues, held religious services and counselled soldiers in need. When the United States entered the First World War in April 1917, he again volunteered his services as chaplain, this time through the YMCA. In September 1917 he was sent by the YMCA to France as an “overseas secretary” tasked with improving the social hygiene of American troops. He spent 19 months based in Paris, returning to Kansas in March 1919.

Naismith returned to the University of Kansas, where he added campus physician and director of athletics to his resume before retiring in 1937 at the age of 76. He died on 28 November 1939 at his home in Lawrence, Kansas. By that time, basketball had spread across North America and had made its debut at the Olympics.

Basketball had grown quickly since its invention by Naismith in 1891. The first collegiate basketball game was likely played in 1895 at Hamline University in St. Paul, Minnesota, between the Hamline Pipers and the University of Minnesota’s School of Agriculture. By 1900, the sport was being played in YMCAs and YWCAs and in clubs and schools across the United States and Canada. The game grew internationally and was a demonstration sport at the 1904 Olympic Games in St. Louis. It made its debut as a medal sport at the 1936 Olympics, a point of pride for Naismith, who was in attendance for the first match and threw the ball for the opening tip-off. (The United States won the first Olympic gold medal in men’s basketball, while Canada took silver.)

Today, basketball is the most commonly played sport on campuses across the United States. A 2013 government report named it the sixth most popular sport among Canadians and fourth most popular sport among Canadian children between the ages of five and 14. In 2007, Fédération internationale de basket (FIBA), basketball’s international governing body, estimated that globally, more than 450 million people play the game.

In 1959, the Naismith Memorial Basketball Hall of Fame was established on the campus of Springfield College. Naismith himself was part of the inaugural hall of fame class that year for his contributions to the sport. In 2002, a new state-of-the-art building was constructed nearby and continues to attract fans from around the world.

Naismith has been commemorated with two bronze statues, one in his hometown of Almonte, Ontario (unveiled in 2011) and the other at the University of Kansas campus (installed in 2016).

On 10 December 2010, Naismith’s original hand-written rules were put up for auction by the Naismith International Basketball Foundation and fetched $4.3 million, a record price for sports memorabilia. The documents were purchased by American businessman David Booth, a native of Lawrence, Kansas, who donated them to the University of Kansas, where they are currently displayed. Profits from the sale went to support the Naismith International Basketball Foundation. 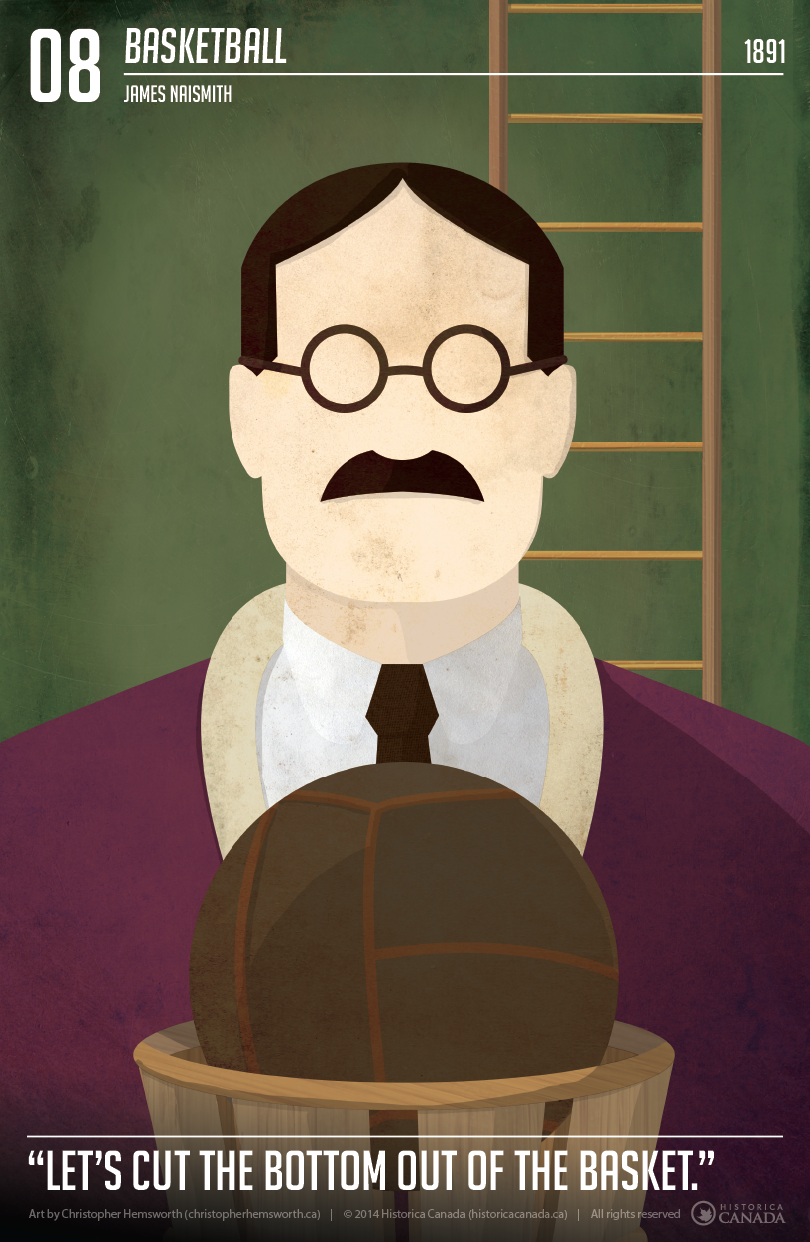 A portrait of James Naismith by graphic designer Christopher Hemsworth, based on Historica Canada's Heritage Minutes.