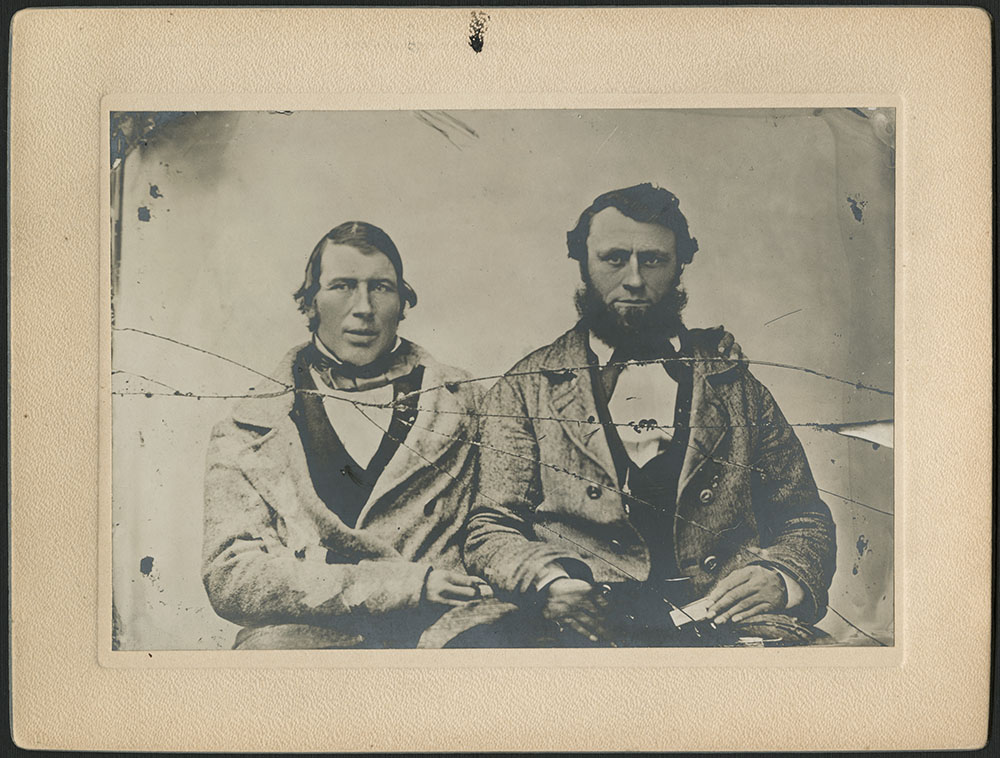 Jean-Louis Riel was the son of voyageur Jean-Baptiste Riel and a French Canadian-Chipewyan woman, Marguerite Boucher. Raised Catholic, Riel was baptized on 23 September 1822 in Berthier-en-Haut (Berthierville, Quebec), after his family returned to Lower Canada from the West. He attended school in Berthier, before learning the trade of wool carding.

Riel was present in Lower Canada during the Rebellions of 1837, then returned to the West in 1838 at age 21. There, he worked at the Hudson’s Bay Company (HBC) trading post in Rainy River for three years, before returning to Lower Canada.

Life in the Red River Colony

In 1841 or 1842, Riel attempted to carry out a novitiate (probationary period in a religious order) with the Oblates of Mary Immaculate at Saint-Hilaire. For unknown reasons, he withdrew his candidacy and returned to the northwest. In the summer of 1843, Riel settled in the Red River colony.

Living on a river lot in Saint-Boniface, Riel married Julie Lagimodière in 1843 or 1844. Julie was the daughter of voyageur Jean-Baptiste Lagimodière and Marie-Anne Gaboury, who had lived near Jean-Louis Riel. Julie had felt torn between choosing a religious vocation and marrying Riel, but her parents favoured the match. The couple had 11 children. Julie’s intense religious spirit greatly influenced not only their eldest son Louis, but their daughter Sara, who became a Métis Grey Nun and missionary.

In 1847, Jean-Louis Riel opened a small mill on his Red River farm, supported by HBC Chief Factor John Ballenden. He planned to establish a fulling mill operation to clean and thicken cloth, but had little success. His attempt to open and operate a carding and grist mill, which earned him the title “miller of the Seine,” also had little success. In 1857, hoping to establish a textile industry in the settlement, Jean-Louis Riel went to Montreal to buy machinery for a mill. After he returned with the equipment, this venture failed like the others.

Since 1821, the practice of free trade in furs had persisted in the Red River valley. However, many free traders were frustrated and constrained by the HBC’s monopoly over the fur trade. On 17 May 1849, Jean-Louis Riel played a decisive role in the trial of Pierre-Guillaume Sayer, one of four Métis fur traders accused by the HBC of illegal trading.

Along with Reverend George-Antoine Bellecourt, Riel led 400–500 armed Métis to the courthouse, where they assembled outside. They disrupted the proceedings, advising the Métis to support Sayer and his lawyer James Sinclair, who represented Red River’s free traders. In addition to organizing the Métis to protest against the HBC monopoly, Riel and Bellecourt also protested the Council of Assiniboia’s lack of Métis representation.

Sayer admitted to illegally selling furs, but justified his actions, claiming that the transaction was a gift exchange between relatives. This type of exchange, he argued, was a legitimate and common practice of trading amongst Indigenous peoples.

A jury of seven English speakers and five French speakers found Sayer guilty. However, the jury recommended mercy since he had genuinely believed that the Métis were allowed to trade freely. HBC Chief Factor John Ballenden asked for no punishment for Sayer and withdrew charges against the three other Métis traders accused by the HBC of illegal trading.

Once Sayer was freed, Riel promptly asserted that this verdict meant the end of the HBC monopoly. He was correct: the court’s decision brought free trade back to the Red River.

Shortly after Jean-Louis Riel died in 1864, the Riel family established their Winnipeg home at the location of today’s restored Riel House National Historic Site. Jean-Louis Riel was a brilliant orator and a pious and courageous man motivated by a keen sense of justice. Through his activism and quest for greater Métis power, he had a profound influence on his son Louis Riel (1844–1885), the future Métis leader. He remained a constant source of inspiration for Louis, even after his death. Louis named his son Jean, born in 1882, after his father.