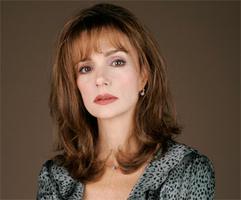 Jennifer Dale née Ciurluini, actor (born at Toronto 16 Jan 1956). Jennifer Dale completed her early education in Etobicoke before her theatre training (1974-77) in Montréal at the National Theatre School (NTS). In her third year at the NTS, she did a month-long workshop in a class of 8 (under Robin PHILLIPS's leadership) in Stratford at the end of the festival's 1976 season. It was Phillips who exposed her habits and mannerisms and taught her that your very thoughts could register on stage if they were clear and focused.

After graduating from the NTS, Jennifer Dale was invited by Phillips to understudy Marti Maraden as Juliet (opposite Richard MONETTE's Romeo) and Martha HENRY as Beatrice (opposite Alan Scarfe's Benedick). She played Hero in Much Ado About Nothing and Ann Page in The Merry Wives of Windsor, but her Stratford experience was short-lived. More substantial roles were as Shakespeare's Cressida opposite Benedict Campbell's Troilus in a production directed by John Wood for the National Arts Centre, and Schiller's Mary Stuart (under Brenda Bazinet's direction) for The Actors Repertory in Toronto. Graced by her physical beauty, her later stage work has been especially remarkable for its vocal clarity, emotional resonance, and psychological depth - particularly in her one-woman show Duse (an English adaptation of Ghigo de Chiara's Italian piece, Eleonora's Last Night in Pittsburgh) and The Woman I Am (a portrait of feminist poet Dorothy LIVESAY) that began as a radio play for the CBC before its incarnation on stage as part of Andrew Burashko's Art of Time Ensemble at the Du Maurier Theatre (now the Enwave).

Jennifer Dale has had a television and film career that has allowed her to play a larger range of roles than in her stage career. The lead role in her first film, Suzanne, earned her a 1981 GENIE Award nomination for best actress, and she went on to play everything from a banshee (The Banshee, with Peter O'Toole) to an actress (Family of Friends), a virtual dominatrix (Once A Thief), a hooker, a country and western singer (E.N.G.), a doctor (Side Effects), a long-suffering wife, and Betsy Bigley (notorious con woman in the television movies Love and Larceny and Grand Larceny). A series lead in Once a Thief, Live Through This and Rumours, Dale also played guest roles on numerous other series such as Empire, Inc. and Vanderberg, and voiced the character of Mystique in 5 episodes of the animated X-Men. Her film credits include Whale Music, The Adjuster, Cadillac Girls, Love Come Down, Killer's Freedom and Gravy Train. In 2004 she co-produced and hosted a 6-part series, Actor's Notes, in which she interviewed several of Canada's most accomplished actors. She made guest appearances in several episodes of the TV series Men with Brooms in 2010.

Though never given the sort of material that would make her an international star, Jennifer Dale is a respected actress who has earned an ACTRA nomination for Love and Larceny and GEMINI nominations for appearances on Night Heat, Saying Goodbye: Thunder in My Head, No Place Like Home, Grand Larceny and Revenge of the Land. In 1998 she received the Outstanding Achievement Award from Women in Film and Television Toronto, and in 2003 she was given the EARLE GREY AWARD from the Academy of Canadian Film and Television.

Jennifer Dale is the sister of Cynthia Dale, who is also a well-known face on Canadian stage and screen.