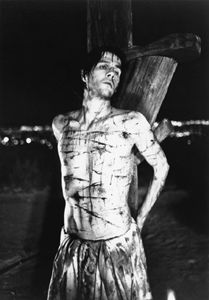 The seed for the idea of Jésus de Montréal was planted during the making of Arcand’s previous film, Le déclin de l’empire américain. An actor who auditioned for a part in the film explained to Arcand that he had a full beard because he was playing Jesus in a production of the Passion Play, while also auditioning for commercials during the day. Arcand was struck by the contrast, and after finishing Le déclin he began writing a screenplay that explored the contradiction between spirituality and commercialism. “Consumerism may be the legacy of the eighties,” Arcand explained, “but there has got to be more to life than that. Jesus of Montréal is about a yearning for something else, a search for a sort of meaning."

Denys Arcand began as a documentary filmmaker and later moved to fiction. His films are among the most highly acclaimed of all Canadian filmmakers.

Discouraged by waning public interest, theatre-loving Father Leclerc (Gilles Pelletier) decides to commission a more engaging and modernized version of the Passion Play for his church’s annual production. He hires an androgynously ethereal young actor named Daniel (Lothaire Bluteau), who conscripts an unlikely troupe of thespians (or disciples, as the allegory would have it) to bring the play to life. Martin (Rémy Girard) is working as a voice actor for porn movies; Constance (Johanne-Marie Tremblay) is having an affair with Father Leclerc; Mireille (Catherine Wilkening) stars in commercials that use her scantily-clad body to sell cosmetics; and René (Robert Lepage) is an eccentric actor who is determined to shoehorn Hamlet’s soliloquy into the production.

Their avant-garde performance, which makes use of Mount Royal as an outdoor theatre, incorporates new archaeological evidence and biblical translations, and presents literal interpretations of many of Christ’s teachings. The play dazzles the audience but offends Leclerc. As the Catholic Church attempts to shut it down, the parallels between Daniel’s actions and the life of Christ become increasingly direct, culminating in his outburst at one of Mireille’s auditions that mirrors Christ’s anger among the money-lenders. When he is fatally injured in the final performance, Daniel is taken to a local hospital and laid crucifixion-style on an operating table, where his organs are taken to literally give sight to the blind and health to the sick.

Jésus de Montréal has the audacity to take institutional religion and spiritual questing seriously and still call itself a comedy. The device of history as a play within a film permits Denys Arcand to move seamlessly from one line of narrative continuity to another, so that eventually the film moves towards a unifying and credible answer to the implicit question: what would Jesus look like if he walked among us today?

Daniel (Bluteau) becomes so identified with the character of Jesus that the line between ancient narrative and the contemporary life in which he is deeply immersed becomes deliberately blurred. Daniel rails against crass corporate culture like Christ among the money-changers, cultivates a sublime asceticism and ultimately transforms the material world through his struggle and suffering. So it is that we see how life among troubled and searching actors in modern-day Montréal might be marked by halo-traces of a time-honoured story of death and rebirth. Jesus de Montréal is a brilliantly witty allegory for a commercial age in which doubt is not merely conceived as an antithesis to faith; it is the permanent fact of our postmodern condition.

The movie received generally positive reviews upon its commercial release. The New York Times called it “intelligent and audacious,” and Rolling Stone’s Peter Travers said it was “a sharply perceptive satire of modern Christianity.” The Guardian called it “thought-provoking and wickedly funny,” while Time Out deemed it a “delicious satire on contemporary mores… a witty, free-wheeling variation on the Gospel of St Mark [that] is never constrained by allegorical schematism and manages to make deft, original swipes at a plethora of modern 'evils': media hype, advertising, hospital bureaucracy, and of course the hypocrisy of the religious establishment.”

Jésus de Montréal is widely considered one of the best Canadian films ever made. It won two major prizes at the Cannes Film Festival and 12 Genie Awards, including best screenplay, director, actor and motion picture. It also won the Golden Reel Award as the highest-grossing Canadian film of the year and received nominations for Best Foreign Language Film at the Academy Awards, BAFTA Awards and Golden Globes. It was ranked in the top five in polls of the Top 10 Canadian films of all time conducted by the Toronto International Film Festival in 1993, 2004 and 2015, and No. 2 in a similar Playback readers’ poll in 2002.

In 2014, a restored print of the film had a special 25th anniversary screening in Paris. In 2016, it was named one of 150 essential works in Canadian cinema history by a poll of 200 media professionals conducted by TIFF, Library and Archives Canada, the Cinémathèque québécoise and The Cinematheque in Vancouver in anticipation of the Canada 150 celebrations in 2017.

Performance by an Actor in a Supporting Role (Rémy Girard)

Performance by an Actor in a Leading Role (Lothaire Bluteau)