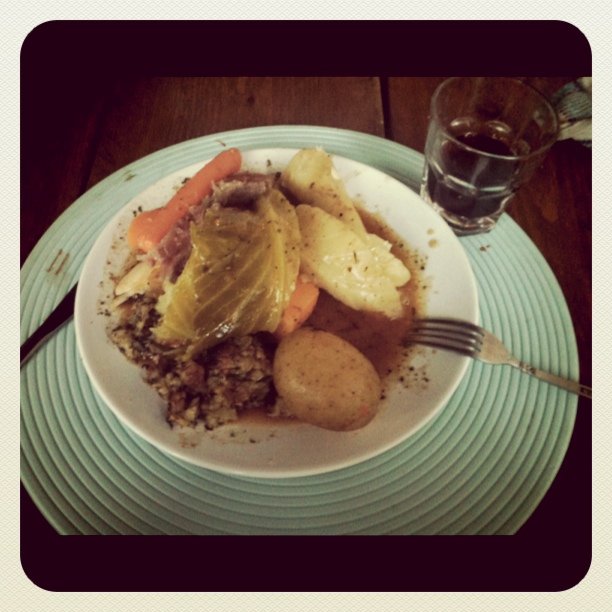 Jiggs' dinner is a staple of outport (rural) Newfoundland cuisine. It is also called boiled, cooked or Sunday dinner, as it is usually served on Sunday. Most traditional recipes will be for servings for large groups of people, as large families and gatherings were the custom in pre-modernized Newfoundland.

A large portion of Jiggs was also meant to yield plenty of leftovers, which is commonly called “hash.” It is mixed together and fried in a pan with whatever can be found in the fridge. Hash with fried bologna on Mondays is very popular.

“Jiggs” is a reference to the protagonist of George McManus's comic strip Bringing Up Father. Jiggs was an Irish immigrant living in America who regularly ate corned beef and cabbage, a precursor to the Newfoundland dish. Much of the settlement in Newfoundland came from Irish immigration, so it is not surprising that so much of the food and culture has Celtic ancestry.

Like New England boiled dinner, Jiggs is a colloquial twist on traditional Irish cuisine. Jiggs is distinguished by its use of salt meat, typically trimmed naval beef or short ribs (not to be confused with spare ribs or riblets, which come from pork). The short ribs are less fatty. The use of salt meat comes from the Newfoundland practice of pickling fresh meat to last for the winter. Salt meat is now available commercially.

A roasted turkey is often served with Jiggs, but it isn't necessary. Pickled beets and sweet mustard pickles are traditional Jiggs condiments. Gravy is considered modern, and Pease pudding is a popular side dish. Figgy duff (molasses steamed pudding) and dumplings are also used. 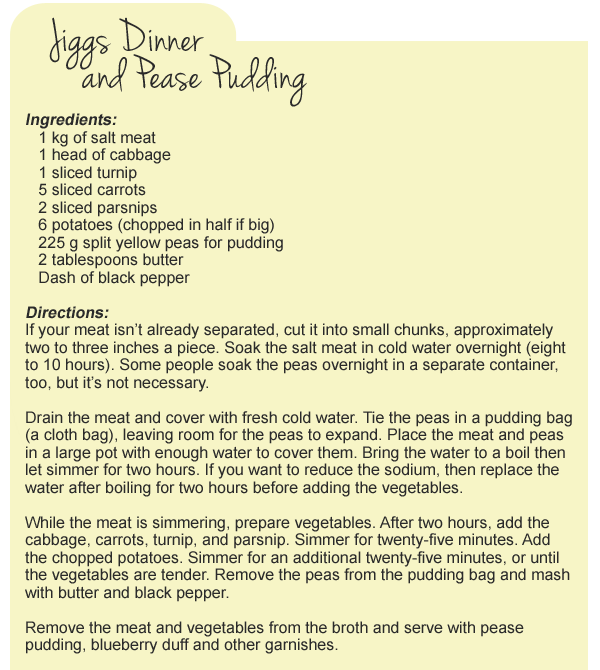