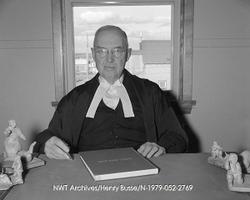 John Howard Sissons, "Jack," lawyer, judge (b at Orillia, Ont 14 July 1892; d at Edmonton 11 July 1969). As first judge of the Territorial Court of the Northwest Territories (est 1955), he took "justice to every man's door" by aircraft and dog sled. Sissons practised law in the Peace River country from 1921 and was Liberal MP for that area 1940-45. He was named a district court judge in southern Alberta in 1946 and was chief judge 1950-55. He travelled 64 000 km in a twice-yearly circuit, holding trials in remote communities. Several of his decisions relating to hunting rights and to native marriage and adoption practices became legal landmarks. His views were not always popular with the bureaucracy, but he became a legend to the area's Indigenous people and was called Ekoktoegee, "the one who listens to things," by the Inuit. He retired in 1966 and wrote his memoirs, Judge of the Far North (1968).