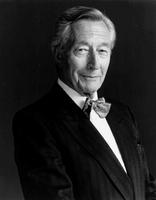 John Neville, actor, director, producer (born in Willesdon, London, Eng 2 May 1925, died at Toronto 19 Nov 2011). With an aristocratic, elegant stage presence and flexible, resonant voice, John Neville was one of the pre-eminent stage actors of his generation and, as a performer, director and artistic director, revived and invigorated theatres both in his native England and in Canada.

Neville trained at London's Royal Academy of Dramatic Arts and first appeared in a walk-on role in a 1947 production of Richard II at the New Theatre in London. During the early 1950s he established himself as one of the country's finest leading men, performing a range of Shakespearean and other classical roles, particularly during his six years at the Old Vic Theatre in London. It was here, in 1955-56, that he and Richard Burton gained worldwide attention by alternating the roles of Othello and Iago.

John Neville starred in the first season of Sir Laurence Olivier's Chichester Festival in 1962 and played the title role in Coriolanus, directed by Sir Tyrone , for the opening of the new Nottingham Playhouse in 1963. His many West End appearances included The School for Scandal, Once More with Feeling and Irma La Douce, and he created the memorable title role in the stage play Alfie. He served as artistic director of the Nottingham Playhouse and received the Order of the British Empire in 1965.

In 1956 Neville made his Broadway debut in Romeo and Juliet, and two years later toured the U.S. in Hamlet and as Sir Andrew Aguecheek in Twelfth Night. He came to Canada in 1971 in Lolita, a less-than-successful musical version of the Vladimir Nabokov novel, and returned in 1972 to direct The Rivals at Ottawa's NATIONAL ARTS CENTRE. He was offered the artistic directorship of Edmonton's CITADEL THEATRE, which he ran from 1973 to 1978. Neville took over the NEPTUNE THEATRE in Halifax from 1978 to 1983 and continued to prove himself an able administrator. He made a memorable appearance as Don Armado in the 1983 production of Love's Labour's Lost (revived in 1984) at the STRATFORD FESTIVAL.

Neville succeeded John HIRSCH as artistic director of the debt-laden Stratford Festival in 1985. With some astute programming, he gradually eliminated its large deficit while fostering the careers of actors such as Colm FEORE, Geraint Wyn Davies and Lucy Peacock. His programming was not without controversy, as some critics condemned the use of the mainstage Festival Theatre for popular, cash-generating musicals.

By the time John Neville left Stratford after the 1989 season, he had begun to move into film and television work. In 1988 he starred as the Baron in Terry Gilliam's cult classic The Adventures of Baron Munchausen and reached a substantial new audience during the 1990s with his recurring role as The Well-Manicured Man in the popular television series The X- Files.

Neville was a TV series regular on Peter Benchley's Amazon and in Emily of New Moon, and guest-starred in Queer as Folk, The Education Of Max Bickford and as Sir Isaac Newton in an episode of Star Trek: The Next Generation.

Among his many film credits are David CRONENBERG's thriller Spider, Eduardo Ponti's Between Strangers and lead roles in Billy Budd, Mr. Topaze and Oscar Wilde.

Stage appearances include the Earl of Warwick in Saint Joan on Broadway, Edgar in Strindberg's Dance of Death at the Almeida Theatre in London, Beethoven's Tenth at the Chichester Festival and the role of Krapp in Samuel Beckett's Krapp's Last Tape at Toronto's du Maurier World Stage festival in 2000. In 1999 he directed Strindberg's The Creditors, the inaugural production of the Actors Repertory Company of Toronto.

In 2004 he appeared in Norman JEWISON's film The Statement. He did voice work for the animated TV series Friends and Heroes (2007), and was the narrator for the short Dance of Death (2010).

He became a member of the ORDER OF CANADA in 2006. In his final years John Neville suffered from Alzheimer's disease.