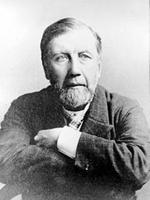 John Ross Robertson, newspaper publisher, philanthropist (b at Toronto 28 Dec 1841; d there 31 May 1918). He was the son of a Scottish-born merchant. After attending Toronto's Upper Canada College, where he published a student paper, he founded the evening Telegram, which became the voice of working-class, conservative, Orange Toronto. Known as "the old lady of Melinda Street," it was the bitter rival of the Liberal Toronto Star. Robertson was a Tory maverick whose keen interest in local history led him to compile and publish the several volumes of Landmarks of Toronto and Canada. His own notable collection of Canadiana was left to the Toronto Public Library. Toronto's Hospital for Sick Children also benefited enormously from his wealth. The Telegram was continued by his heirs until sold in the 1930s. It ceased publication in 1971.
×