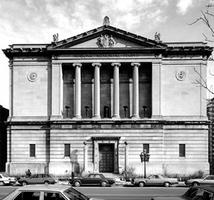 John Smith Archibald, architect (b at Inverness, Scot 14 Dec 1872; d at Montréal 2 Mar 1934). He came to Canada in 1893 and was employed as supervising architect in the office of Edward Maxwell in Montréal. From 1897 to 1915 he practised in partnership, and thereafter under his own name. He was known for his administrative ability and expertise in construction methods. He tried to promote economy in relation to architecture through a series of articles distributed across Canada. During the 1920s the CNR commissioned him to design large hotels across Canada from Halifax to Vancouver. In his best works in Montréal - Emmanuel Congregational Church, Montréal Technical School, Masonic Memorial Temple - Archibald adhered to the classical tradition of symmetry and monumental grandeur. He was president of the Royal Architectural Institute of Canada 1924-25 and was elected a fellow in 1930.