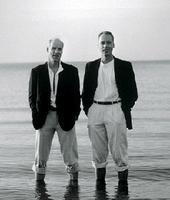 Joseph Beverly MacInnis, physician, diver, poet (b at Barrie, Ont 2 Mar 1937). After completing his medical degree at the University of Toronto (1962) and interning at Toronto General Hospital (1963), he lectured at the University of Pennsylvania (1964), but he has spent most of his career on underwater projects. He was the life-support physician for a man-in-sea project (1964), directed 75 dives at the Linde Research Laboratory (1965) and was a consultant to Sealab III (1967), to the TITANIC project (1985) and to the American Medical Association Journal (1966).

In 1969 MacInnis developed an underwater contained environment in Georgian Bay and then designed a transparent non-corrodible undersea refuge. In 1972 at Resolute this became, as one of 10 arctic underwater expeditions (1970-74), the first-named station under ice, including the first under the North Pole. MacInnis has participated in many diving expeditions, including a 700-foot dive (213 m) from the first lock-out submarine (1968), an arctic dive in which the BREADALBANE, a ship sunk in 1853, was discovered off Beechey Island (1980), and to the wreck of the Edmund Fitzgerald (1994).

His interest in merging arts with science has found expression in Underwater Images (1971), in which his own photographs of underwater life are accompanied by his poems, and in several films and television programs. A film, Deep Androsia, received a Gold Medal of Excellence at the International Film Festival, Santa Monica (1965). Many of his dives are documented in his book Underwater Man (1974). In August 1987 MacInnis joined the French team diving to investigate the wreckage of the Titanic. He later brought along an IMAX film crew to document the project and was co-executive producer of the IMAX movie Titanica. He is currently using multimedia to educate the public on the need to restore the health of the oceans and the Great Lakes. He is also the author of Titanic: In a New Light. He is president of his own consulting company, Undersea Research Ltd.