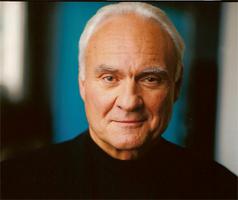 Actor Kenneth Walsh's success is a result of talent, training and perseverance (photo by Tim Leyes).

Kenneth Clifford Welsh, actor (born at Edmonton 30 March 1942). Kenneth Welsh's reputation as one of Canada's hardest-working actors is well earned, with more than 40 years of experience stretching from Stratford and Broadway to Canadian films and television and Hollywood blockbusters. Perhaps best known for his performance as Windom Earle in David Lynch's "Twin Peaks," his professionalism and journeyman philosophy have kept him steadily employed while his versatility and skill have brought him numerous awards and accolades.

Kenneth Welsh grew up in Edmonton and in high school was interested in drama. After studying under Gordon Peacock at the University of Alberta's Stanislavksy-oriented theatre program, he was accepted at the National Theatre School in Montréal, from which he graduated in 1965.

He spent the first 7 years of his professional career onstage at the Stratford Festival in Ontario, where at the age of 26 he played Hamlet. After taking part in Stratford's highly successful European tour in 1973, he left the company for stints at the famed Guthrie Theatre in Minneapolis and the Goodman Theatre in Chicago, where he received the Joseph Jefferson best actor award in 1977. He then made his Broadway debut in The Inspector General in 1978.

Kenneth Welsh was lured back to Montréal in 1982 to star in Denys Arcand's TV mini-series "Empire, Inc." as the wealthy scoundrel James Munro. He returned to Broadway in such long-running hits as Piaf, Whose Life Is It Anyway?, The Real Thing and Social Security, and played opposite Kathy Bates in the 1987 production of Frankie and Johnny. He also wrote and performed the acclaimed off-Broadway cabaret musical Standup Shakespeare. He won his third of five Gemini Awards in 1990 for his performance as convicted killer Colin Thatcher in the TV movie Love and Hate: The Story of Colin and Joanne Thatcher (1989), the first Canadian production ever to top the US Nielsen ratings. Welsh has portrayed a number of historical figures, including Thomas E. Dewey, Harry S Truman, Thomas Edison, James "Scotty" Reston, James Baker, Peter Lougheed and Lord Beaverbrook.

He has also scored notable stage successes with Toronto's Soulpepper Theatre Company, where he has starred in theDavid French plays Leaving Home (2007) and Of the Fields, Lately (2009) and in Under Milk Wood (2008), The Sunshine Boys (2012) and Rosencrantz and Guildenstern are Dead (2013).

He was awarded the Earle Grey Lifetime Achievement Award at the 1998 Gemini Awards. He received an honorary doctorate from the University of Alberta in 1999 and the Gascon-Thomas Award from the National Theatre School, and was made a member of the Order of Canada in 2004.

Kenneth Welsh credits his success to a combination of talent, training and perseverance, which he defines as "the absolute, blind belief that you have made the right choice."