Kensington Market sits on the traditional territory of the Haudenosaunee, the Mississaugas of the New Credit First Nation and the Huron-Wendat. In the late 1700s, this land was surveyed by British colonial administrators and then parcelled out to loyal government officials and military officers. This was done in an attempt to establish British aristocratic rule. Kensington Market sits in the middle of what was then called Park Lots 16, 17 and 18.

Bellvue (or Belle Vue) in 1885. The home of the Denison family once stood on the northeast corner of Bellvue Avenue and Denison Square in Kensington Market, Toronto. The Kiever Synagogue is now located here. 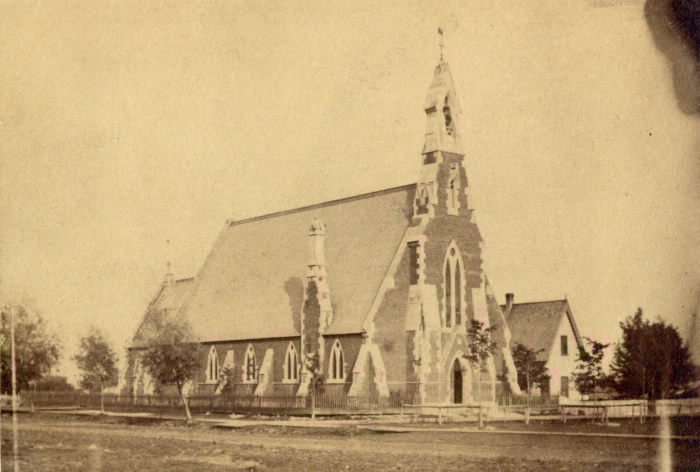 St. Stephen-in-the-Fields Anglican church (pictured here in 1864) still stands on the southeast corner of Bellevue Avenue and College Street, Toronto. This church is no longer in a field.
PreviousNext

In 1815, George Taylor Denison, a loyal member of the British militia, purchased Park Lot 17 and half of Park Lot 18, creating a 156-acre estate for himself and his family. That year he built a Georgian style home in the middle of this land and called it Belle Vue. In 1853, the Belle Vue estate was inherited by his youngest son, Robert Brittain Denison. Robert was also a loyal member of the British militia. In 1866, for instance, he commanded a provisional battalion during the Fenian raids. In 1858, he donated the land and funds necessary to erect the Anglican Church of St. Stephen-in-the-Fields, which still stands at the corner of College Street and Bellevue Avenue. This church takes its name from the fact that it was located in an open field when it was first built. By 1854, Denison had his land subdivided into smaller lots for development and within 30 years Kensington became a middle-class Victorian suburb for immigrants, who were mostly from the British Isles. The street names of the area still reflect this era: Denison Avenue, Oxford Street, Wales Avenue, Fitzroy Terrace and Kensington Avenue.

Kensington Market became a market in the early 1900s. Jewish immigrants, who originally settled in the Ward District of Toronto, began to move into the area and set up shops that served the specific cultural needs of their community. Toronto during the early 1900s was predominantly an Anglo, Protestant, stratified society. Poor immigrants were, for the most part, excluded from any form of social advancement. The Ward (or St. John's Ward) was located around the area of the city where Toronto's City Hall is currently located. In the late 1800s, immigrants from Italy and Jewish people, primarily driven from Eastern Europe and Russia by anti-Semitic persecution, poured into the Ward and found affordable yet deplorable places to live. Here they also found other immigrants from their home country and jobs in the needle trade in the sweatshops of local garment manufacturers. 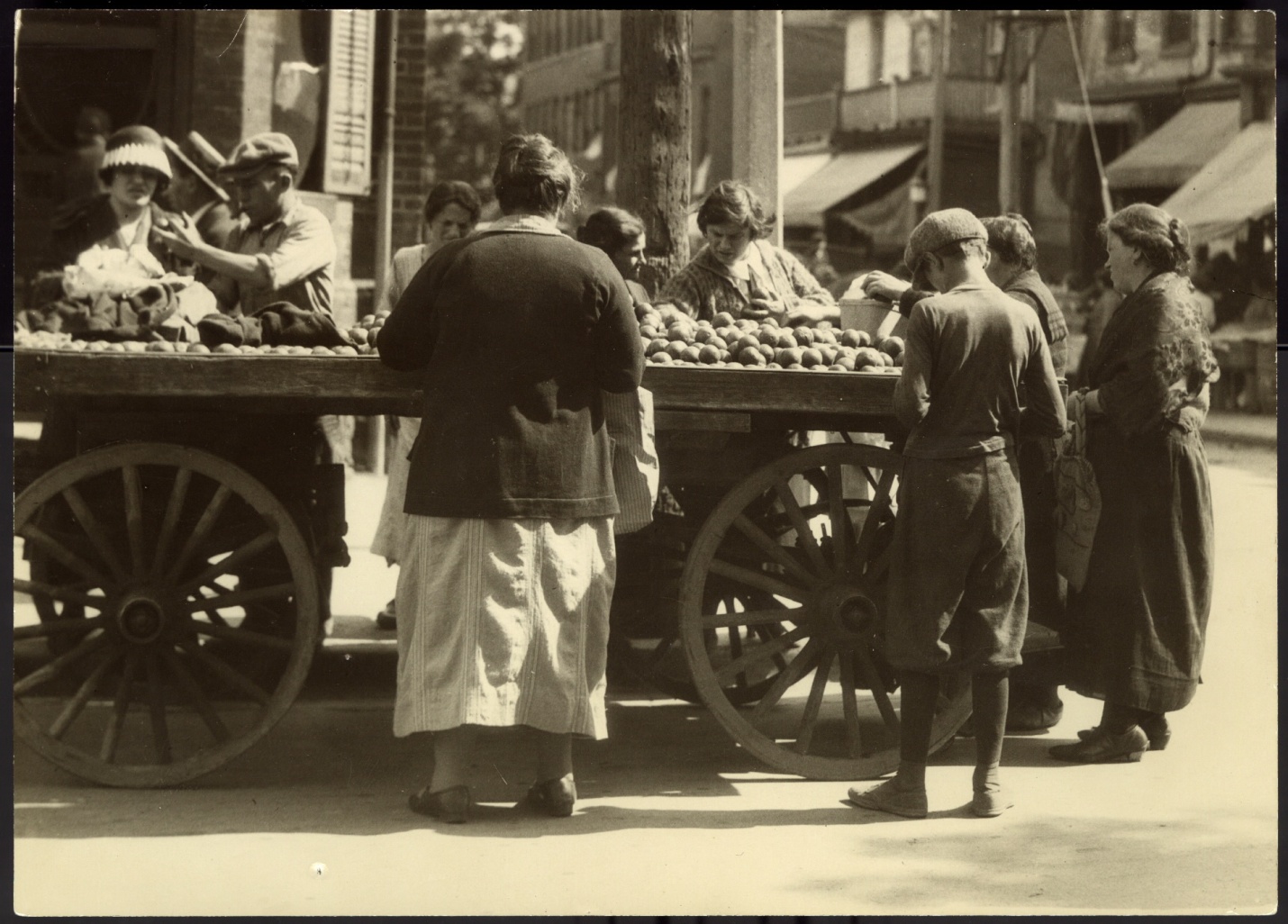 Jewish merchants, selling goods from carts, moved into the Kensington Market area in the early 1900s. This picture was taken in 1924.

The Jews of the Ward began to drift westward into the Victorian suburb of Kensington because of the overcrowded, ramshackle housing conditions of the Ward. They brought with them a fiercely independent spirit, their skills in the needle trade and the independent livelihood they earned from the goods that they sold throughout Toronto from handcarts. Later, stalls were built in front of their homes in Kensington, attracting other Jewish business to the area. Many merchants converted the ground floor of their homes into stores and continued to display their wares on the sidewalk as is done to this day. In 1900, there were approximately 3,000 Jews in Toronto. By 1913, this had increased to over 32,000. By 1931, there were 45,305 Jewish people in Toronto and 80 per cent were living in or around Kensington. Their arrival in the neighbourhood marked the beginning of Kensington Market, which at the time was known as the Jewish Market.

Life in the Jewish Market 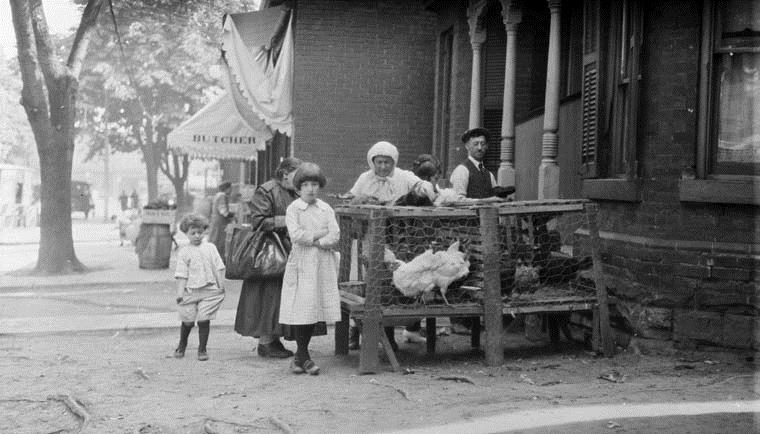 Morris Zamonsky's live chicken business at 18 Kensington Avenue, Toronto in 1922. Handcarts were replaced by stalls in front of houses in the 1920s. Live chickens were sold in Kensington Market until 1982. 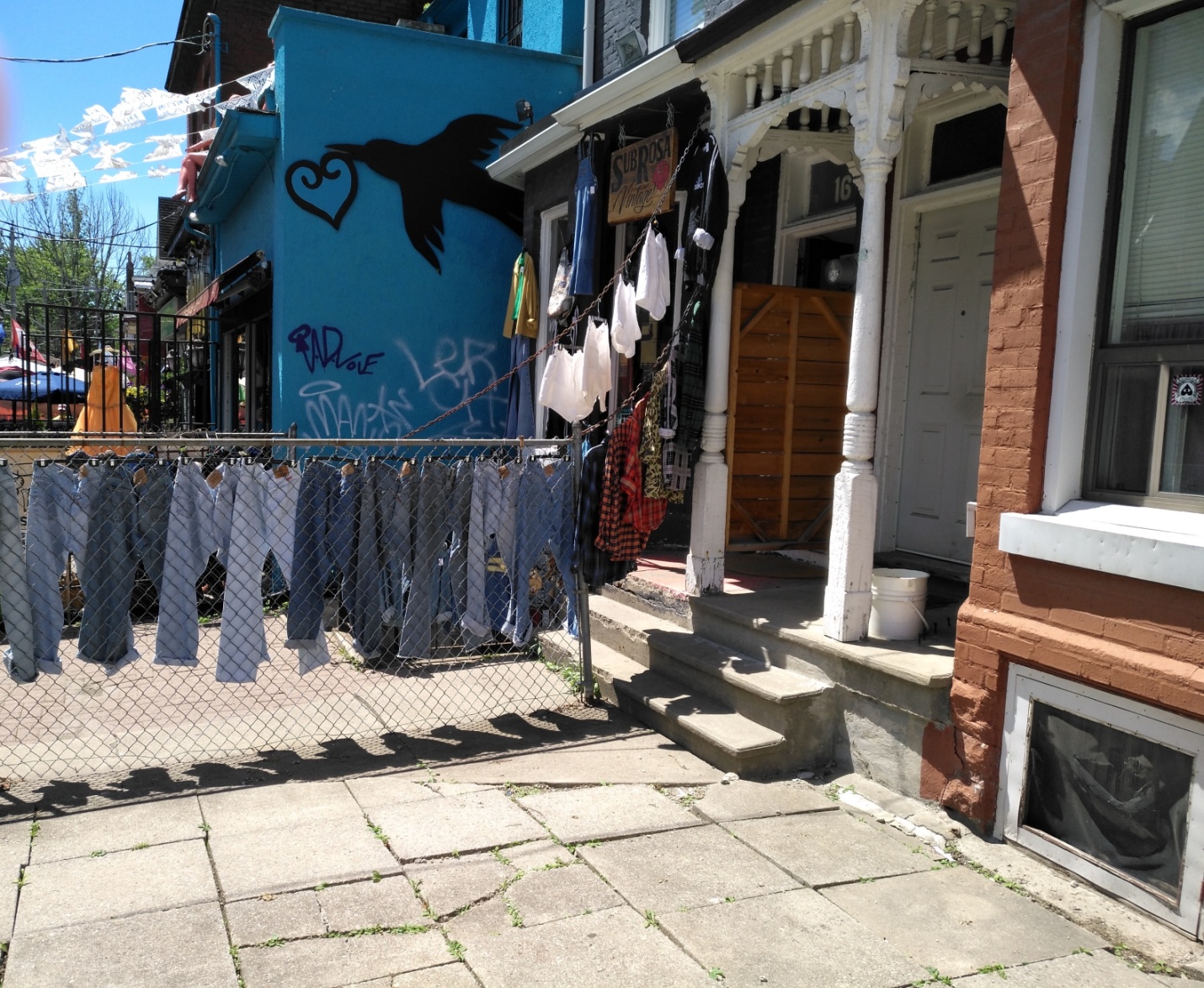 18 Kensington Avenue in 2017. Note that the support pillars for the porch are still the same, but the live chickens are gone.
PreviousNext

In the early 1900s, the Jewish Market was a microvillage that catered to the specific needs of the Jewish community that lived there. This is known in Yiddish as a shtetl. Vendors sold live chickens, ducks and fish, pickles and pickled herring in four-foot barrels and fresh kosher cheese made on site. The smell of food filled the air. It was a safe community meeting place, but sometimes anti-Semitic gangs would come to the market looking for a fight. The young men in the Market hid bottles behind the counters of their stores that they could grab as weapons if needed. A Kensington Market fish merchant once used a mackerel to smack an invader in the face.

To secure a job in a Gentile workplace at this time you were required to work on Saturday. This made finding a job impossible for the observant orthodox Jews of Toronto because Saturday is their Sabbath. The organization of Kensington Market was their attempt to earn a living and still maintain their independence without compromising their faith. This neighbourhood served not only Jewish immigrants but also Italians, Ukrainians, Black people and Hungarians. Discrimination against these groups was rampant outside of the secure and tolerant environment of Kensington. 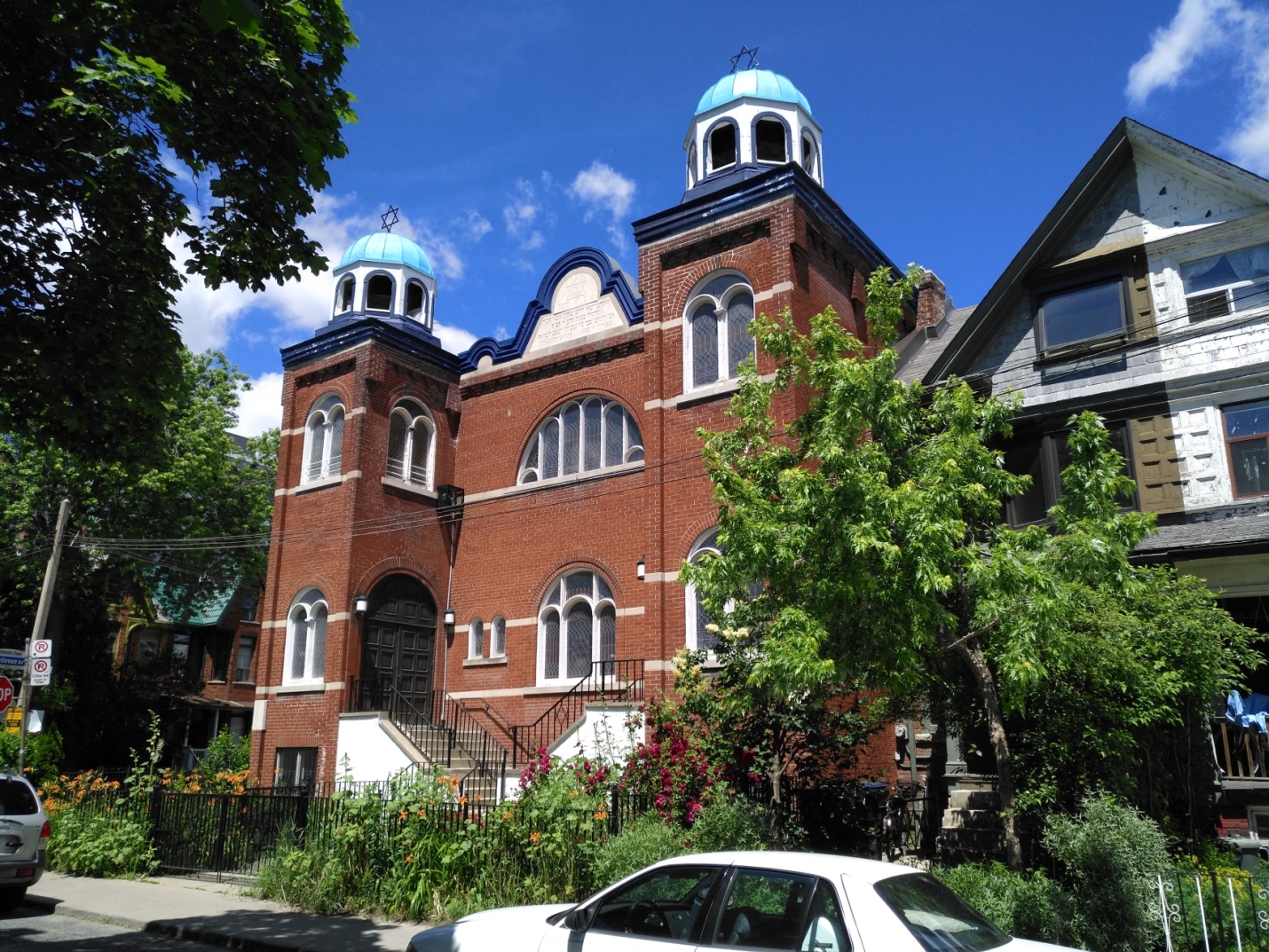 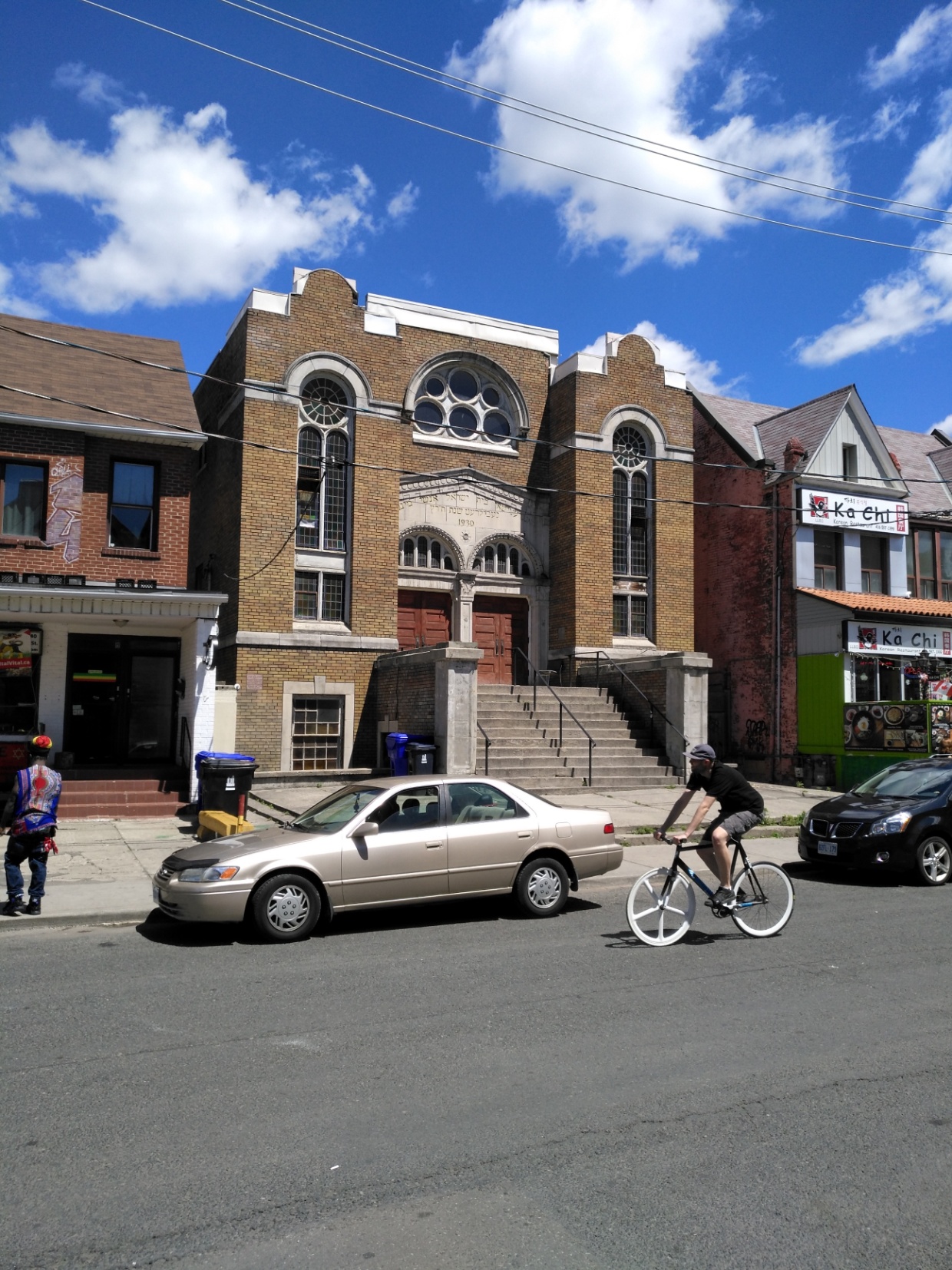 The Minsker Synagogue on St. Andrew Street, Toronto in 2017. This synagogue was also known as the "factory shul" because it was close to the garment factories that were then located on Spadina Avenue.
PreviousNext

At this time there were over 30 synagogues in Kensington Market; one on almost every corner, each representing a different town or province of Eastern Europe. Two synagogues from this era are still operating today. The Kiever Synagogue, built between 1924 and 1927 by Ukrainian Jews from Kiev who had escaped Czarist Russia, stands on the exact location of the Denison's Belle Vue estate. The congregation was called Rodfei Sholom Anshei Kiev (Pursuers of Peace, Men of Kiev). The Anshei Minsk Synagogue (or the Minsker) on St. Andrew Street opened in 1930 to serve Russian Jewish immigrants from the city of Minsk. This synagogue was also known as the downtown “businessman's shul,” since services were convenient to the sweatshop owners along Spadina Avenue. Sometimes referred to as “Red” Spadina Avenue because of the left-wing political views of the people who worked in the needle trade there, the street had a width that made it perfect for labour demonstrations, and strikes here were common during periods of unrest.

The largest group of immigrants to settle in Kensington Market following the Jews was the Portuguese. While Portuguese had been immigrating to Canada since before Confederation, it wasn’t until 1953, when the Canadian and Portuguese governments signed a labour migration agreement, that larger-scale immigration began. Many of these newcomers settled in the Market and they continued the Kensington Jewish tradition of adding storefronts onto the fronts of their homes. Portuguese bakeries, grocery stores and bookstores began to pop up to serve this new community. A Portuguese-language newspaper from a wide variety of political perspectives could also be found in the Market. The Portuguese fish stores, still located in the Market, carried the traditional Portuguese food staples of codfish and sardines as well as a wide variety of other fresh and frozen seafood. Today, these stores cater to the ethnically diverse shoppers who frequent the Market. The First Portuguese Canadian Club (FPCC) was also founded in the Market in 1956 to foster knowledge of Portuguese history, language and culture. In 1966, the FPCC also created a credit union to serve Portuguese immigrants. Post–Second World War immigration to the Market also brought large numbers of Hungarians to the area, adding to the neighborhood's international feel and flavour.

In 1974, the Canadian Broadcast Corporation (CBC) launched a new television show set in Kensington Market called King of Kensington. For the first time the national broadcaster was presenting a slice of Canada that featured the everyday life of the evolving multicultural tapestry of the country. The show was mostly lighthearted but did, on occasion, delve into the complexities of the Canadian newcomer experience. Al Waxman, who played the main character, the tenacious Larry King, actually grew up in Kensington Market. The show was popular with viewers, drawing 1.5 to 1.8 million viewers weekly leading up to its fourth season. It ran until 1980.

In the 1970s, second-hand or vintage clothing stores, now staples of the Market, began to arrive in the neighbourhood. As Chinatown expanded westward out of the old Ward neighbourhood in the early 1970s, the Market welcomed Indians, Chinese, Koreans, Vietnamese and Filipinos. Toronto's Chinatown is located immediately to the east of Kensington, but the border between these two ethnic enclaves is porous. Many Chinese businesses are now located within the traditional boundaries of the Market. In the late 1980s, refugees from Latin America also found their way into Kensington Market to start a new life. These stores still sell culturally specific food items, newspapers, gifts and clothing to a variety of diverse customers. 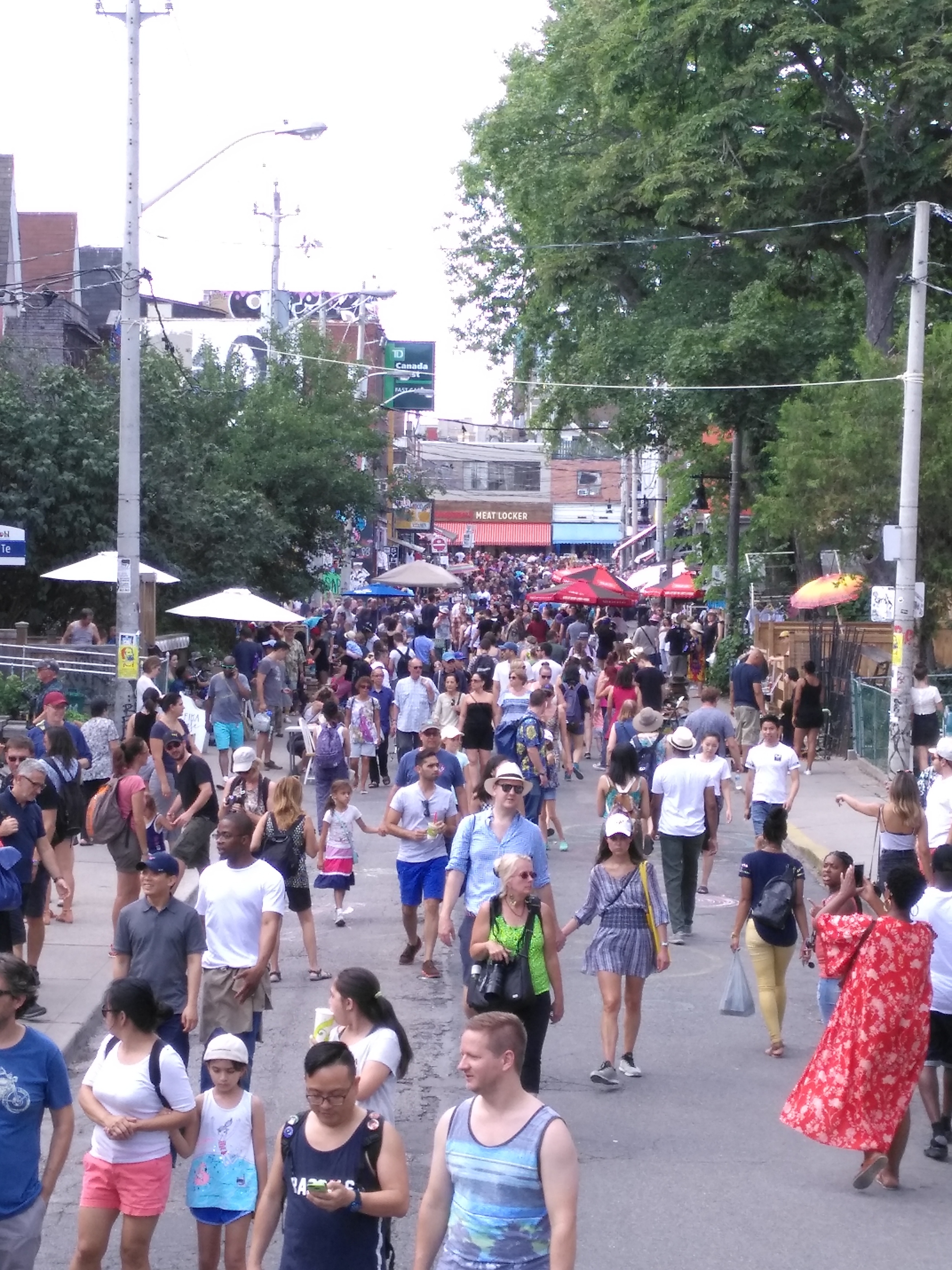 Pedestrian Sundays Kensington (PSK) happen on the last Sunday of every month from May to October in Kensington Market, Toronto.

Kensington Market continues to be a major reception area for new immigrants, creating a vibrant urban mixture of people and cultures. Historically what made this area a site of start-up immigrant enterprise was the affordability of the commercial retail space. This affordability is currently threatened by the latest wave of businesses to start up in the Market. High-end, expensive restaurants and bars are drawn to the area's bohemian ambiance and edgy street life. Commercial rental fees are spiralling upwards in Kensington Market, in some cases tripling overnight. This has forced some long-term businesses to move out of the neighbourhood, threatening its character. Community resistance to gentrification has been strong, well organized and specific. But what Kensington Market will look like in the future is unknown.