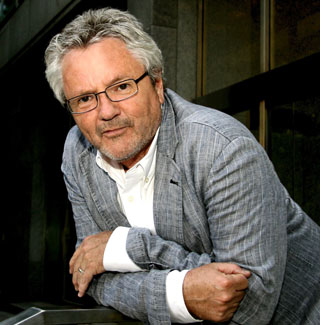 Kevin Tierney is an admired figure on the Canadian film scene and is an enthusiastic supporter of Canadian filmmaking.
(photo by Lois Siegel)
Kevin Tierney, film producer, writer (born 27 August 1950 in Montreal, QC; died 12 May 2018 in Montreal). Kevin Tierney's schooling and early work experience pointed toward a career as an educator. After graduating from South Shore Catholic High (now called MacDonald Cartier) in St. Hubert, Que., he attended Sir George Williams University and received a BA in 1971. In 1972 he took Masters of Arts courses in theatre at University College in Dublin, Ireland. In 1974 he received a Bachelor of Education from McGill and in 1978 he received a diploma in communications from Montréal's Concordia University.

Tierney went on to teach English as a Second Language in Chad and Algeria, and travelled to China for a stint as a professor of English at China's Lanzhou University. But the producer of Bon Cop, Bad Cop, the highest-grossing Canadian film ever made and winner of Canada's 2006 GENIE AWARD for best picture, was irrepressibly drawn to film. As a Montréal professor, Tierney wrote freelance articles about the art and commerce of film, his work appearing in publications ranging from Cinema Canada to Variety. Following an unpaid sabbatical to China, he opted out of teaching in 1986 to work as a freelance publicist with David Novek, who knew how to promote movies in the days when Canadian filmmakers had little marketing sense.

An exception was Tierney's client, Rock DEMERS, producer of the Tales for All series of humanistic children's films. Impressed by Tierney's quick intelligence, sophisticated film sense and business smarts, Demers invited the publicist to join his firm, Les Productions La Fête. Tierney worked as director of development and sales; then he produced during a period when Demers began expanding into new genres.

Tierney handled television mini-series, feature films and documentaries, some of them made for American cable and pay TV outlets like A&E and Showtime. The Life of P.T. Barnum (1999), a mini-series, collected 2 Emmy nominations while Bonanno: a Godfather's Story (1999) was a six-hour mafia epic that humanized its mob characters and earned GEMINI AWARD nods. Other shows included Armistead Maupin's More Tales of the City (1998), nominated for 5 Emmy Awards including best mini-series, and a 1994 A&E biography of Pierre Elliot TRUDEAU. Tierney also produced a documentary series about the charismatic prime minister; it aired on CBC and Radio Canada.

He was executive producer for the Gemini-nominated Choice: The Henry Morgentaler Story (2003), about the doctor whose advocacy led to a Supreme Court decision that legalized abortion in Canada. Tierney's One Dead Indian (2006), about the fatal shooting of an Aboriginal man during a land-claims confrontation between residents of an Ontario reserve and the provincial police, won a Gemini Award for best TV movie.

At the beginning of the new century, Tierney decided to produce movies on his own, debuting with a co-production involving US and UK partners. Written and directed by Lionel Chetwynd, Varian's War (2001) stars William Hurt as the real-life American intellectual who rescued European Jewish artists and thinkers from Nazi-occupied France.

The Canadian Film and Television Production Association presented Tierney with the 2009 Producer's Award, recognizing his work as a Canadian independent film producer whose most recent feature, in this case directed by his son Jacob Tierney and titled The Trotsky, had been invited to screen at the Toronto International Film Festival. Kevin Tierney donated the $10 000 cash prize to Concordia University to create the Pat and Bill Tierney Scholarship in honour of his parents.

Fluently bilingual and irreverently witty, the founder and president of Park Ex Pictures is an admired figure on the Canadian film scene. A fixture on panels at industry events and key festivals, Kevin Tierney is an enthusiastic supporter of Canadian filmmaking, offering his time to institutions like the Cinémathèque québécoise.