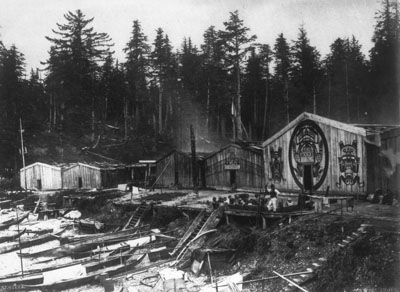 An 1880s photograph of the Xumtaspi-Nawittl village on Hope Island, BC. On the front of the house at the right are three painted family crests.

A close up view of Johnny Scow's house as it appeared circa 1918. 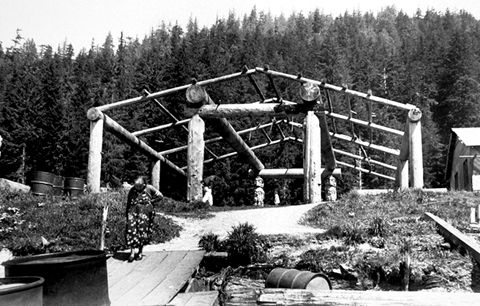 The two principal roof beams are supported by pairs of posts at the front and the rear; the latter are carved. Two additional beams at the eaves connect the corner posts. Lighter rafters and purlins are framed on the beams. The wall and roof would have been planked.
PreviousNext

The Kwakwaka'wakw peoples are traditional inhabitants of the coastal areas of northeastern Vancouver Island and mainland British Columbia. In the 2016 census, 3,670 people self-identified as having Kwakwaka’wakw ancestry.

Originally made up of about 28 communities speaking dialects of Kwak’wala — the Kwakwaka'wakw language — some groups died out or joined others, cutting the number of communities approximately in half. After sustained contact beginning in the late 18th century, Europeans applied the name of one band, the Kwakiutl, to the whole group, a tradition that persists. The name Kwakwaka’wakw means those who speak Kwak’wala, which itself includes five dialects. (See also Northwest Coast Indigenous Peoples in Canada.)

Archaeological evidence shows habitation in the Kwak’wala-speaking area for at least 8,000 years. Before contact with Europeans, Kwakwaka'wakw fished, hunted and gathered according to the seasons, securing an abundance of preservable food. Consequently, this allowed them to return to their winter villages for several months of intensive ceremonial and artistic activity. In addition, trails across Vancouver Island made trade possible with Nuu-chah-nulth villages on the west coast of the island.

Confiscated masks and other goods that belonged to the Kwakwaka'wakw (Kwakiutl) people who attended Dan Cranmer's potlatch in 1921 at the village of Alert Bay, Northwest Territories. 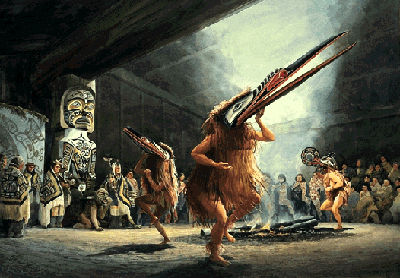 This dance is being performed at a southern Kwakwaka'wakw village on Quatsino Sound. Elaborate theatrical performances were an important part of Northwest Coast Indigenous life. 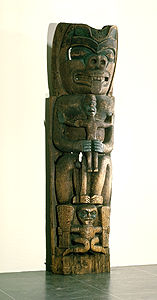 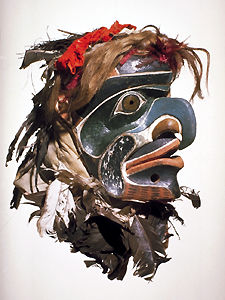 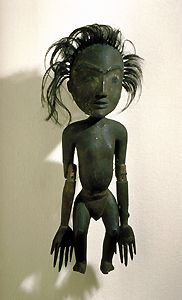 The culture of the Kwakwaka'wakw is similar to that of their northern neighbours, the Heiltsuk and Oowekyala peoples. The potlatch, for example, is a ceremony that the Kwakwaka'wakw and some other Indigenous nations in British Columbia have been hosting since well before European contact. Though it was once outlawed by the Indian Act, the potlatch remains an important part of modern community life.

A member of the Wakashan language family, Kwak’wala is related to other Indigenous languages in British Columbia, such as those of the Nuu-chah-nulth (Nootka), Heiltsuk (Bella Bella), Oowekyala and Haisla (Kitamaat). The Kwak’wala language is considered endangered;today, most Kwakwaka'wakw children speak English as their first language and there are few fluent speakers. In 2016, Statistics Canada reported 585 Kwak’wala speakers (though this figure does not specify their fluency level), with the majority living in British Columbia (98.3 per cent). As a means of preserving the language, some schools in the area sponsor programs in Kwak’wala.

In 1792, Spanish explorers Dionisio Alcalá-Galiano and Cayetano Valdés, and British Captain George Vancouver encountered most of the south Kwakwaka'wakw groups. Farther north, in 1849 the Hudson's Bay Company established Fort Rupert, which operated until about 1877, when it was sold to Robert Hunt, the fort’s last factor (trader). George Hunt, Robert's son, worked with anthropologist Franz Boas, and together they recorded a large body of material on the language and culture of the Kwakwaka'wakw.

In 1884, a federal law prohibiting the potlatch threatened to destroy Kwakwaka'wakw culture. In 1921 a large potlatch at Village Island resulted in the arrest of 45 people. Twenty-two were imprisoned; their ceremonial goods confiscated. Knowing these masks and other ritual objects had been wrongfully taken, the Kwakwaka'wakw in 1967 initiated efforts to secure their return. The National Museums of Canada agreed to return that part of the collection held by the Canadian Museum of Civilization, on the condition that two museums be built, the Kwakiutl Museum, now the Nuymbalees Cultural Centre, in Cape Mudge and the U'mista Cultural Centre in Alert Bay. (See also Northwest Coast Indigenous Art.)

Traditionally fishers, the Kwakwaka'wakw continue to fish commercially in a highly-competitive industry. Hereditary chiefs still pass on rights and privileges at potlatches, but band government is conducted by elected councillors.

A number of original villages have been abandoned as inhabitants have moved to communities such as Alert Bay, Campbell River and Port Hardy to be closer to schools and hospitals.

The Kwakwaka’wakw (listed as the Kwakiutl Nation) are in stage four stage four of the British Columbia treaty process. There are six stages in total, with the end result aimed at self-government, monetary and land resources and the acknowledgment of Indigenous rights and title to territory. (See alsoTreaties with Indigenous Peoples in Canada.)