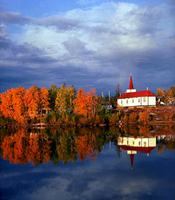 Fur traders frequented this site in northern Saskatchewan as early as the 1770s (photo by Douglas E. Walker). \n
PreviousNext

La Ronge, Sask, incorporated as a town in 1976, population 2304 (2011c), 2725 (2006c). The Town of La Ronge is located on the west shore of Lac La Ronge in northern Saskatchewan. Origin of the name is uncertain but it is likely associated with the beaver and the French verb ronger ("to gnaw"). Fur traders such as the Frobishers and Peter Pond frequented this site in the 1770s, and HBC posts operated intermittently in the area into this century.

Occupation of the present townsite started when Archdeacon John Alexander Mackay established a residential school and sawmill (1898). Not accessible by road until 1947, the largely Indigenous community grew very slowly for many years. But it has more than doubled in size since 1971, expanding as a tourist and administrative centre and departure point for prospectors.