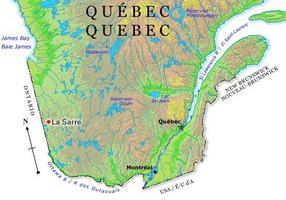 History
Founded in 1917, it was one of the first agricultural centres to be settled when the transcontinental railway opened up the Abitibi region around 1910. The place was originally called Wabakin, an ALGONQUIN expression meaning "white fish river," referring to Rivière La Sarre which flows through the town and into Lac Abitibi. It was later named after the La Sarre regiment, which had been sent to NEW FRANCE in 1755 and gained fame at the Battle of the PLAINS OF ABRAHAM.

Present Day
La Sarre's agricultural and forest industries have made it one of the principal urban centres in Abitibi-Témiscaming. The town is located in the heart of rich, agricultural lands around Lac Abitibi. Its economy is largely dependent upon its sawmills and wood-processing plants.